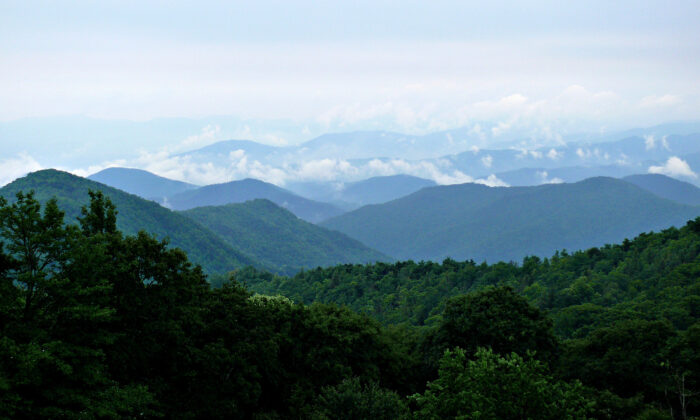 Clouds breaking up after a rainy morning in the Blue Ridge Mountains on July 2, 2007. KenThomas.us/Wikimedia Commons
Viewpoints

MOUNTAIN CITY, Georgia—Just off U.S. Highway 23, along the spectacular views of the Blue Ridge Mountains, T.J. Smith spends his days continuing the tradition of the iconic Foxfire Fund: an enterprise driven by young people whose respect for the land and culture, and understanding of the importance of preserving that culture’s stories, has persevered for more than 50 years.

If you grew up in Appalachia, you likely owned a set of the Foxfire books or had the Foxfire magazine in your home, giving you an opportunity to see your very heritage in those pages.

They carried the stories of the America that stretches 1,500 miles diagonally along the Appalachian Mountains, from southern New York through great big swaths of Pennsylvania, Ohio, West Virginia, Virginia, Kentucky, Tennessee, Mississippi, parts of both Carolinas, Georgia, and Alabama.

If you didn’t grow up in Appalachia, you likely have a very skewed view of the people and their lifestyle, associating them with being mostly white, mostly uneducated, mostly backward, and mostly nostalgic for a different time.

You would be wrong.

That is why Foxfire is so important.

“Foxfire began as a school project started in a classroom in 1966 at the Rabun Gap-Nacoochee School,” explained Smith, president and executive director of the nonprofit. “The kids didn’t really have an interest in Shakespeare and Ethan Frome and whatever else they were being asked to read. So, in response, the teacher just said: ‘OK, I give up. What do you want to do? What are you interested in? You don’t want to do this. You don’t want to do that. What will you do?'”

“They were interested in their community, themselves, their families, their friends and their neighbors,” Smith said. “So, they were told, ‘Go out and talk to people in your community about what’s important to them about their lives or about their experiences, and see what you find.'”

It turns out that when they came back to class to write about what they found, the essays were really interesting, so interesting that they decided to find a way to put them in the public space. They created a magazine and found a way to pay for the printing by selling advertising.

“The first Foxfire magazine was printed in the spring of 1967, and we’ve been publishing the magazine ever since,” Smith said.

When the magazine sold out in less than a week, and in consecutive editions after that, and the children kept getting mountains of letters asking for subscriptions, Smith said that built momentum and got them money: “They got a grant from NEH in 1971 for recording equipment and new cameras, and then in ’71, E.P. Dutton, the book publishing company, came to them and said, ‘We’d like you to do a book.'”

And the legend was born.

The people they interviewed, explained Smith, had had vastly different experiences than those children, even by 1966 standards: “The people they were interviewing were folks that were born in the latter part of the 19th century. Our kids had a lot of modern luxuries that these folks couldn’t even fathom.”

“This book is dedicated to the people of these mountains in the hope that, through it, some portion of their wisdom, ingenuity, and individuality will remain long after them to touch us all,” reads the forward of the first Foxfire book, which has 23 chapters, including ones titled “Building a Log Cabin,” “Mountain Recipes,” and “An Old Chair Maker Shows How.”

The book project led to over $9 million in book sales and grew a network of more than 1,500 teachers across the country who encourage the notion of journals as learning tools.

These books bring to life a window into American culture that doesn’t just need to be celebrated but also deserves respect, and appreciation for what was and what still is: something very different from the stereotype that resides in many people’s heads.

“The thing people miss about Appalachia is the diversity of southern Appalachia,” Smith said. “We have a proud indigenous culture that still remains. We have a Hispanic population that’s been here for many, many generations who’ve been part of the agricultural story of this region, and we’ve got an African American population that’s been here almost since the beginning. That has contributed many, many great things to this culture.”

For example, Smith says, “People in Appalachia uniquely adhere to both new technologies while still respecting and continuing regional traditions, and sometimes when it comes to, say, cooking, they have been ahead of the farm-to-table movement for hundreds of years.”

He says Appalachia has been a very maligned, misunderstood, mischaracterized region, but Foxfire elevates the conversation about the region through the magazine, the books and now, a podcast.

Salena Zito has held a long, successful career as a national political reporter. Since 1992, she has interviewed every U.S. president and vice president, as well as top leaders in Washington, including secretaries of state, speakers of the House and U.S. Central Command generals. Her passion, though, is interviewing thousands of people across the country. She reaches the Everyman and Everywoman through the lost art of shoe-leather journalism, having traveled along the back roads of 49 states.