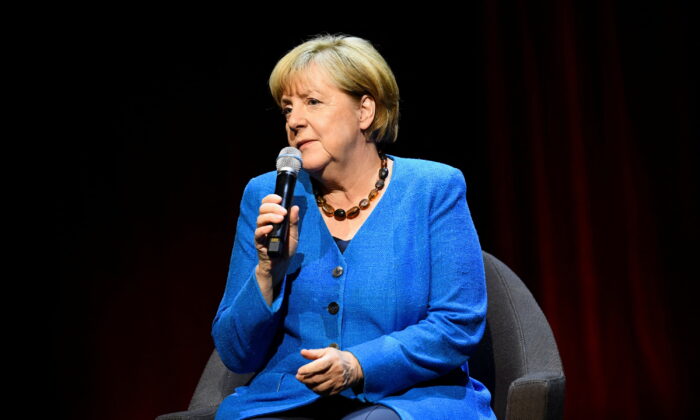 Former German Chancellor Angela Merkel speaks during a talk about "the challenging issues of our time" with author Alexander Osang (not pictured) at the Berliner Ensemble theatre in Berlin, Germany, on June 7, 2022. (Annegret Hilse/Reuters)
Viewpoints

The adoration was so over the top that in 2015, Time magazine named Merkel its “Person of the Year.” It described her as the “Chancellor of the Free World.”

Time owes whatever readers it has left a solemn apology. Today, Germans are suffering the bitter fruits of nearly every major economic and geopolitical decision that Merkel made as chancellor.

Start with the German economy that she attempted to reset for the 21st century, which is reminiscent of how President Joe Biden explains to inflation-weary voters that we are going through “an incredible transition.”

But Merkel’s Germany was ahead of us in its “transition.” Today, the German economy is in tatters. A recent headline from Business Insider summarized the chaos: “German Industries Could Collapse Due to Russia Natural Gas Supply Cutbacks.” The Daily Telegraph recently described Germany as “the sick man of Europe.” Things are getting so desperate that the Germans are now considering rationing gas for their major industries to keep the lights on.

How did one of the five wealthiest countries in the world so quickly careen into this economic ditch?

It was Merkel’s vision of a new Germany. Merkel was the one who made the decision a decade ago to move Germany away from fossil fuels and nuclear power and instead “go green.” Her green energy crusade, which environmentalists heralded as a model for the world, nearly bankrupted the German manufacturing economy until the entire solar and wind energy debacle was scuttled. (Sadly, Biden apparently never got that memo.)

It was Merkel’s decision, against the advice of then-President Donald Trump, to build the Nord Stream pipeline. When Trump sagely warned in 2018 that Germans would rue the day they became overly reliant on Russian President Vladimir Putin’s energy, Merkel’s administration openly scoffed.

Putin isn’t the only one getting rich from Merkel’s blunders. She negotiated trade deals with China, blatantly undermining Trump’s strategy of economically isolating the Beijing menace. She chose to align Germany with rogue and militaristic regimes in Russia, China, and Iran. This helped undermine NATO and Germany’s post-World War II close ties with the United States.

She refused to pony up the 2 percent of GDP that Germany owed NATO for Europe’s defenses, and she bristled when Trump demanded that be raised to 4 percent. Perhaps if the Germans and Europeans had heeded Trump’s advice, the debacle of Ukraine wouldn’t have happened.

The American media, during all this time that Merkel was steering Germany over a green energy cliff, took Merkel’s side in her open dispute with Trump. Susan Glasser of the New Yorker snorted in 2018 that Trump had “made war on Angela Merkel and Europe” and the NATO countries were “[running] out of patience with the President.”

That statement is foolish today, given the collapse of the euro and the economic downturn throughout the continent.

Even as an environmentalist, Europe’s savior was a flop. Merkel hogtied German industries to expensive and unreliable “renewable” energy by spurning natural gas and closing nuclear plants. The experiment failed miserably, and now, Germany is vastly increasing the share of its power that comes from burning coal. That’s no strategy to stop climate change.

Under Merkel’s weak leadership, the euro was supposed to replace the dollar as the world currency soon. Instead, the euro is a currency in collapse. Even the Russian ruble is stronger.

Merkelism can be summarized as a strategy of patronizing enemies and alienating allies. Now, with 20/20 hindsight, it’s clear that the legacy of Merkelism is a chaotic world and a diminished Germany.

It turns out that peace through weakness is a failed national and economic security strategy. If Merkel was the “Chancellor of the Free World,” why is it that today’s world is not safer?

And it isn’t a more prosperous place.

In short, every major decision she made regarding global affairs made the world more dangerous, less free, and less prosperous. She was to Germany what Biden has been to the United States—a complete and dismal failure.

Let’s hope we figure this out more quickly than the Germans did.