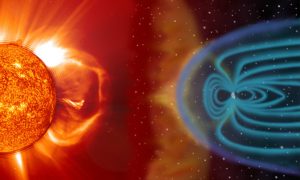 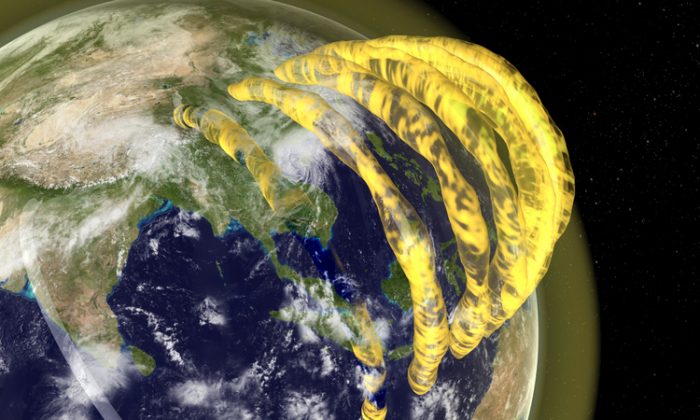 How an Undergraduate Discovered Tubes of Plasma in the Sky

The answer is a combination of an amazing new telescope, a very smart student and an unexpected fusion of two areas of science.

Here is how it all happened, from my perspective as the academic who supervised the project at the Sydney Institute for Astronomy.

My research involves studying the variability of stars and galaxies using a new radio telescope, the Murchison Widefield Array (MWA). My colleagues and I were worried about the ionosphere being a problem for this research, because at low frequencies it can distort the radio signals that we receive from outer space.

This makes celestial objects appear to jiggle around, be stretched and squeezed, and change in brightness. I knew this would be a problem for my plan to study how the brightness of stars and galaxies varied, so I wanted to find out how severe the distortion was.

The ionosphere is the part of the Earth’s atmosphere that has been ionised by radiation from the sun. It is made up of a plasma in which the gas molecules have lost one or more electrons. It stretches between 50 to 1,000 kilometres above the Earth’s surface (commercial aeroplanes typically fly at 10 kilometres above the Earth). Importantly, it refracts radio waves, affecting radio communication around the world.

At the beginning of last year I had a final-year undergraduate student, Cleo Loi – who also contributed to this article – looking for a research project, so I gave her the task of investigating how much the ionosphere was affecting astronomical observations with the MWA.

Around that time, a postdoctoral researcher from Curtin University, Natasha Hurley-Walker, was examining MWA data and came across a night that looked rather unusual.

Celestial objects were dancing around wildly, distorting strongly in shape and flickering in brightness. She flagged this night as one that the ionosphere had rendered unusable for our astronomy research.

Cleo then developed a way of visualising the distortions caused by the ionosphere on the images of distant background galaxies. She took the data Natasha had identified and applied her analysis to it.

When she showed me and other researchers the distortion maps she was generating, we were surprised to see huge waves of correlated motion rippling through the image. They looked like spokes radiating from a point outside the image.

To try to work out what they were, Cleo transformed the coordinates from a celestial reference frame (that astronomers usually use) to an Earth-based reference frame, which is fixed with respect to the atmosphere. This crucial transformation revealed that the bands were hanging almost stationary in the Earth’s sky.

In the process of writing up our research, we emailed Cleo’s preliminary results to collaborators. The MWA collaboration consists of hundreds of radio astronomers and engineers from Australia, New Zealand, the United States, India and Canada. They were quick to respond with a list of suggestions as to what the bands might be.

It is a critical part of science that good scientists respond to unexpected results with scepticism, particularly if they come from an inexperienced student. But the sheer volume of emails was initially quite overwhelming for Cleo. However, she stayed focused on solving the problem.

The suggestions ranged from possible problems with the telescope, the observing set-up, the imaging process and Cleo’s analysis techniques. Hundreds of emails were exchanged over a few months as Cleo tested and ruled out each suggestion.

Once we had run out of things to test we were left with an interesting dataset, an unexplained phenomenon and an increasing suspicion that the strange distortion pattern was a real effect caused by the ionosphere.

As she was preparing her honours thesis, Cleo had a geometrical insight into explaining the radial spoke-like pattern. She realised that a set of parallel lines viewed at an angle would appear to converge due to perspective distortion, like train tracks going into the distance.

However, without much knowledge of geophysics, it was several weeks until she made a second critical link: the layout of the spokes matched the Earth’s magnetic field. These strange tubular structures were tracing the magnetic field lines, which are parallel to one another but at an angle to the ground. The agreement was perfect.

Armed with solid evidence, Cleo and I got in touch with geospace physicists to help us interpret what we were seeing. Suggestions to explain the phenomena included plasma bubbles, travelling ionospheric disturbances and ultra-low-frequency waves.

Finally, Fred Menk from the University of Newcastle suggested they might be “whistler ducts”. These are cylindrical structures aligned to a magnetic field, where the electron content is higher inside than outside. They are thought to guide the propagation of electromagnetic waves called “whistlers” in the same way that optic fibres guide light.

Whistler ducts had never been seen before, but all their properties deduced by scientists over the years matched what we were seeing with the MWA. Except for one thing: we didn’t know how high they were.

Until now, we had only used the MWA to take two-dimensional pictures of the sky. Whistler ducts exist at very high altitudes, and an altitude measurement was necessary if we were to confirm them as a known phenomenon.

At that point Cleo had a brainwave. She realised that the MWA could be used stereoscopically to achieve 3D vision, like a giant pair of eyes. By splitting the data from the eastern and western receivers of the MWA, she revealed a slight parallax shift in the distortion pattern that let us triangulate the altitude: around 600km above the ground.

We were all astounded that this idea had worked, confirming that these were likely to be whistler ducts.

It has been an exciting year of research. We started out with an astronomy question and found a surprising answer in geospace physics. To the layperson, these might seem like the same field, but to scientists focused deeply within their narrow field of expertise, the gap is wide.

Cleo has shown how a talented but novice researcher can have an advantage over experienced researchers. By approaching the problem without preconceptions she was able to bridge these two disciplines and use a novel technique on a new radio telescope to discover plasma tubes in the sky.

Tara Murphy is Senior Lecturer in Astrophysics at University of Sydney.