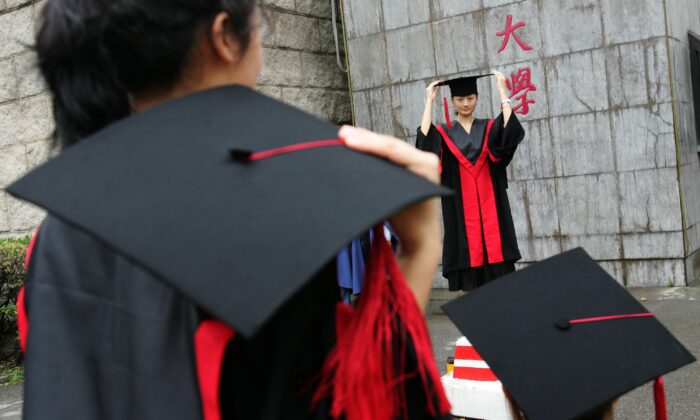 Graduates pose for pictures during a graduation ceremony at Renmin University in Beijing on June 29, 2006. (China Photos/Getty Images)
US-China Relations

Chinese investor Zhang Lei and his Asia-based investment firm has helped some of the United States’ most elite colleges, including Yale, Stanford, and Princeton, manage their capital.

He has also funded an artificial intelligence research institute at a major state-run university in China to develop technology to benefit government authorities.

At Yale, where he earned a master’s degree from the School of Management, Zhang in January 2010 donated $8,888,888, a figure that represents an auspicious amount in Chinese culture.

According to Zhang’s biography on his company’s website, he’s currently on the board of trustees at Yale and chairs the university’s Asia Development Council, an alumni group that seeks to bolster the school’s ties in Asia.

Yale officials didn’t immediately respond to a request for comment by The Epoch Times regarding Zhang’s donation.

Zhang also made donations to his undergraduate college, Renmin University, which is located in Beijing. After making a 10 million yuan donation (about $1.4 million) in 2010, he was appointed vice chairman of the university’s board of directors.

In June 2017, he donated 300 million yuan (roughly $45.1 million) to the school, which used the funding to establish the Gaoling School of Artificial Intelligence (Gaoling AI), offering undergraduate education and graduate-level research in the field of AI.

A closer look at the institution reveals ambitions to fulfill the Chinese regime’s national interests.

Renmin, which was established in 1937 by the Chinese Communist Party (CCP), is one of China’s top five universities. Prior to the Party taking control of China in 1949, it was one of the main schools providing political training for CCP members.

On its website, the university boasts programs that have trained Beijing’s top leaders in the Politburo, a 25-member body of the Party’s elite.

The university is also an active participant in the CCP’s overseas propaganda operations, having established 12 Confucius Institutes overseas, according to the school’s website. A growing number of higher education campuses in the United States, Australia, and Canada have recently shut down some Confucius Institutes over concerns about their role in stifling academic free speech.

Renmin didn’t have an AI department prior to Zhang’s donation.

The Gaoling AI website clearly states on its “about us” webpage that the school is “supported by Zhang Lei’s contributions.”

At the opening ceremony for the AI school held on April 22, Renmin President Liu Wei said that “Renmin, Zhang, and Hillhouse Capital all agreed to use Zhang’s donation to build Gaoling AI.”

According to the school’s reports, officials from Yale, Princeton, and MIT also attended the ceremony.

The ceremony also served as the “unveiling” for two research centers within the school. Their Chinese names can be translated as “center of AI research for social governance,” and “international communications and big data AI lab.”

The AI center is a joint project of Renmin and the China Association for Science and Technology, a professional organization whose charter statement says that its mission is to “serve as a bridge between the Chinese Communist Party” and science and tech professionals.

During the unveiling ceremony, the association’s Party secretary, Huai Jinpeng, said the AI center aims to follow Party leader Xi Jinping’s direction “to develop an AI system that is suitable for the government to provide services and make policy decisions.”

The AI lab is a joint project of Renmin and China International Publishing Group, a state-run publisher directly under the supervision of the CCP’s propaganda department.

Developing AI technology is one of China’s national priorities, as part of Beijing’s plans to build tech sectors that can compete on a global scale.

At a science and tech national conference held in May 2016, Xi Jinping spoke of the need to make breakthroughs in big data, cloud computing, and AI.

In July 2017, China’s State Council, a cabinet-like agency of the central government, announced a detailed strategy outlining China’s desire to become a “world leader” in AI by 2030.

But AI applications in China have alarmed human rights observers.

For example, China plans to install the world’s largest surveillance camera system, which will be equipped with AI facial recognition capabilities that collect data on citizens in real time. The Chinese regime plans to install 220 million of these cameras across the country by 2020.

Such equipment is already employed by Chinese authorities to monitor and suppress dissidents, activists, and minority groups, especially in the region of Xinjiang, where the local Uyghur Muslim population faces unprecedented surveillance in their daily lives.