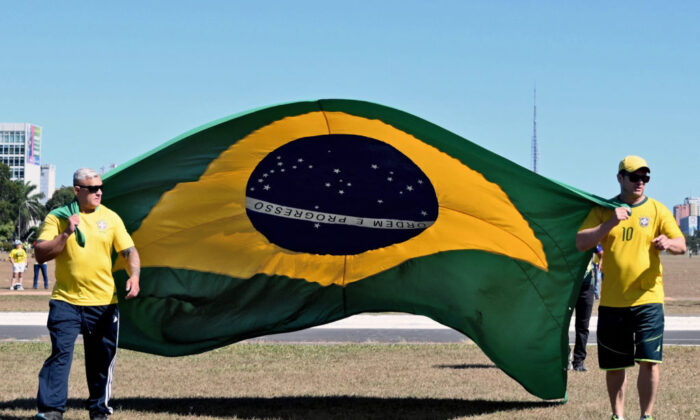 Supporters of Brazilian President Jair Bolsonaro carry a national flag as they head to the National Congress building in Brasilia, Brazil, on May 1, 2022. (Evaristo Sa/AFP via Getty Images)
Viewpoints

When the then head of the top electoral court in Brazil, Supreme Court Justice José Dias Toffoli, officially declared Jair Bolsonaro the winner of the 2018 presidential elections, he made this unusual pronouncement: “The future president must respect institutions, must respect democracy, the rule of law, the judiciary branch, the National Congress, and the legislative branch.” Those remarks were taken to be a rebuke of the new president’s conservative views.

However, it is ironic that a major threat to democracy actually comes from a highly politicized judiciary.

To give an example, on Feb. 21, 2021, Justice Gilmar Mendes of the Supreme Court met the then president of the House of Representatives, Rodrigo Maia, and 10 other federal congressmen, to discuss what they should do about the Brazilian president.

He told these politicians that ending Congress and the court’s “kindness” towards the democratically elected leader was urgently required. Mendes proposed “a harsher attack” against Bolsonaro—he wanted “zero tolerance” with the president.

To give another example, in May 2021, Celso de Mello, then the longest-serving member of the Supreme Court, sent a text message to his judicial peers comparing the Brazilian president to Adolf Hitler. He said to his colleagues in the court that it was “necessary to fight” Bolsonaro.

During his talk at the ninth Lisbon Legal Forum in Portugal, on Nov. 16, Dias Toffoli commented that “presiding over Brazil is not easy” and that he and his colleagues in the Court “have taken action to mitigate the impacts of the pandemic in Brazil.”

“We already have a semi-presidentialism with a moderating power control that is currently exercised by the Supreme Court,” he said.

Of course, the system of government in Brazil, as per its Constitution, is presidential. This supposed “semi-presidentialism” is found only in the creative minds of such activist judges. It amounts, in practice, to a usurpation of executive powers by the unelected judicial elite.

The process to appoint Supreme Court justices in Brazil is practically identical to that in the United States. These top judges are nominated to the court by the president and then must be confirmed by the absolute majority of the Senate after a confirmation hearing.

However, the last four years in Brazil have been characterised by a remarkable rise in judicial activism. A question often raised is whether judges in Brazil are becoming an entrenched oligarchy devoid of any accountability.

We are seeing in Brazil the installation of a judicial elite endowed with extraordinary powers that allow them to make advanced decisions against laws that conflict with their personal interests. Some Brazilian judges actually believe that the process of adjudication is entirely subjective in its nature.

This is how former Supreme Court Justice Marco Aurélio Mello described his own peculiar method of deciding cases: “Whenever I face a controversial case, I do not look for the dogma of the law. I try to create within my human character a more adequate solution.”

Activist judges like him often interfere in legislative affairs and government policies so as to advance their more “progressive” agenda. On June 26, 2019, for example, Justice Luis Roberto Barroso ordered that transgender prisoners who were born biologically male should go to women’s prisons because, in his opinion, “this is the only measure to allow them to have a social environment compatible with their gender identity.” A year later, he also decided that homophobia and transphobia should be classified as crimes of racism under the existing anti-discrimination legislation.

One serious problem in Brazil is the existence of so-called “monocratic decisions,” where a single judge can rule on a variety of matters with wide-ranging ramifications. Each individual judge has the power to suspend a hearing without further examination and to adjourn a hearing indefinitely, as well as to issue interlocutory injunctions on matters of substantial impact.

Between 1988 and 2018, it is estimated that 72 percent of all cases decided by the Supreme Court were based on these “monocratic decisions.”

In Brazil, Supreme Court justices have highly ambitious political goals and make decisions accordingly. In one of his academic articles (pdf), Justice Barroso attempts to justify his activism by claiming that his court “enjoys a position of supremacy” over the other two branches of government—executive and legislative. This “supremacy,” he argues, is related to the interpretation of what the law ought to be, hence “requiring an exercise of political power by the court with all its implications for democratic legitimacy.”

Barroso openly advocates broader participation of the Court in “the concretisation of constitutional ends and values,” which results in a higher degree of interference in the sphere of activities more often associated with the legislature and executive branches.

In many instances, there would not be an actual conflict of powers because, according to him, there would only be the occupation of empty spaces left by the other branches of government, so that unelected judges like him could simply step in.

Judges Do Not Make the Law

At the heart of Barroso’s method is the notion that, in deciding a case, a judge should improve the law if this area of law appears defective. This can be justified by the legislator’s apparent failure in reforming the law so the judges should therefore assume the task.

Lord Reid, one of the most outstanding judges of the 20th century, answered to the claim that it is the task of judges to do what the legislator should have done, but failed to do, by saying that “where parliament has feared to tread it is not for the courts to rush in.”

The constitutional role of judges is not to make law but to provide justice according to law. Judges swear to apply the existing law and not to be engaged in controversial debates about them, and certainly not to create “new laws.”

According to Dyson Heydon QC, a retired Australian High Court justice (pdf), “a judge who dislikes the constraints of membership of the judiciary because it prevents the fulfilment of a particular program or agenda, should leave the group, join or start a political party, and seek to enter a legislature.”

To claim that unelected judges have any role in improving the law is, in the words of former Chief Justice of Australia Murray Gleeson, that “judges have no right to base their decisions about the validity of legislation upon their personal approval or disapproval of the policy of the legislation. When they do so, they forfeit their legitimacy.”

A recent poll carried out by DataPoder360, released on June 15, reveals that 26 percent of Brazilians consider the performance of Supreme Court justices bad or horrible. They are perceived positively by only 23 percent of the population. These results indicate a serious lack of confidence in members of the Supreme Court.

On Sept. 7, 2021, hundreds of thousands of Brazilians flooded the streets of major capital cities to protest against judicial activism. “Our country can’t continue to be held hostage by a few individual judges,” said Bolsonaro.

That was an apparent reference to Supreme Court justices, especially Alexandre de Moraes and Luís Roberto Barroso, whom Bolsonaro accuses of constantly attacking him and blocking his ability to govern on behalf of the people. They had ordered an investigation of the president and his inner circle over false allegations of “spreading fake news” within the government.

According to J.R. Guzzo, a well-known journalist in Brazil, “the 11 members of the Supreme Court seriously believe that they can do whatever they want. They can release corrupt politicians and drug dealers …. They can even arrest congressmen and journalists for crimes of opinion.”

Unfortunately, there is only one thing these members of the highest judicial court in Brazil appear to be hopelessly unable to do: to uphold the Brazilian Constitution. As a result, the main threat to democracy and the rule of law in Brazil comes from an unelected judicial oligarchy devoid of any accountability and democratic legitimacy.