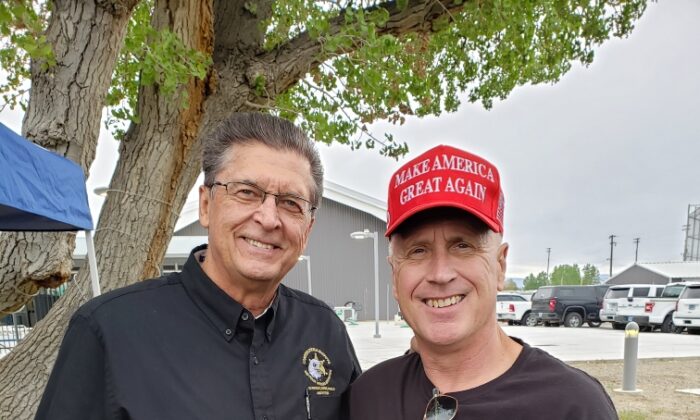 In the aftermath of the Free Britney Spears movement, a retired sheriff who helped free his friend’s elderly mother from a court-appointed guardianship has landed in Washoe County jail.

Stewart Handte—once the Reno-Sparks Indian Colony police chief, a former state trooper with the Nevada Highway Patrol, and a past president of their union—has been locked up since last week.

“They were overmedicating my mother and keeping her in a facility against her will,” Hillygus told The Epoch Times.

“One time she had a black eye and soiled pants. I couldn’t stand by and see her like that without doing something. I’m her son.”

Susan Hillygus has since died and both men have been out on bail for some 2.5 years waiting to resolve the charges in court. However, on Jan. 19 a traffic stop landed Handte in police custody.

“Roger Hillygus would not have had to save his mother’s life if there were a fair and reasonable guardianship or conservatorship process in the United States,” said Dr. Sam Sugar, founder of Americans Against Abusive Probate Guardianship (AAAPG) in Hollywood, Florida.

“It was because this system is so rigid, so unforgiving, and so easily perceived as corrupt that he was forced to be in that position and he is now suffering the consequences. The system does not tolerate any dissent and it goes to extreme lengths to destroy anyone who dares to stand up to it.”

Underlying his recent arrest is Handte’s refusal to wear a GPS monitoring device on his ankle.

“He did not consent to the tracker or want to pay $90 a week for it,” Hillygus said about his co-defendant.

“He never missed checking in, had not been in trouble or committed any crimes, and was out on his own recognizance. There was no need to track him. It’s a violation of his constitutional rights.”

“The judge determines what the ultimate bail is in a case … and, in this case, this bail is not set as a result of the initial charge,” said Chief Investigator Michelle Bays in the Investigations Division of the Washoe County District Attorney’s office.

“It’s a result of [Handte] not following through with the court and the judge’s order and then failing to appear when directed.”

At a status hearing on Feb. 2, Handte was brought into the courtroom in a wheelchair flanked by two officers, slumped to one side and wearing a black face mask.

Judge Barry Breslow requested a motion from Handte’s attorney, Thomas Pitaro, that would allow him to order the jail to address Handte’s apparent decline since being incarcerated.

“If you believe the jail is being deficient and compromising his health, safety or welfare in some way, please file something with some authority that gives me the right to direct them to do something different than what they’re doing now,” Breslow told Pitaro at the remote hearing on Zoom.

Breslow also implied he would be willing to lift Handte’s $100,000 bail requirement if Handte complied with wearing an ankle bracelet and Pitaro submitted a motion requesting it.

“I want Mr. Handte out of jail if he will comply with the court order,” Breslow added.

“I’m sorry he has a medical issue going on and we can talk about that, too, but it didn’t give me any pleasure to revoke his bail. I just want him to comply with the court order and move this case along.”

Pitaro did not immediately respond to requests for comment.

“The court has not yet relieved Mr. Pitaro of his professional obligations to represent Mr. Handte. To the extent necessary, a hearing on Mr. Handte’s request to represent himself will be held at a future date.”

Dr. Sugar, who authored the book “Guardianships and the Elderly: The Perfect Crime,” estimates that there are three million or more elderly and adults with disabilities under court supervision nationwide.

“No one knows how many cases there are and it’s just a guess, no matter who’s making it,” he said.

“Out of all the estimates about how many guardianships there are or might be, the very low range is a … conservative 1.3 or 1.5 million.

“From my perspective that’s an extremely low number and we can only extrapolate from existing data, which suggests there are 3 million or more.”

Britney Spears’ guardianship, known as a conservatorship in California, has raised awareness of the abuses that can allegedly occur as a result of court-appointed guardianships.

For example, the American Civil Liberties Union (ACLU) reports court-appointed guardianships being used for surveillance, to deny visitation with friends and family, to interfere with reproductive rights, to deny medical care, meals, and to confine individuals without consent.

“Prior to the Free Britney movement very few people had even a minimal understanding of how dysfunctional the guardianship conservatorship system is,” Sugar told The Epoch Times.

“Britney’s case was terrible but she’s alive to talk about it because she’s wealthy and famous. The typical ending for someone in this system nationwide is being penniless and dead.”

Correction: a previous version of this article featured a photo that misidentified one of the subjects as Stewart Handte. The Epoch Times regrets the error.