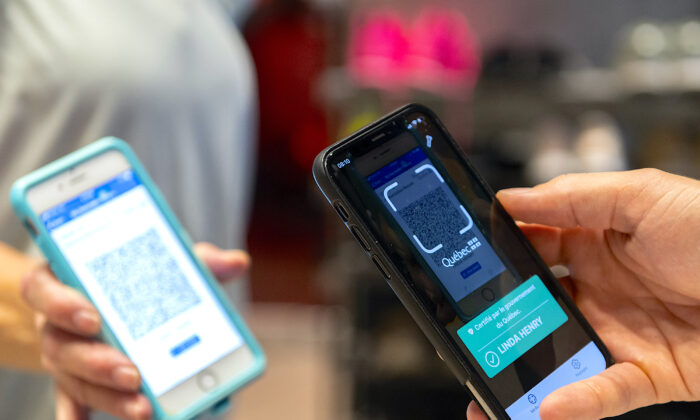 Linda Henry has her COVID-19 QR code scanned by Jonathan Gagne, manager of Orangetheory Fitness in Montreal on Sept. 1, 2021, as the Quebec government’s COVID-19 vaccine passport comes into effect. (The Canadian Press/Graham Hughes)
US Features

How an Attorney and a Holocaust Survivor Stopped Vaccine Passports in Orange County, California

'That is exactly how Hitler started hunting my people': holocaust survivor
By Enrico Trigoso

California and New York were the first areas in the country to take steps toward vaccine passports last year. New York City implemented it, but Orange County didn’t, thanks to the efforts of human rights Attorney Leigh Dundas and holocaust survivor Vera Sharav.

Dundas is leading some of the nation’s most notable efforts to counter the vaccine mandates, which are regarded by many as unconstitutional and encroaching on civil liberties. She played a key role in the prevention of what she considers a Nazi-type “show your papers” framework.

She is the lead organizer of Nationwide Walkout, as well as the principal author and signer of a letter to the FAA that asks them to medically flag all vaccinated pilots, since, according to the letter, the federal agency is violating its own rules concerning flying after taking new medication.

Dundas went to USC law school and after she graduated at age 21, she started litigating for Fortune 500 companies.

Her first strike against the forced vaccination rollout occurred earlier this year when the idea of vaccine passports was being tested in Orange County, California.

Dundas’s grandparents on her mother’s side fled Eastern Europe during the beginning of the last century to get away from communism’s red terror death squads.

Some of her family and friends did not manage to escape, and 20 years later had to face the Romani Holocaust and Hitler.

“In my family, we have a very strong legacy of what communist takeovers look like and what tyrannical overthrows of government look like,” Dundas told The Epoch Times.

She believes that the reason Orange County was targeted is because it is one of the most conservative counties in California.

“They targeted Orange County, a bastion of conservative values, knowing full well that if they could get a county that has John Wayne’s statue in our airport to fall to the notion of digital vaccine passports, they could push it through anywhere,” Dundas said. “So we understood immediately, we needed to hold the line here.”

A meeting was held with the majority conservative Board of Supervisors of Orange County, where Dundas and others who were against the idea got very vocal, likening the passports to those that the Jews had to use to identify themselves during Nazi Germany.

Katrina Foley, the sole supervisor who stood firm in favor of the passport, claimed that most people support it and that the protestors are only a few people who “don’t believe in vaccinating in the first place. They’re also people who in the past year have denied that COVID exists, denied the pandemic, have marched on our United States Capitol, participated in the insurrection,” she told ABC.

Dundas rebutted Foley during the next board meeting, arguing that 40 percent of old people don’t have smartphones, which were an intrinsic part of the vaccine passport.

“For being liberal-leaning folk, I frankly don’t get it,” Dundas said, “when you look at the demographics, it’s largely Caucasian, younger people who have smartphones, and the populations that have the fewest smartphones, or the least access to smartphones, are immigrant populations, minority populations, and older people.

“As liberals whose platform is predicated on protecting the little guy and protecting the vulnerable classes … you’re discriminating the hardest against those classes right now with your mandatory vaccine digital passport.”

However, none of these arguments swayed the decision-makers at all.

Dundas has represented entities that had boards in the past and believes she has a good idea of what it takes them to consider a different path. She was convinced at this point that there was some other hidden, perhaps monetary bias.

“I don’t know what it is, but all I know is when they’re absolutely unwilling to reconsider a bad decision—there’s something nefarious going on, and it’s not visible to those whom they serve,” Dundas said.

Several people from the county then started investigating and found out that the county had made a secret contract with a vaccine PR firm before the firm was hired publicly, which allegedly included $500,000 in vaccine outreach.

‘The Beginning of the End’

Dundas further noted: “This was the beginning of the end, it was the beginning of the big tech superstate being able to identify us everywhere we went. You can’t tell me that even the Democrats in our county who are pro-vaccine want to be having to flash a vaccine passport that leaves a digital trail of breadcrumbs every time they leave their house.

“Nobody, regardless of whether they’re Republican or Democrat or have completely bowed out of the political structure—nobody wants to be tracked like that.

“Why are we resurrecting the sins of old? This is Big Brother meets Rosa Parks.” At least 19 federal government agencies have implemented or are considering putting in place a system to track religious exemption requests for mandated vaccines, according to a review of Federal Register notices by The Epoch Times.

Dundas’s opposers scoffed at the comparison of the vaccine passport to the Warsaw Ghetto, and at that point, with the board proceeding to ignore her, she realized that she was not the best mouthpiece for this argument. She then got in touch with holocaust survivor Vera Sharav.

When Sharav was updated about the vaccine passport agenda, she told Dundas: “Whoa, that is a Nazi plan. That is exactly how Hitler started hunting my people.”

Sharav then recorded herself expressing concern over the vaccine passport, and gave her statements unconditionally to Dundas to produce this ad:

“I’m a child survivor of the holocaust. One of the discriminatory actions against Jews was special passports to identify, discriminate, and persecute us,” Sharav says in the ad, “I shudder to think that places like Orange County, California, are considering special digital vaccine passports. If enacted, those passports will create a two-tier society and deny citizens equal access.”

Dundas and her husband figured out the price for the ad to be aired every hour during prime time on CNN, MSNBC, and Fox from about 5 p.m. to midnight for a week straight, which was about a quarter-million dollars.

They then worked hard to raise that money and paid for the spots. But the night before they were going on air the networks apparently changed their minds.

“They decided to try to back out, but our people held their feet to the fire, and [we] got the ads on the air,” Dundas said, “we paid a pretty penny to keep those ads set to go.

“And for a week straight when our Board of Supervisors came home at the end of the day to put their foot feet up and turn their TVs on, they got to see a Holocaust survivor, explaining in her own words, how their Orange County digital vaccine passport program was the exact same thing that Nazi Germany had done to hunt her people down during World War Two, and that it was the beginning of the Warsaw Ghetto essentially.

“And for the last three days of that ad, I overwrote on the bottom of the ad: If you’re within driving distance to the board of supervisor meeting, please show up next Tuesday morning. So in the final board meeting, we had over 2,000 people in attendance.”

More than 700 people registered to speak in response to the passport agenda item and even more signed up for general public comment.

Four out of five of the board members subsequently voted to pause the digital record/QR code vaccine passport, Foley being the only one who stood in favor of it.

“We are still a constitutional republic and our government is of the people by the people for the people. And we have a right, still to this day, although it’s been infringed upon—unlike Australia—to freely travel, to freely speak, to freely gather, and to make our voices heard.

“And so long as we continue to do that, the tyrannical plans that are being unfolded in fits and starts across this country will not succeed.

“People blame Hitler all the time for the rise of fascism and the Nazi Third Reich. The Third Reich was not the result of Nazi Germany, and the reason that Jewish people were baked alive in ovens was never the result of Hitler. Hitler was a single person with a bad plan and he was no angel, don’t get me wrong. But at the end of the day, if the Germans had just stood up and said, ‘We are not baking our neighbors in ovens, go to hell Hitler, we’re not doing this.’ It never ever would have taken root. I think the reason we are facing a second holocaust in our lifetime right now is because we did not fully learn the lesson the first time around.”

A recent poll came out showing large support among Democrats for the detention of unvaccinated people.