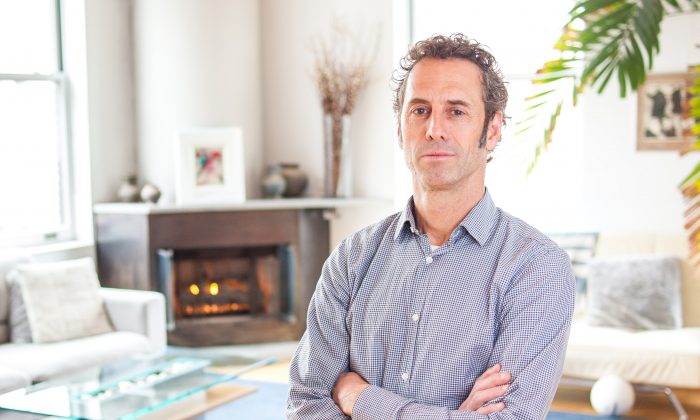 How an Architect Beautified His Industrial Tribeca Loft, Furniture and All

Eisner’s design aesthetic is exemplified in the sweeping, curved, polished plaster wall that dramatizes the open-plan dining area. Tribeca’s lofts are famous for their celebrity residents, such as Eisner’s former neighbor Jon Stewart, and Eisner, the architect, developer, and furniture designer, fits right in to this environment.

Born in Manhattan and raised on the Upper West Side, Eisner learned at a young age the importance of detail. His mother Carole is an artist, and his father Richard is an accountant.

“We live mainly in rectilinear spaces, from a furniture standpoint,” Eisner said, “So I always want something in my spaces that challenges that logic and free things up. So the curve is about movement,” he explained.

Soft on the eye, with a sculpture-like feel, the curved wall tapers back as it meets the kitchen to optimize freedom of movement at the kitchen’s two entrance points.

A bedroom that shares the wall is more spacious where the wall bows out and then tapers in slightly at the end closest to the kitchen where space is less useful.

The bedroom is Eisner’s 13-year-old daughter’s, Erin. She has a custom-made bed and desk, and a luxurious, hotel-style en-suite with walnut cabinetry, and tawny-colored tiled walls.

Eisner intentionally positioned the kitchen as the center of the home. The eat-in bar, made with walnut wood and marble countertops is framed by Eisner’s custom-designed plywood and white pleather Hudson Chair barstools.

The kitchen walls are a pleasant green, bordered by walnut and green-tinted-glass cabinetry, stainless steel appliances, and white marble countertops. The smooth finished concrete floor in the kitchen compliments the adjoining hickory hardwood flooring in the open-plan dining and living areas.

The original 11-foot-3-inch ceilings are maintained throughout the loft, except in the kitchen and at the borders of rooms where the HVAC is housed.

During the loft conversion back in 2004, Eisner removed a freight elevator from the master bedroom area, and added a gas fireplace and two extra windows in the living area. The Eisners also have a roof deck with a massive gas BBQ, and an outdoor shower, which “is more of a novelty, but it’s fun.”

Eisner designed their home to maximize the public living space in the dining, kitchen, and living rooms, while also balancing privacy and having more functional rooms.

“A lot of loft renovations I see today look like they could be an Upper East Side apartment project, and you don’t remember anything about what it was historically, or have a sense of all the great spatial qualities that get chopped up,” Eisner said.

As a result their home has almost no hallways. The three bedrooms open directly onto the dining area. “There’s a downside to that too, it’s a little less privacy,” Eisner said.

Eisner added short vestibules or mini-hallways inside the master bedroom and his youngest daughter’s bedroom to enhance privacy.

The master suite includes a spacious dressing room for Eisner’s wife Vicki Porges. It is located between the master bedroom and their en-suite.

Porges is a pediatrician. In 2006, she founded Downtown Pediatrics in Tribeca just three blocks from their home.

The master en-suite distinguishes itself from the two other bathrooms in the home with its custom poured concrete his-and-her hand basins, which Eisner designed. Their bathroom has beautifully tiled walls, a row of modern art from his sister’s gallery, and a deep spa bathtub with glass doors.

The home’s third bathroom, at the base of the stairs to the Eisners’ roof deck, is the “iguana bathroom.” This bathroom has a poured concrete floor, and the area surrounding the hand basin has an iguana mosaic.

The mosaic memorializes Eisner’s pet iguana Paco who died at the age of 24 a couple of years ago. “I found out the sex after I named her,” he said.

Eisner was among a group of people who bought the nine-story industrial building on Hudson Street in 2001. After setting up the LLC, the group divided the 24 loft spaces and converted the building to condominiums in 2004.

“I wanted to find a building that had a corner condition because it allows you a lot more flexibility with the architectural layout and plan, versus like a typical loft: slotted space which is really bedrooms in the back, living space in the front, and something dark in the middle,” Eisner said.

Eisner converted two apartments in the building. The one he lives in and the one directly below.

“We literally moved in—I warn my clients not to do this—two weeks before my wife gave birth [to Jesse, the younger daughter],” he said, adding that otherwise they would have had two adults, two children, and an iguana living in a one-bedroom apartment.