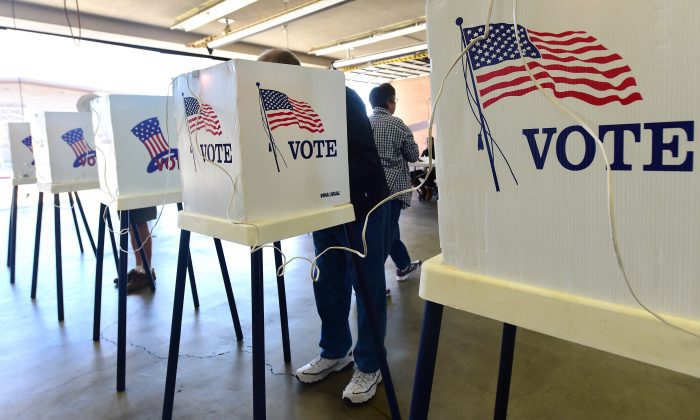 Voters cast their ballots at a polling station in Alhambra, California, on Nov. 4, 2014. (Frederic J. Brown/AFP/Getty Images)
US

In Dothan, Ala., the verdict is in: it was election fraud.

Last week, a jury convicted 66-year-old Olivia Reynolds on 24 felony counts of absentee ballot fraud in the contested 2013 election for the Dothan City Commission. Reynolds worked on the re-election campaign for District 2 incumbent Amos Newsome. During the tainted 2013 election, she forged and altered enough absentee ballots to guarantee victory for her boss and boyfriend.

The verdict will only come as a shock to those who still insist that voter fraud simply doesn’t exist in the United States.

In 2013, Newsome narrowly won reelection to his office, besting challenger Lamesa Danzey by a scant 14 votes.

However, after Danzey identified at least 37 absentee ballots that she claimed were illegally cast, the Houston County Sheriff began investigating irregularities in the District 2 race. Danzey, it turned out, had won the in-person vote by a hundred votes, 343-243. But Newsome had carried a whopping 96 percent of the absentee vote, winning 119 of the 124 ballots cast by mail. That was enough to tip the scales in the incumbent’s favor—and to raise the eyebrows of investigators given how much the margin of absentee ballots cast for Newsome differed from the margin of votes cast for him on Election Day.

Interestingly, this was not the first time Newsome had lost the in-person vote but carried the absentee vote by wide margins. In 2011, he lost at the polls by 45 votes, yet won 131 absentee ballots—all but 9 cast that year.

The Sheriff’s investigation culminated in the arrest of Reynolds and three others. Three of the four have now been convicted in what appears to have been an organized conspiracy to deny the citizens of Dothan their right to free and fair elections.

Investigators found that the defendants had fraudulently applied for and submitted absentee ballots for registered voters.

During Reynolds’ trial, it was revealed that she went even further.

Witnesses testified that she ordered them to vote for Newsome. Four witnesses confirmed they had done so even though they intended to vote against him. In some cases, Reynolds illegally filled out part or all of voters’ ballots for them. In the course of the trial, some voters discovered their ballots had evidently been cast for Newsome, even though they had never voted for him.

Alabama law requires that absentee votes must be observed by two witnesses, to safeguard against fraud. But the case reveals how easy it is to circumvent that requirement—and just how insecure absentee ballots are.

In fact, absentee ballot fraud is one of the most common forms of election fraud.

Reynolds’ attorney, Chris Capps, responded to the charges against his client with allegations of racism on the part of prosecutors and law enforcement. The city of Dothan, Capps said, was just out to get Newsome and undermine the ability of a minority district to vote absentee.

Of course, Capps wanted jurors to overlook the fact that the primary victims of Reynolds’ fraud were the minority residents of District 2 whom she effectively disenfranchised.

Such false claims are sadly common in the debate over election fraud. Opponents characterize efforts to ensure the integrity of the electoral process, such as requiring photo ID for both in-person and absentee voting, as little more than an attempt to suppress minority votes.

In reality, nothing of the kind is true. Often these claims, such as in this case, are merely an attempt to distract the public from the criminal activity of the defendants and to deter and scare prosecutors from proceeding. Analysis has revealed that minority turnout has actually increased in states with photo ID requirements.

At trial, Assistant District Attorney Banks Smith reminded jurors and the public that voter fraud cases are not about political agendas or racially-motivated attacks. “This case is about the sanctity of the ballot.”

And jurors, it seems, paid attention. The evidence was so overwhelming it took less than an hour for the jury to return a guilty verdict. Reynolds is the third person convicted of absentee ballot fraud in connection with the Newsome campaign. Though Commissioner Newsome himself has not been directly fingered for criminal conduct, the legitimacy of his election has clearly been called into question.

Olivia Reynolds and two other defendants, Janice Hart, and Lesa Coleman, have been held accountable for their illegal efforts to deprive their community of a fair political process. The aftermath, however, reveals how difficult it can be to wipe away the stain of election fraud after it has occurred.

Several Dothan City commissioners are pressuring Newsome to resign in light of the clearly illegal conduct tied to his campaign. Unfortunately, if Newsome refuses, there is little the city commission can do. Residents of District 2 can force a recall vote if 3 percent of voters sign a petition. Yet, even if that is successful, holding another election will cost taxpayers money they should not have to spend.

Even a new election would not erase the two years that District 2 has been represented by a commissioner they likely did not elect.

Those on the Left like to downplay the significance of election fraud, even going so far as to say that it somehow does not exist or does not affect elections. They should pay a visit to Dothan, and tell that to Lamesa Danzey.

Faith in the democratic process begins with the security of the ballot box. Citizens have a right to expect that safeguards will be put in place to protect their votes from being stolen or negated by fraudsters and criminals. Without those safeguards, trust in our public institutions is undermined.

What happened in Dothan is a recurring problem in Alabama; Greene County had a similar experience with large-scale absentee ballot fraud in the 1990s.

As former Alabama Congressman Artur Davis said in 2011, he had seen voter fraud and “the wholesale manufacture of ballots, at the polls and absentee,” in Alabama. “If you doubt it exists, I don’t” said Davis.

The Heritage Foundation has compiled a sampling of nearly 300 instances of voter fraud and has released a report detailing common sense steps communities, states, and the nation can take to prevent it. In many cases, elections are decided by a mere handful of votes—and the outcomes of those elections can be, and have been, altered by a small cabal of determined crooks.

Dothan is just the most recent example of this. Unless we take electoral integrity seriously, it won’t be the last.