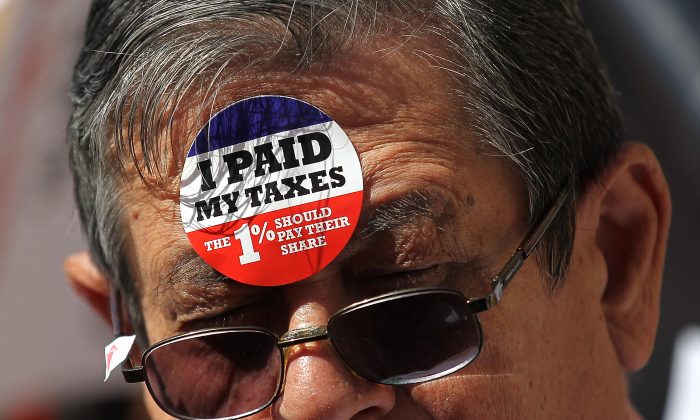 A protester wears stickers on his face during a tax day demonstration in front of the James A. Farley Post Office in New York on April 17, 2012. (Justin Sullivan/Getty Images)
Canadian Content

For some present-day Canadians, it is often assumed that our identity rests upon a higher tax burden vis-à-vis the United States. Actually, the historical record is that Canada’s identity was originally found in an attachment to limited government, moderate taxes, and more robust desire for British liberty in contrast to the Americans.

In the later 19th century, the idea that citizens existed as vassals for the state, to be emptied of money at the whim of a government that wanted revenue for higher purposes, was largely absent from the thinking among the Fathers of Confederation.

Theirs was a classic liberal world, in which the role of the state was to protect the citizen from government and to provide basic services, albeit defined rather narrowly. For instance, a 1940 Royal Commission described Canada at Confederation as a country that “followed the prescription of Adam Smith” and that “Government was thought to have met its purpose when it provided for adequate defense, the enforcement of the general law through the equal administration of justice and maintenance of a few essential public works.” In addition, looking back, The Royal Commission noted that British North American governments “took seriously their responsibility for maintaining internal order but they carried them out with frugal care.”

At Canada’s founding and for decades afterward, Canada’s leaders argued moderate taxation and limited government were necessary for the country’s well being, even if at times, as during the Great Depression and the second world war, the role, size, and power of the state expanded.

For Canada’s earliest politicians and finance ministers, attracting immigrants and investment to Canada through the promotion of a low-tax regime vis-à-vis the American rebel nation was the stated goal. The Dominion’s leading politicians trumpeted and contrasted Canada’s lower taxes and less intrusive government with the tax-happy Americans.

As tax historian Irwin Gillespie has written, Confederation-era politicians assumed a policy of taxes lower than the United States as crucial to filling the country with immigrants and with investment:

Dominion governments feared losing potential immigrants, as well as those immigrants who were newly settled in Canada, to the United States. Thus the principle applied to numerous tax rate changes was that they should not exceed the tax levels in the United States. Competition for those mobile human resources, not to mention the capital with which these immigrants (be they farmers or businessmen) arrived, was fierce. Consequently, all Dominion governments were determined to keep tax rates low.

So what changed? A combination of events and American policy: The money necessary to finance the first world war is the most obvious example of how an event propelled the introduction of a previously forbidden levy (income tax). But while events provided the justification, new American policy often provided ready examples and legislation.

When Canadian politicians imposed additional and higher taxes in the late 19th and early 20th centuries, they invariably did so only after the Americans taxed first. As well, there were direct legislative influences on Canadian tax laws both federally and provincially.

For example, the Americans brought in a federal income tax briefly in 1862, during the Civil War, abandoned it in 1872, and then, after a skirmish in the country’s Supreme Court in the 1890s, reintroduced income tax again in 1913.

Also, the first provincial corporate tax, in Quebec in 1884, came from an American precedent. The taxation of personal property, common in many Canadian municipalities at Confederation, was also American in origin, not British, as that country abandoned such taxes centuries before. When Ontario and the other provinces introduced estate taxes, the influence of American legislation was clear. As tax historian Harvey Perry writes:

The Canadian provincial legislation was inspired by and modeled after legislation of the American states. Clear testimony to this fact is given in the work of R.A. Bayly (1902). Bayly said this about the original Ontario Succession Duty Act: “That the New York and Pennsylvania Acts in force at the time were copied in principle and detail must be at once apparent to anyone who compares them with the Ontario Act of 1892. … The Ontario Act of 1892 was purely American in its origin.”

The pattern established in the last 20 years of the 19th century where Canadian governments copied the taxing habits and the legislation of American governments continued unabated into the new century. Canada’s federal income tax, introduced in 1917, 55 years after the first American federal income tax, also bore the mark of U.S. legislative influence. The Dominion Income War Tax Act of 1917 “bore an unmistakable resemblance to the similar 1913 American legislation” wrote one historian.

The combination of events and American influence is also obvious in Canada’s first gasoline tax, levied by Alberta in 1922 at a rate of two cents per gallon. But Americans already taxed fuel in Oregon, Colorado, and North Dakota by 1919, in Kentucky in 1920, and in 15 other American states in 1921. In all, 19 states placed a tax on gasoline before Alberta.

The American precedent was also there for other taxes. When Canadian provinces began to introduce sales taxes over the course of several decades, beginning with Alberta in 1936 under an act called the Ultimate Purchasers Act (though the province yanked the tax just one year later), American states had already ventured into that taxing territory.

In short, think of almost any modern Canadian tax: federal income, gasoline, property, and corporate. Almost all have American origins.

Excerpted from “Tax Me I’m Canadian! A Taxpayer’s’ Guide to your Money and How Politicians Spend It.” Mark Milke. Thomas & Black 2014. Reprinted with permission. Previously published in www.troymedia.com.