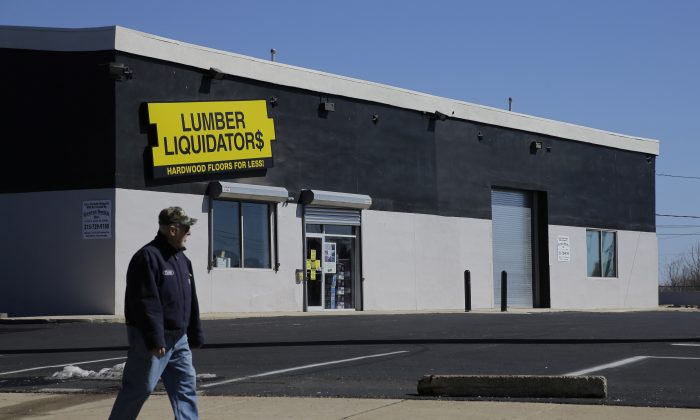 Lumber Liquidators said Thursday that it is suspending sales of Chinese laminated flooring following a safety investigation looking into the use of the carcinogen formaldehyde in the laminated flooring. A week earlier, the hardwood flooring company revealed in a regulatory filing that the Justice Department is seeking criminal charges against it for illegal harvesting.

The company, the largest specialty retailer in its industry in North America, continues to review the certification and labeling practices of the Chinese suppliers and has hired a former FBI director to aid the investigation. Lumber Liquidators has been accused of selling illegally harvested wood to cut costs.

Instead of sourcing wood from China, Lumber Liquidators says it will use wood from North America and Europe.

News of Lumber Liquidators’ unethical practices first surfaced in a 2013 report from the Environmental Investigation Agency (EIA), which found that wood from Russia was being illegally harvested by criminal networks and imported to Lumber Liquidators’ Chinese supplier. The Chinese manufacturer had openly described its illegal methods that are a violation of the 2008 Lacey Act.

The report led U.S. officials from Homeland Security and the U.S. Fish and Wildlife Service to raid Lumber Liquidators’ headquarters in Virginia. But it did not affect the company’s earnings at the time, and its stock was in fact reaching an all-time high. Shares reached $115.36 by November.

Hedge fund manager Whitney Tilson, of Kase Capital, helped blow the whistle on Lumber Liquidators after noticing the company’s rapid growth over the past decade and high profit margins, despite a competitive environment that included Home Depot and Lowe’s.

Tilson brought public attention to the EIA report at a hedge fund conference in November 2013, and disclosed his short position.

Tilson told an audience of Baruch College students last month that he had figured, “If they’re cheating here, they must be cheating elsewhere.”

Months later, a source Tilson would not name, who was deeply familiar with the Chinese hardwood flooring industry, pointed him to Lumber Liquidators’ use of the carcinogen formaldehyde in laminated flooring. Overexposure to formaldehyde has been known to cause skin irritation and rashes, and can also induce asthma.

Tilson paid $5,000 to test three samples of Lumber Liquidators’ laminated wood and then went on CBS’s “60 Minutes” to reveal his findings. He said at Baruch, “I discovered an American company is poisoning its customers.”

The samples were two times, five times, and seven times higher than the California Air Resources Board (CARB) legal level, proving that Lumber Liquidators had falsely labeled its products CARB-compliant.

Lumber Liquidators announced Thursday initial results from an indoor air-quality test indicating that over 97 percent of customers’ homes were within World Health Organization safety guidelines. It has been offering its customers free home air test kits since March.

Lumber Liquidators shares hit a high of $29.20 a share Thursday and closed at $27.07, maintaining similar numbers compared to the day before.