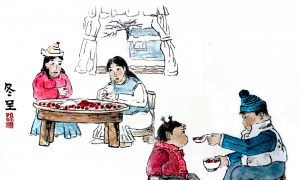 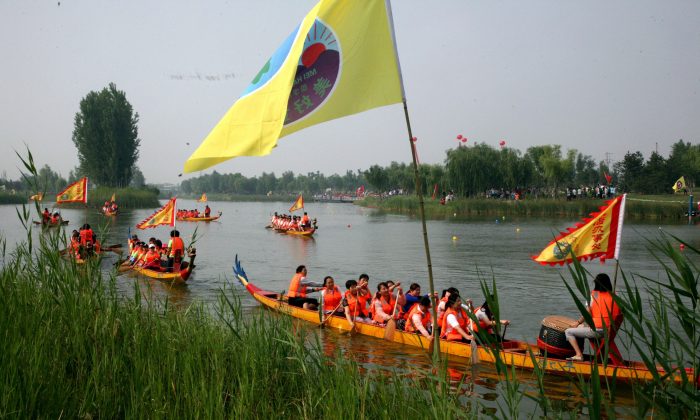 This picture taken on June 20, 2015 shows dragon boats setting off on the annual race along a river in Binzhou, northeast China's Shandong province. Dragon boat racing dates back over 2,000 years and has now developed into a serious sport on the calendar of many countries around the world. (STR/AFP/Getty Images)
China

How a Poetic Martyr Inspired the Dragon Boat Festival

The Duan Wu, or Dragon Boat festival, is one of the oldest and most popular traditional Chinese festivals. Celebrated on the fifth day of the fifth month of the Chinese lunar calendar, this year it falls on June 20.

The festival dates back over 2,000 years to the Warring State Period (475–221 B.C.). The tradition is derived from the tragic story of Qu Yuan, a poet and statesman who lived in the fourth and third centuries before Christ.

Qu Yuan was a court minister for King Huai of the state of Chu. Seeing the danger his state faced from the neighbor empire of Qin, Qu begged his king to form an alliance with the other five Chinese states to keep the threat at bay.

Though a patriotic and loyal official, Qu Yuan’s upright character and wisdom made others envious. Jealous ministers defamed him and pressured the king of Chu to banish Qu to what is now Hunan Province in central-southern China.

Later, when the Chu capital was taken by the Qin invaders, Qu Yuan was so grief-stricken that he threw himself into Dongting Lake. His legacy of patriotism won the respect of generations to come, and the Dragon Boat Festival was created to commemorate the life and death of this noble man.

Despite his political misfortune, Qu Yuan was highly respected among the local Chu people, who admired his noble ideals and poetry. His epic, 373-verse poem titled “Li Sao” or “Encounters with Sorrow” featured in the beginning of “Chu Ci”—the “Verses from Chu.”

Other famous works by or attributed to Qu Yuan are “Jiu Ge” or the “Nine Songs,” and “Tian Wen” or “Questions to Heaven.”

“Tian Wen” is a collection of 172 questions to heaven about Chinese mythology and religious beliefs, questions to which the poet provides no answers. “Jiu Ge,” despite its name, includes 11 odes representing shamanistic practices of the Yangtze River Valley, where Chu State was located.

In 278 B.C., on the fifth day of the fifth month, Qu Yuan wrote his last poem, “Huai Sha” (“Embracing the Sand”) and then took his own life. With a rock tied to his body, he waded into the Miluo River, less than a mile away from the river’s entry into Dongting Lake, and drowned.

Traditional Chinese culture puts much emphasis on maintaining the integrity of the body after death. After news of Qu Yuan’s death spread, the local people of Chu, who admired Qu Yuan greatly, paddled their boats out and raced to save his body. They raced from Miluo River all the way to Dongting Lake.

According to legend, villagers living near Dongting Lake wished to prevent fish from eating Qu Yuan’s body by disturbing the waters with their passage. This story is said to be the origin of the yearly dragon boat race, as well as the traditional delicacy called “zongzi,” a food made of sticky rice and eggs wrapped up in large leaves. It is said that villagers used the zongzi as bait to distract the fish from Qu Yuan’s body.

Very soon, the dragon boat race became an annual tradition in the states of Chu, Wu, and Yue. Over the centuries, the festival became popular throughout China, and as Chinese people migrated to other countries, the dragon boating event has become a worldwide phenomenon.