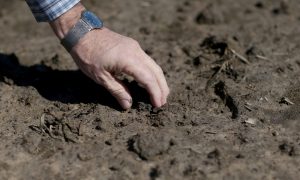 How a Plant Knows Friend From Foe

Soil is crowded with bacteria and fungi. Tens of thousands of different species can inhabit the same space. So how does a plant that grows amid it all know the difference between good bacteria and bad ones?

The defense hormone salicylic acid helps select which bacteria live both inside and on the surface of a plant’s roots, keeping some families out and actively recruiting others.

“What we really wanted to understand was how the plant establishes a mutualistic relationship with microbes that it likes, compared to microbes that it doesn’t like,” said Jeffery Dangl, professor of biology at University of North Carolina at Chapel Hill and a HHMI-Gordon and Betty Moore Foundation investigator who led the research.

With a better understanding of how plants assemble and maintain complex microbial communities, it might be possible to manipulate those communities to increase plant productivity, he said.

Dangl and colleagues had previously shown that hundreds of species of bacteria live inside and on the surface of the roots of the model plant Arabidopsis thaliana when it grows in wild soil.

In the new study, published in Science Express, they investigated how those microbial communities changed when plants lack the defense hormones that mediate the immune response to pathogens.

There are three such hormones: salicylic acid, jasmonic acid, and ethylene. Production of defense hormones ramps up when the plant’s immune system detects a pathogen, but they are always present at some level. Because the three hormone systems can partially compensate for one another when one system malfunctions, it has been difficult to tease out the precise function of each one.

To catalog the bacteria inside and on the surface of each plant’s roots, Dangl’s team collaborated with scientists at the Joint Genome Institute to determine the sequence of different versions of the 16S ribosomal RNA gene that were present in their samples. This gene is present in all bacteria, and variations in its sequence allow scientists to distinguish between different bacterial types.

Graduate student Sur Herrera-Paredes, an HHMI international student research fellow, led the computational analysis of the data, which revealed significant alterations in bacterial communities among plants that were missing salicylic acid, including those that were also missing either jasmonic acid or ethylene.

The scientists were surprised to note shifts in the relative abundance of entire families of bacteria in these plants. The findings indicate that in normal plants, the natural level of salicylic acid shapes the microbial community at the root both by keeping certain families out and by letting others in.

“This level of salicylic acid gates potential bad guys out, but it is also required as positive signal to attract bacteria. It’s not just defense,” Dangl said.

That raises new questions. How does salicylic acid recruit desirable bacterial families? Is it the defense function of the hormone that keeps other families out?

To set the stage for exploring those relationships, graduate student Derek Lundberg and Sur Herrera-Paredes optimized a synthetic soil with a selected bacterial community. They introduced 38 strains of bacteria that they had isolated from roots grown in the wild soil into a sterile clay, and the team showed that when it grew plants in that synthetic soil, the presence of salicylic acid determined which microbes colonized the roots.

Now, researchers are poised to use the tools of genetics and molecular biology to find out exactly how plants establish their complex microbial communities, Dangl said.

“Our survey in the wild soil is essentially an ecology experiment. Now we can build complex communities that recapitulate what we found in those experiments, but are entirely manipulable.”

This article was originally published by the University of North Carolina–Chapel Hill. Republished via Futurity.org under Creative Commons License 4.0.