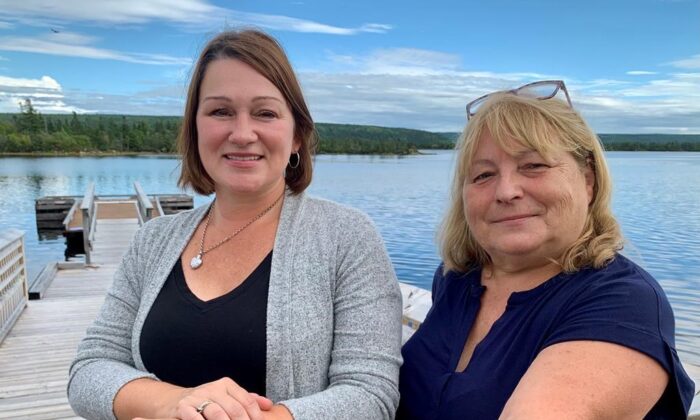 Barbara Pritchett, left, and Carol Anne Loveless, right, stand on a deck in front of the Gambo River in Gambo, N.L., on Sept. 3, 2021. They co-wrote a play documenting the massive efforts undertaken by the people of Gambo to look after hundreds of passengers whose planes were rerouted to the nearby town of Gander on Sept. 11, 2001. (The Canadian Press/Sarah Smellie)
Canada

How a Plane Diverted to Newfoundland on Sept. 11 Forged a 20 Year Friendship

GAMBO, N.L.—Every Friday evening, Steve Badcock pours himself a drink and flips open his laptop to video chat with a close friend he met because of a terrorist attack in New York City and its ripple effect across the skies.

It often takes a few tries to connect—internet can be sketchy in the rural Newfoundland community of Gambo, where Badcock lives and where his friend Steven O’Hehir arrived on a school bus after his flight to Cincinnati was diverted to central Newfoundland on Sept. 11, 2001.

This past Friday, after a few more failed attempts than usual, O’Hehir suddenly filled the screen, beaming in from his home in Winchester, England, laughing and making wisecracks while proudly displaying his Newfoundland T-shirt.

The day 20 years ago that began with two hijacked planes flying into the World Trade Center in Manhattan caused “so much misery and so much sadness for so many people,” O’Hehir said. “It changed the world.”

But for O’Hehir, there’s something else. “To me, it means 20 years of friendship that just came out of the blue, that one never expected,” he said. “I found a family, I found a home, I found a place that absolutely touches you in the heart. It was just an amazing experience. It changed my life.”

O’Hehir was among more than 6,500 passengers on 38 planes diverted to the airport in Gander, N.L., that day when air traffic was shut down.Badcock is a senior architectural technologist with the Canadian Forces base at the Gander airport, and he watched in astonishment through his office window as the planes landed.

“They just kept coming out of the sky, it was crazy,” he said. “To see so much international traffic … you knew it was something quite serious.”

The people of Gander came together in an effort—now immortalized in the 2017 Broadway musical “Come From Away”—to feed, clothe and house the “plane people,” as they were called, for the several days they were stranded. But with a population of about 11,250, there were only so many places available in Gander and the town quickly ran out of room. About 1,000 plane people, O’Hehir included, were bused to Gambo, a small town about 40 minutes away from Gander. Others went to neighbouring communities such as Norris Arm and Appleton.

Barbara Pritchett lives in Gambo, but she was in Manhattan when the planes hit theTwin Towers.

“I called my mother. Finally I got through, and I said, ’We’re fine, we’re all safe, we’re in the hotel.’ And I said, ’But mom, there’s no one in the streets, you just can’t believe it, there’s no one here,’” Pritchett said. “And she said, ’No, because they’re all in Gambo!’ ”

Pritchett said her mother was watching all kinds of people she’d never seen before walk by her window—an unheard of occurrence in the town of fewer than 2,000 people.

Most of Gambo’s residents went immediately to work, setting up beds wherever they could fit and cooking huge pots of soups and stews to feed everyone. “There’s no hotels here,” Pritchett said. “They stayed at the Lions Club centre, they stayed in church halls, they stayed in the school gymnasium, they stayed in people’s houses … the shock they must have felt because they had no outside information. It took a long time to have telephones hooked up, it took a while to get televisions running.”

Once people were able to talk to their families, their fears began to ease, Pritchett said. “There were people skinny dipping here in the river,” she said. “I think everyone relaxed and said, ’Let’s just enjoy it.’ ”

Two years ago, Pritchett co-wrote a dinner theatre production, called “Just Imagine,” about Gambo’s experience taking in all these displaced people. Carol Anne Loveless, who welcomed people into her Gander hair salon during that time, co-wrote the show and directs it. The wait list for tickets to see the production in Gambo is weeks long.

“When the ’Come From Away’ musical came out, everyone realized that it was a spectacular thing that we did,” Pritchett said. “We just really didn’t kind of think that it was that spectacular at the time.”

Loveless agreed: “It was something that we would do anyway.” And they’d do it again without question, both said.

Badcock, too, is nonchalant about his community’s massive efforts to care for hundreds of strangers. After he saw what had happened in New York City, he asked for a few days off so he could volunteer at the church in Gambo where about 120 people, including O’Hehir, were staying. People were afraid and confused, he figured, and the more locals there to ease their worries, the better.

Badcock’s father was also helping out and happened to notice the book O’Hehir was reading. One chat led to another and suddenly O’Hehir and Steven Badcock were discussing the history of the First World War and O’Hehir’s recent trip to Beaumont Hamel, in France. “He just happened to be on the same cemetery that my great uncle was buried in,” Badcock said.

They’ve been close friends ever since. O’Hehir returned to Gambo in 2009 and they put 3,000 kilometres on Badcock’s truck touring around the province. Since then, they’ve gone on regular trips together with their wives, Badcock said. Their next destination is Greece, as long as the COVID-19 pandemic allows it.

“Since 9/11, we found that when we’re in an airport, the faceless masses you see, we kind of look at them differently,” Badcock said. “We wonder if there’s a connection there, because we obviously made one with people we never expected to meet.”