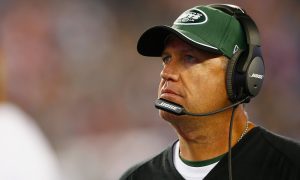 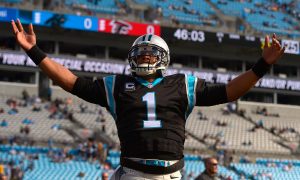 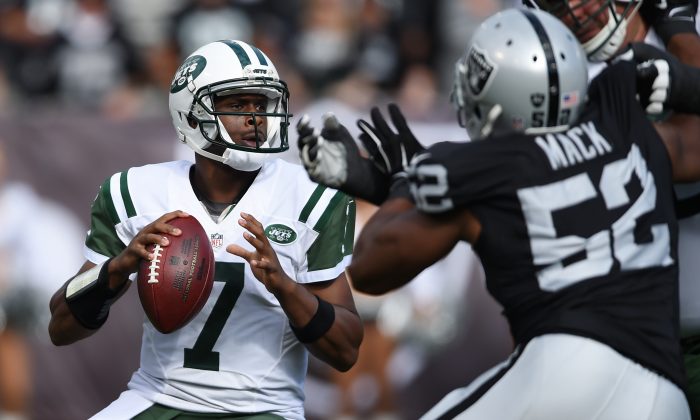 Geno Smith (L) came on in relief of an injured Ryan Fitzpatrick during the Jets 34–20 loss to the Raiders on Nov. 1 that could cost New York a playoff spot. (Thearon W. Henderson/Getty Images)
NFL

The 8–5 Jets, fresh off an impressive 30–8 victory over the punchless Titans, have now won three straight games—the longest winning streak this franchise has seen in four years.

It’s been even longer, five years, since Gang Green advanced to the postseason. And if the regular season ended today, the Jets—in a three-way tie with the Steelers and Chiefs for the two wild-card spots—would be in.

Yet if the Jets, Steelers, and Chiefs all win out, it would be New York that’d be left without a chair when the music stops.

Confused? Welcome to the NFL’s complicated tiebreaker system. A set of rules that requires a Ph.D. in decoding ridiculousness.

Here’s how it plays out.

Todd Bowles’s 8–5 team is 6–4 in the AFC (this comes into play later) and has three games remaining: at Dallas, New England, and at Buffalo. If the Jets take care of business and win out, they’d have an 11–5 record, a six-game winning streak, an 8–4 conference record, an ecstatic fan base, but no guarantee of making the postseason.

Why? Because if both the Chiefs and Steelers also win out, we’d go to the NFL’s multiteam wild-card tiebreaker.

The 13 Best Players on the 13–0 Carolina Panthers

In that scenario, the Chiefs—who have three more AFC games left—would win the first relevant tiebreaker application with a 10–2 conference record and would be playoff-bound. The Jets and Steelers—currently 5–4 in the AFC—then would tie with an 8–4 conference mark, and they would have to resort to the two-team wild-card tiebreaker: record versus common opponents. Pittsburgh would win that, though, because the Jets lost to Oakland (Ryan Fitzpatrick was injured) on Nov. 1—a team the Steelers beat the following week.

Now there is a scenario where the Jets get in at 11–5—even if the Chiefs and Steelers have the same record.

Should 10–3 Denver fall to both the Steelers and Bengals in the next two weeks before recovering to beat the Chargers in Week 17 to finish 11–5, the Chiefs would then win the division tiebreaker based on their better record in the AFC West and the Broncos would lose the three-way tiebreaker to the Jets and Steelers based on their 7–5 conference record.

Yet that doesn’t necessarily mean that the Jets lose any tiebreaker to the Steelers and Chiefs.

Let’s say the three teams each sweep their remaining home games but lose all of their remaining road games. The Chiefs—who have only one remaining away contest—would finish 10–6, while the Jets and Steelers would be 9–7, but this time the Jets would get in over Pittsburgh due to a better conference record: 7–5 versus 6–6.

Of course, this is all solved if the Jets had only beat the Raiders a month and a half ago. You’d only need a master’s degree to figure out that scenario.