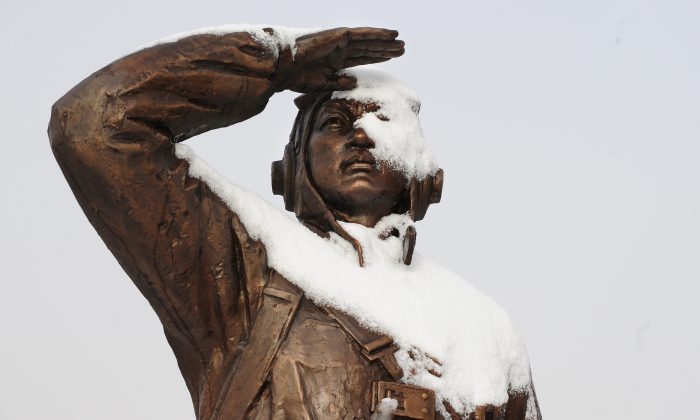 A monument dedicated to a Chinese war veteran looking towards North Korea the banks of the Yalu River in Dandong is patially covered in snow on November 27, 2010 in northeast China's Liaoning province, across from North Korean border town of Siniuju which is connected by the Sino-Korean Friendship Bridge after a night of snowfall. The United States has sought to reassure China over joint US-South Korean military exercises, with the Pentagon insisting the war games were "not directed" at Beijing with the four-day exercises starting November 28 coming in the wake of North Korea's artillery bombardment of a South Korean island. AFP PHOTO / Frederic J. BROWN (Photo credit should read FREDERIC J. BROWN/AFP/Getty Images)
China

Ma Xiaohong, a well-presented businesswoman from Liaoning Province in China’s northeast, enjoyed over a decade of success with her export firm, the Hongxiang group, and even dabbled in local politics.

Once lauded as an “outstanding Communist Party member” by the state for becoming an entrepreneur at age 29, stormclouds appeared over Ma’s career in September. Her position as a representative to Liaoning’s legislature was revoked after the authorities found her and hundreds of other delegates guilty of obtaining their seats through illicit means.

That was a beginning, not an end. On Sept. 20, Ma Xiaohong, now 44 years old, and her Hongxiang Industrial Development Co. Ltd. were placed under criminal investigation for the sale to North Korea of materials needed for Pyongyang’s resource-hungry nuclear weapons program.

And as many such cases in China go, there is probably more to the Hongxiang scandal than meets the eye.

Ma and her family have been arrested—new targets of the Chinese regime’s persistent anti-corruption campaign that began four years ago. She and her company have been indicted by the U.S. Justice Department for violating sanctions designed to cut off capital and support for North Korea’s atomic ambitions.

But Ma wasn’t acting alone. Her rise and fall fit into a world of broader intrigues afoot in the opaque environment of Chinese regime politics, as well as in the related dealings with its North Korean clients.

Despite fighting on the same side in the Korean War (1950-1953), North Korea and China have enjoyed lukewarm relations and glaring conflicts of interest in recent years.

The impoverished totalitarian state of North Korea has been an economic liability and diplomatic embarrassment for the much larger and successful Chinese regime, and threatens to destabilize the region with its challenged but tireless efforts to develop a credible nuclear arsenal.

Moreover, while China has long propped up the North with fuel and food, it has also developed a significant economic relationship with Kim’s enemy, South Korea. Adding insult to injury, Xi Jinping has never met Kim Jong-un—a break from previous Chinese leaders—but has been seeing South Korean president Park Geun-hye in person since before either politician came into office.

A notable case of Kim getting the cold shoulder in Park’s favor was last September, when multiple foreign leaders came to Beijing to attend a lavish World War II victory parade. While Park stood near Xi (with Russian president Vladimir Putin between them) reviewing the troops, the North Korean delegation was not even in the same section.

China has much to gain from a cordial relationship with South Korea. Besides providing a trade partner to help stimulate its own slowing economy, maintaining strong business ties with Seoul gives China greater powers of persuasion over the U.S. ally’s actions in the region, such as disputes in the East and South China Seas.

The investigation into Ma Xiaohong and the Hongxiang group’s exports across the Yalu River raises questions about the extent to which China is prepared—or able, considering the influence of entrenched corrupt interests—to help bring an end to North Korea’s nuclear program.

In 2012, when Kim Jong-un took over from his late father, Kim Jong-il, he was not yet 30. Both men have continued the Stalinist legacy of Kim Il-sung, Jong-il’s father and the communist dictator who ruled North Korea from the end of World War II to his death in 1994.

Xi’s path into office was shrouded in greater complexity, being the result of clandestine deals and posturing between various cliques and interests in the committee-led Chinese Communist Party.

A number of high-ranking officials who owed their positions to the patronage of former Party head Jiang Zemin have had roles in working closely with North Korea.

According to Chinascope, a media research site, officials aligned with Jiang Zemin have sought to maintain the historically close relationship with North Korea so as to validate communist ideology, while at the same time using it as a point of geopolitical leverage against the United States and its regional allies.

Zhang Dejiang, a member of the seven-man Politburo Standing Committee that runs the Communist Party, studied economics in Pyongyang. While serving as party chief of northeast China’s Jilin Province, he was praised and promoted by Jiang Zemin for his harsh policy on North Korean refugees who crossed the border.

Security chief Zhou Yongkang, who was purged in 2014 and sentenced last June, made a high-profile visit to North Korea in 2010 and had four meetings with Kim Jong-il in the three day period. All three men have close ties to Jiang Zemin.

In 2013 Kim Jong-un had had his uncle, Jang Sung-taek, arrested and executed. Some say that Jang died because Zhou Yongkang leaked the content of a meeting between him and outgoing Chinese leader Hu Jintao, in which the high-ranking North Korean official and husband of Kim’s aunt discussed a possible replacement leader of North Korea.

For 12 years until 2015, the head of the Communist Party’s International Liaison Department was Wang Jiarui, a man who frequently met with North Korean officials and often accompanied Chinese leaders to the “Hermit Kingdom.” According to foreign policy expert Cheng Li of the Brookings Institution, Wang is a protege of Jiang Zemin.

The recent dismissal or resignation of hundreds of Liaoning provincial and national-level lawmakers came years after Xi Jinping launched his anti-corruption campaign that took down key figures associated with Jiang Zemin, including many who had developed their careers or support bases in Liaoning Province.

After leaving the province, they promoted their own lieutenants, most of whom were cleared out in the months leading up to the legislative purge.

While no direct evidence can yet be confirmed linking businesswoman Ma Xiaohong to any high-ranking officials, some doubt she would have been able to export sensitive materials to North Korea without backing from national-level authorities.

“This has gone far beyond the realm of normal commerce,” said political commentator Wen Zhao with New York-based New Tang Dynasty Television, referring to Hongxiang’s illegal export of materials needed for uranium enrichment such as aluminum oxide. “It concerns international relations. This is not something that the local authorities, or Ma Xiaohong herself would dare to do.”

Ma Xiaohong had opened a Sino-North Korean hotel in Shenyang, provincial capital of Liaoning, called Qibaoshan in Mandarin and Chilbosan in Korean. The Korean cyberwarfare unit 121, Wen said, operated out of this hotel, something that Ma could not have arranged were it not for close cooperation with higher officials.

Li Feng, a Liaoning police chief, Party legal committee official, and subordinate of Zhou Yongkang (link in Chinese), was purged a few days after Hongxiang was put under investigation. According to state media, Li was fond of excessive drink and collaborated with Wang Min, the former Party secretary of Liaoning whose recent purge prefaced the sack of the provincial legislature.

In an article posted on Sina, a Chinese news site, and then removed by state censors (archived link in Chinese), it was alleged that Li had cooperated with North Korean authorities to sell and spread drugs and counterfeit money made in North Korea throughout China.

According to Voice of America, Ma’s company, which is based in the city of Dandong across the border from North Korea, used seven vessels belonging to a port owned by businessman Wang Wenliang. Wang had procured this facility through dealings with Chen Tiexin, a former party chief of Dandong and other cities in Liaoning. He was purged in 2014.