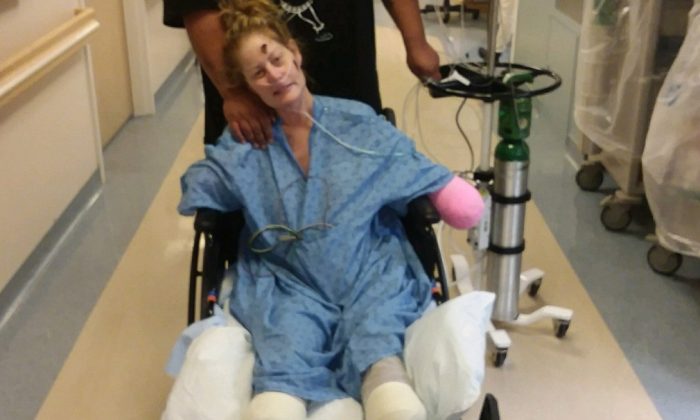 A Utah mother diagnosed with a cold was left without limbs.

Tiffany King, 38, was diagnosed with a cold but that eventually turned into pneumonia, her niece Rielly Fonohema told KUTV.

The pneumonia later turned into sepsis, which prompted doctors to perform a quadruple amputation.

King has Ankylosing Spondylitis, a form of arthritis that primarily affects the spine, according to the Spondylitis Association of America. “It causes inflammation of the spinal joints (vertebrae) that can lead to severe, chronic pain, and discomfort,” the group stated.

King was taking Humira to treat the condition but the medication weakens the immune system, which her family believes led to her getting the cold.

But family members said doctors at the hospital made a decision when trying to save her life that led to the amputations. The doctors put King on Levophed, which is meant to treat low blood pressure and heart failure. The drug cut off blood from King’s extremities, leading to the rare quadruple amputation.

“To save her life, they put her on Levophed, a drug which helps regulate blood pressure; it shunted all of the blood from her extremities to her major organs to keep her alive. This resulted in a quadruple amputation. A quadruple amputation is very rare, but necessary. All 4 prosthetics she will need comes to $225,000, which is not covered by her insurance,” Fonohema wrote on GoFundMe.

“These last 3 months have been difficult for our family because we were dangerously close to losing her,” Fonohema told KUTV.

“At this point, the medical bills, the cost of the prosthetics, the renovating of the home to accommodate to Tiffany and other things that our family will need to financially support her family, we need all the financial support we can get. There is no one you’ll find more deserving, more loving and humble than Tiffany Fonohema [King].”

The family has created a GoFundMe to help assist with the huge medical costs associated with months of hospital care and the amputations.

The funds will also go toward renovating King’s home to accommodate her new life without limbs.

So far, they’ve raised almost $30,000 at the time of this publication.