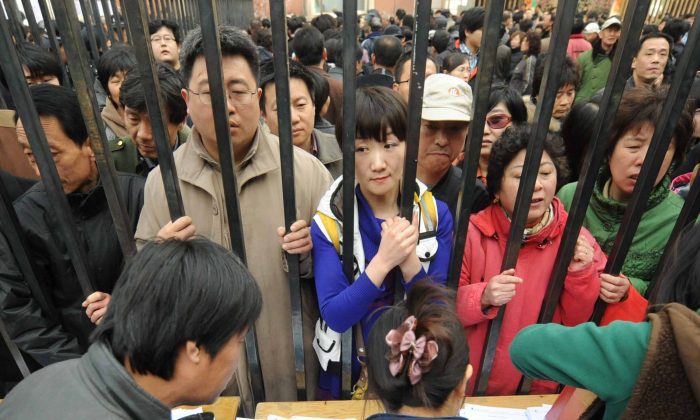 People queue to get better numbers on a waiting list for new apartments after the local government announced the demolition of an old central part of Tongzhou, in the western suburbs of Beijing on April 8, 2010. (STR/AFP/Getty Images)
China

As a weeping Ms. Pan watched her home being razed to the ground, she begged Hua Guojun, the official ordering the demolition, to stop.

“If you have any complaints you can sue the government,” Hua replied with a smile.

Identified only by her surname, Ms. Pan is a businesswoman in Anhui Province in eastern China. She owned a bathhouse, which was destroyed to make room for developers, state-run Chinese newspaper Southern Metropolis Daily reported on June 18.

Hua Guojun, who stood at the site of the demolition, is an official with the local bureau in charge of handling appeals and petitions.

Though appealing to higher authorities to address local grievances is a time-honored practice originating Imperial China, for Pan and many others, it is little more than a piece of bureaucratic rhetoric touted by the Communist regime.

“The government is preparing the paperwork,” Hua told Pan, as can be seen in a video posted to Chinese social media. “The demolition is in accordance with the law.”

When Pan demanded further explanation, Hua continued to laugh and beat around the bush, saying “I’m not saying you won’t be compensated. Go ahead and file a lawsuit. If you don’t’ file a lawsuit, you definitely won’t get anything.”

Compulsory, state-mandated demolition is a common method used by Chinese officials to circumvent normal procedures that would otherwise involve lengthy mediation with the property owners. Usually colluding with developers, officials opt for the “shoot first, ask questions later” route—following a forced demolition, the burden of bureaucracy shifts to the victim, who must take it upon him or herself to piece the case together and file it with the authorities in hopes of obtaining fair compensation.

Luckily for Pan, online outrage resulted from the video after it went viral on multiple Chinese social media platforms. This seems to have prompted the district government to announce on its website that it would work with her to resolve the case, and that Hua Guojun would have to write a “detailed self-criticism.”

Away From the Barricades, an Argument About Rule of Law in Hong Kong

Chinese Judge on Shackles: ‘Who Cares If It’s Illegal?’

Interestingly, the statement only specified that Hua was obligated to apologize to the online community, not Pan herself.

“That’s it? Only writing a self-critique?” said a netizen from Fujian on Sohu, a Chinese internet portal.

Another pair of comments, appearing on the website of China’s Phoenix Television, mocked the district government’s statement.

“Why apologize to netizens?” said one.

Another said, “‘Apologize to netizens,’ ha, who should you really be apologizing to?”