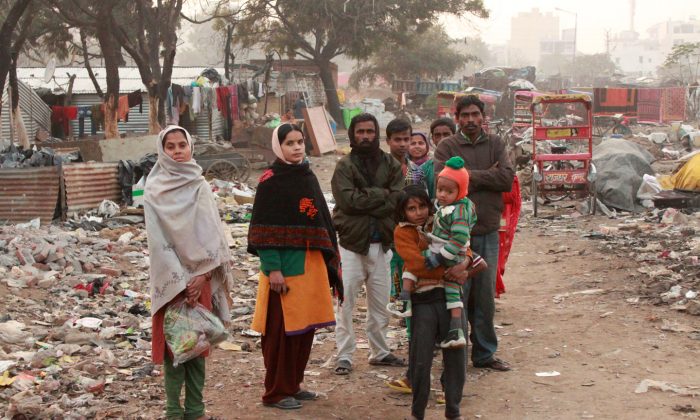 Residents of a slum in the Kanega locality of Gurgaon city in Delhi on Jan. 15, 2015. They have no toilets and have to defecate in a open dump of garbage and construction waste nearby. (Venus Upadhayaya/Epoch Times)
India

How a Bathroom in an Indian Slum Would Change Residents’ Lives

NEW DELHI—Amidst high-rise apartment buildings and corporate offices in Gurgaon city southwest of Delhi, an open area filled with household and construction waste acts as the toilet for 70-80 families in the slum next door.

Dried up feces can be seen all around and the air smells fetid. Pigs roam around, rooting up trash and dirt. Children can be seen walking on a footpath nearby, some even barefoot.

This slum in the Kanega area of Gurgaon city hasn’t yet seen the “Clean India” campaign that India’s Prime Minister launched in October last year. The campaign promises to provide access to toilets for all Indian citizens by 2019 to stop open defecation and improve sanitation in the country.

On a policy level, this would help prevent the spread of diseases like diarrhea, which the World Health Organization (WHO) says contributes to the death of 334,000 children in India a year.

On a personal level though, a toilet would mean a dramatic change in the lifestyle of these slum dwellers.

“There’s a lot of problem to go to bathroom,” said Bajaru Mohammad, a slum resident who makes a living driving a rickshaw.

Having no indoor toilets or even communal bathrooms, they defecate by hiding in the niches created by the heaps of waste, often going when it is dark for extra cover. Even so, they say it doesn’t give them much privacy.

“People see us from here and there,” said Nazmul, a male resident of the slum, gesturing around him.

For women, it is even more difficult. They deal with the added threat of harassment from males who have been known to catcall, grope, and in the worst cases, rape them when they try to relieve themselves.

“If we go here in the daytime, boys start following us,” said Shehnaz, one of the slum’s female residents who works as a domestic helper in the apartment buildings nearby.

Shehnaz says she goes out between 3-4 in the morning to relieve herself so at least she has the privacy of the dark.

But the darkness also comes with its own risk to these women, who try to go out in groups for safety. With less people around to answer a call for help and the darkness acting as a cover, women become easy targets for rape.

More than 60 percent of the rapes in the state occur when the victims step out to relieve themselves because they do not have toilets at their homes.
— Ashish Gupta, the police chief of the state

In a shocking case, even by Indian standards, two teenage girls were ambushed, raped, and hung from a tree in the northern state of Uttar Pradesh while they went out in the early morning last May. While this was an especially violent assault, it highlighted a very common problem.

“More than 60 percent of the rapes in the state occur when the victims step out to relieve themselves because they do not have toilets at their homes,” said the police chief of the state, Ashish Gupta, according to AP.

In India, 594 million people defecate in the open, according to UNICEF, the UN’s children’s fund.

Open defecation is much more common in rural areas, where plentiful land and high poverty make the fields the only affordable toilet for many. When people leave the country and move to the city, they often end up in slums, where the habit continues.

For women in the slums who work as domestic helpers, they have access to toilets in the apartment complexes where they work. Men who work in the city as day laborers or rickshaw drivers often have to find construction sites or waste-ridden areas to relieve themselves during the day. Having more access to toilets anywhere would be helful, but especially at home.

“It’ll save us the trouble of roaming in the cold everyday looking for a safe place to relieve ourselves,” said Nazmul.

Bindeshwar Pathak, the founder of an NGO called Sulabh International that is working to provide toilets across the country, says it is a challenge to get them in slums. Often the slums are illegally constructed and move around, so any bathroom there would have to be portable.

Maintenance of public toilets has also been a problem as many slum dwellers are first-generation toilet users, and organizations working on this issue report difficulty keeping them clean.

Sulabh has constructed public “pay and use” bathrooms in a few slums for which the organization sells monthly passes to families there for 30 rupees ($0.50) a month. While extremely cheap for a 5-10 person family, it is still too expensive for a family that doesn’t find it a priority.

“In some cases, the people are not ready to purchase monthly tickets,” said Pathak.

“To make India free from defecation in the open, we are suggesting that public toilets should be maintained out of the funds provided from the public funds or by the municipal authorities,” he said.

The Prime Minister’s Clean India campaign is still in its nascent stages and it remains to be seen if it will come to fruition. The former government’s “Nirmal Bharat Abhiyan” or total sanitation campaign, with similar objectives to the Clean India campaign, failed on its promises due to corruption, and lack of funding and political will.

Correction: The number of children in India whose deaths are attributed to diarrhea each year is 334,000, according to a WHO 2012 bulletin