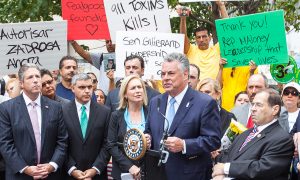 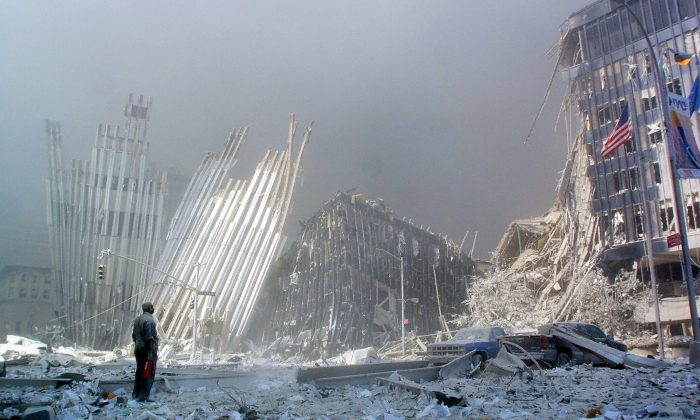 A man standing amid rubble calls out asking if anyone needs help following the collapse of the first World Trade Center tower in New York on Sept. 11 2001. (Doug Kanter/AFP/Getty Images)
New York

NEW YORK—Everyone who is old enough to remember that day 13 years ago now known as 9/11 knows just what they were doing, where they were, and who they were with when they found out that New York City had been attacked. What is difficult to remember are the hours, days, weeks, months and years that have followed during which the U.S. drastically changed.

For some, the difference is a subtle change in social norms.

“We’re more polarized, we’re less civilized,” said Phil Hirschkorn, a former CBS Evening News producer who was at Ground Zero on 9/11. Hirschkorn added that there was a significant lack of accurate information on and after September 11. He pointed to the 9/11 Commission’s report prepared by the federal National Commission on Terrorism, which wasn’t released until years later, on July 22, 2004.

“What’s interesting is what we didn’t know,” said Hirschkorn. “It took a long time to get the timeline of the day right.”

He and others agree that even with slowly emerging information, it was a day that ultimately became a turning point for the country, and the world. The Pentagon was also attacked by a hijacked plane and another was crashed in a field in Pennsylvania by passengers who foiled their hijackers. Even 13 years later the increased security in airports, public and private buildings, and major transportation hubs is impossible to ignore. For some, they still haven’t become accustomed to it, though.

“I feel it every time I walk in an NYU building and I have to show my ID,” said Mitch Stephens, a journalism professor at New York University. “We’re so terrorism conscious.”

Hirschkorn and Stephens were part of a discussion at New York’s City’s Pace University on the week of the thirteenth anniversary of 9/11. Most of those who took part were journalists who, like Hirschkorn, covered 9/11 from what would later become known as Ground Zero. Run in conjunction with the university’s 9/11 Tribute Center, the audience included survivors as well as relatives and friends of victims.

It was an often painful reflection on how things took a turn the moment the first plane hit the north tower of the World Trade Center.

“This week is a difficult time for the 9/11 community in New York,” said one woman in the audience who didn’t identify herself. She managed to escape from the south tower before it collapsed.

For some, the more immediate aftermath was a reality check like no generation had experienced since perhaps Pearl Harbor.

“I think for a lot of people what 9/11 provided was stark before and after,” said Allison Gilbert, a contributor to CNN.com and the Daily Beast who reported from Ground Zero. Gilbert said she nearly died from inhaling soot and ash. Hospitalized on that day, Gilbert became pregnant a month later because she was so happy to be alive. It was also a moment that impacted her professional focus (she knew she never wanted to be a war correspondent) as she believed it did for others.

Life felt precious. It was a stark before and after.
— Allison Gilbert, journalist who covered 9/11 at Ground Zero

If personal choices were the microcosm of how September 11 impacted the American ethos on a short-term basis, there were other far-reaching, long-term changes at the level of federal government and American foreign policy. Terms such as the “war on terror,” and “al Qaeda” and “Osama bin Laden” became household phrases.

Then President George W. Bush launched a long-term war in Iraq in 2003. It was less than two years after attacks aimed at flushing out al Qaeda and the Taliban in Afghanistan.

The wars in Afghanistan and Iraq have cost the lives of 8,273 coalition soldiers, including 6,830 American soldiers, according to iCasualties.org. Thousands of others, including civilians and terrorists, have also died in both countries and neighboring Pakistan, whose porous border with Afghanistan has drawn them into the conflict.

An annual report called “Costs of War,” produced by over 30 economists, anthropologists, lawyers, humanitarian personnel, and political scientists keeps a tally on the deaths of non-military victims of both wars. That group puts the civilian death count at 174,000 as of April 2014.

There is no reliable count of the number of so-called “enemy combatants” or terrorists who have been killed.

The financial cost to U.S. taxpayers is in the neighborhood of $2 trillion, according to a 2013 Harvard University study. The final figure, including care for some of the 2.5 million members of the American military who have served there, will be closer to $4 trillion.

After 9/11, basic knowledge about terrorism also became household knowledge, in part fueled by the 24-hour news cycle that collided with the dawn of the Internet.

For Andrew Kirtzman, a former political reporter for New York City news stations, 9/11 was a “life-changing event.” Kitzman followed then-New York City Mayor Rudy Giuliani as he waded through the aftermath on that first day. Giuliani, a Republican, was in the last year of his second term as mayor in 2001, and would go on to be a key advocate of President George W. Bush’s policies and actions in response to 9/11.

Kirtzman described the scene at Ground Zero when he arrived as covered in white soot and completely chaotic.

“Amid all of this insanity, the feeling was like, ‘is anyone in charge?'” he recalled. At one point, as Kitzman and others trailed Giuliani while he looked for a place to set up city government, they came upon an empty firehouse. The building was locked because everyone was at Ground Zero. Desperate to get inside, one person took out a gun and aimed it at the lock to try and shoot it off.

“It was at that moment when the guy got out the gun when I was like, ‘we are very lost,'” said Kirtzman.

It was a similar national sense of vulnerability that ostensibly led to numerous changes in domestic and foreign policy, including the government’s reinterpretation of the personal privacy of American citizens.

As later came to light, the shocking element of surprise on 9/11 helped fuel a government-sanctioned ethos that led to widespread phone tapping, email monitoring, and other methods of spying on citizens by the National Security Agency under orders from the highest levels of government.

One thing that didn’t play into 9/11 and its aftermath for years to come was technology. In 2001 there was no Facebook or Twitter. There were no smartphones. Cellphone networks collapsed from overuse. The Internet was more commonly known as the World Wide Web, and it also couldn’t withstand the amount of traffic the day’s events generated.

People had to rely on the good old-fashioned television, radio, and landline telephones.

“In some sense it was the last great moment of traditional journalism,” said journalism professor Stephens, whose son tried to go online to find information but gave up after five minutes because networks were overloaded.

The boy joined his father in front of the television to see what was unfolding, as did much of the country and the world. “Journalism was crucial in giving people a sense of what was happening.”