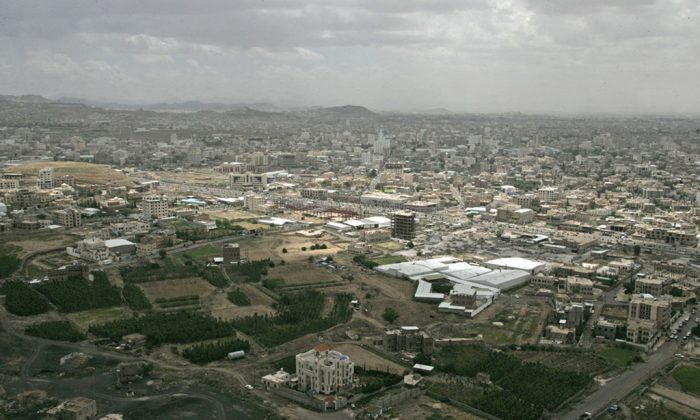 A view taken from a high position on the outskirts of the capital Sanaa on July 13, 2010. (Gamal Noman/AFP/Getty Images)
Middle East

SANAA, Yemen—Yemen’s Shiite rebels defeated rival tribesmen and took control of a northern district of the capital on Saturday, expanding their control of the city, their spokesman said.

Mohammed Abdel-Salam, spokesman of the rebels known as Houthis, said the forces took control of Arhab, a district of greater Sanaa. The group already controls most of the capital and several other cities.

Military and tribal officials said the Houthis used tanks and artillery to shell houses and neighborhoods of rival tribes. The fighting left dozens dead, including 12 tribesmen, they added. Houthis usually refrain from announcing deaths among their ranks. All officials spoke on condition of anonymity because they were not authorized to speak to the press.

Soldiers at the Hawdh area’s border crossing had sent the car to a nearby police station to have policewomen check its occupants’ identities.

The officials said one of the disguised men shot a soldier who had boarded the car, slightly wounding him. He immediately opened fire with an automatic rifle in response, killing the three and injuring the driver, who later confessed that he and the three disguised men are al-Qaeda members who had planned to attack Saudi border guards by suicide bombing.

The officials, who spoke on condition of anonymity because they are not authorized to brief the media, said the driver told the border guards he was taking his family to visit Saudi Arabia.

In July, three al-Qaeda militants and two border guards were killed in a car bomb attack and fighting at another border post, while other gunmen managed to enter Saudi Arabia in two cars.

Yemen’s local al-Qaeda branch, also known as al-Qaeda in the Arabian Peninsula, claimed responsibility for those attacks. The group is considered by the U.S. to be the world’s most dangerous branch of the terror network and has been linked to several failed attacks on the U.S. homeland.