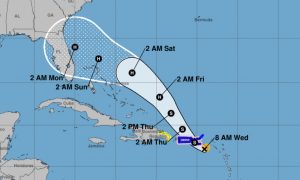 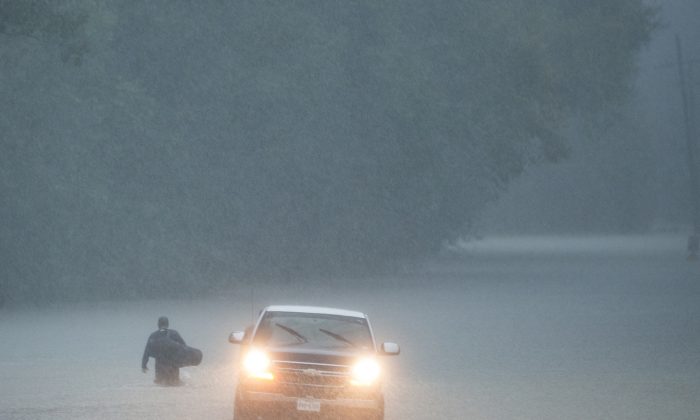 A man wades through water in his neighborhood as rain from Tropical Depression Imelda inundates the area on Sept. 19, 2019, near Patton Village, Texas. (Brett Coomer/Houston Chronicle via AP)
US News

Jim McIngvale was compelled once again to turn his mattress showroom into a temporary shelter during Tropical Storm Imelda.

The salesman is known in the Houston area as ‘Mattress Mack’ and more recently as a guy with a big heart.

Imelda made landfall on Tuesday, and by Thursday, the 68-year-old McIngvale could see the destruction the storm was causing. The news was showing first responders rescuing people from homes, and freeways turning into rivers, with people getting trapped in their vehicles.

“These guys are unbelievable … have been out all day,” McIngvale said of his employees who had been out rescuing victims of the flooding. “It’s another tough situation, but we’re going to be here to help like Houston always helps us.”

Imelda has killed two people and forced at least 1,000 other residents to evacuate. It’s caused the most catastrophic flooding to Houston and Beaumont, Tex., since Hurricane Harvey in 2017.

“One of the best things about Houston is we come through these dark hours very well. I know it’s devastating when water is coming in their house, devastating when their cars are flooded. We got through Harvey; we’ll get through this, let’s keep our chins up, keep helping each other.”

It was reported that the storm dropped an estimated 5 feet of rain in some areas of Houston.

On Thursday, McIngvale opened his doors to about 120 people, rescued by Mattress Mack’s furniture sales team from homes, abandoned cars, schools, and more. They welcomed the residents rescued from the flood and provided water, jackets, and a place to sleep if they needed it.

McIngvale says he is a Catholic, and he tries to practice what his faith teaches him. He has not just helped in these most severe situations but donates to charities regularly—donating food and furniture to needy families during the holiday season.

Imelda is the first named storm to hit the Houston area since Harvey, a category 4 hurricane, inundated the Gulf Coast in August 2017.

By late afternoon Thursday, the rains had mostly abated, but officials warned millions of people in the area to stay put and not move, as it would take several hours for floodwaters to drain off.

“If you’re at school, stay at school. If you’re at home, stay at home. If you’re at work, stay at work,” said Lina Hidalgo, the Harris County judge, at a press conference as she declared a state of emergency for the Houston area. “Right now, it’s about life safety.”

Rescue crews and volunteers with boats tried reach scores of stranded drivers and families trapped in their homes on Thursday, with officials in Harris County, which includes Houston, saying there had been a combination of more than 1,000 high-water rescues and evacuations to get people to shelter. The storm also flooded parts of southwestern Louisiana.

The National Weather Service also indicated that preliminary estimates showed that Jefferson County was swamped with more than 40 inches of rain in just 72 hours, which would make Imelda the seventh wettest tropical cyclone in U.S. history.