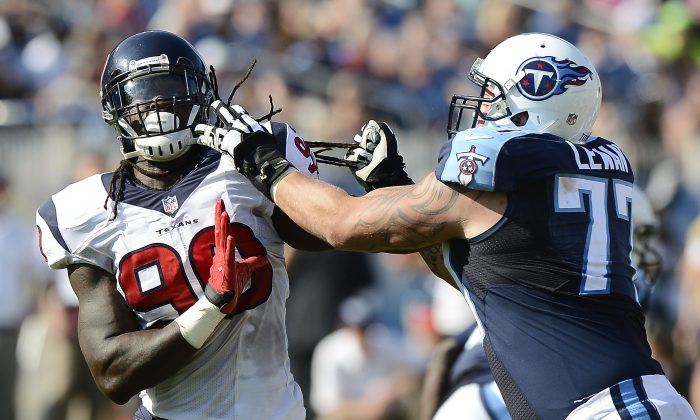 Following Sunday’s victory over the Titans, the Houston Texans will face the Jacksonville Jaguars on Sunday. Here’s some of the latest updates.

Clowney out for season

Rookie DE Jadeveon Clowney was placed on season-ending injury reserve after it was determined that he needs surgery on his right knee.

Texans coach Bill O’Brien said, “This guy’s been injured and it’s time to clean it up and get him back to feeling good and get him back on the field as soon as we can,” according to the Houston Chronicle.

He didn’t elaborate on what kind of injury it is.

“He wants to play football. He wants to be good so I think he was disappointed right off the bat,” O’Brien added. “But I think he understands what he has to do and why this is necessary and he knows that he has to rehab hard and get back out there.”

Clowney has only played four games this season. “With any young player, you’re disappointed when you hear the news that you can’t play,” O’Brien also said, according to the paper.

He was evaluated by Dr. James Andrews, who took another look at his knee.

“A lot of pain right now, just been bothering me off and on the whole season,” Clowney said a few weeks ago. “Something I’ve got to push through, but when the swelling comes up, it’s a little setback.”

WR Andre Johnson laid out his goal: 15 years in the NFL–all with Houston.

“I don’t want to play for nobody else,” Johnson said Thursday, according to NFL.com. “I’ve been here for 12 years. It don’t think it would feel right. I’ve seen everybody come and go in this locker room … (My) locker has been here the longest. I can’t imagine how it would feel to put on someone else’s uniform … You always want it to turn out OK. I want things to work out here.”

He also heaped praise on fellow WR DeAndre Hopkins, who is now considered the Texans’ No. 1 receiver.

“He played lights out on Sunday,” Johnson said. “He’s grasped this system and you can tell he loves playing in it. I’m just happy for him. He’s come in and worked hard.”

Several NFL players who faced DE JJ Watt described what it’s like for ESPN this week.

Said New York Giants right tackle Justin Pugh: “He’s someone that’s constantly moving. If you’re on the back side of a play and you’re thinking, ‘Oh, he may take this play off’ where a lot of guys do, like, ‘He’s not going to try to get this outside stretch run that’s all the way across the field.” He’s the type of guy that’s going to try to chase that down, and that’s why you see a lot of times he’s in the right place at the right time, because he’s hustling. His work ethic is what makes him great, and he’s got a chip on his shoulder.”

Steelers right tackle Marcus Gilbert added: “You never know what he’s going to do because he’s so unpredictable. He has great strength, great explosion off the ball, and he is quick laterally. He is one of the toughest guys I’ve faced because he studies the game, so you really have to prepare for him. You actually have to be more patient with him and make sure you get your hands inside of him because he’s so explosive and so quick side-to-side.”

Added Cincinnati Bengals right guard Kevin Zeitler: “It’s just that he can do everything. He’s strong, he’s quick, he’s relentless. He’s an entire package as a pass-rusher. There’s so many guys you can hit, and the play is over and you’re set and it’s fine. But with him, it’s never over. He always has something coming. He knows how to react to any situation.”

Fitzpatrick was benched for Ryan Mallett, who was injured last month, and he said it gave him some perspective.

“I think that being able to look at it at a different perspective, take a step back, and see it from a different view, I do think it helped a little bit,” Fitzpatrick said. “I think that and me going back and evaluating myself I think those were two factors that helped me out.”

Fitzpatrick, who has played for five different teams in his 10-year career, said that “to be a successful quarterback in this league, it’s all about self-confidence.”

“Never losing that belief in yourself and that’s something that I will never lose,” he added.