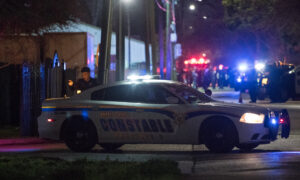 Texas police are probing a shooting that took place Thursday evening at the Downtown Aquarium in Houston, leaving two people dead, including a suspect, officials said.

Houston police responded to reports of a shooting on the second floor of the aquarium at around 8:10 p.m. Thursday evening. According to FOX 26 Houston, at least one other person was injured in the incident.

Houston Police Department Lt. Larry Crowson told KPRC-TV in Houston that the suspect allegedly shot a man and a woman before turning the gun on himself.

The woman was transported to the hospital to be treated for her injuries, and is reportedly in stable condition. Both men were pronounced dead at the scene.

According to a preliminary report issued by HPD Asst. Chief Matt Slinkard, the two targets of the attack were sitting at the bar having dinner, and were approached by the suspect as they were closing their tab, ABC 13 reported.

”This suspect got up, and in a very quick manner, went around the bar to the area where the male and female were together,” said Slinkard. “At the time, the suspect immediately starting firing rounds. The deceased male immediately went down.”

“The female who was injured went down as well, and then, from the footage that we’ve seen, this person we know to be our suspect that’s deceased on the scene immediately committed suicide with one self-inflicted gunshot wound,” he added.

Slinkard said surveillance camera footage is being examined by officers.

“It does not appear that these parties were together,” he added. “We have very little to go on except that footage.”

The motivation behind the shootings is still unclear. No other injuries were reported.

“This is the type of situation that should make us all pause for all of the families and all of the lives that will be affected,” said Slinkard.