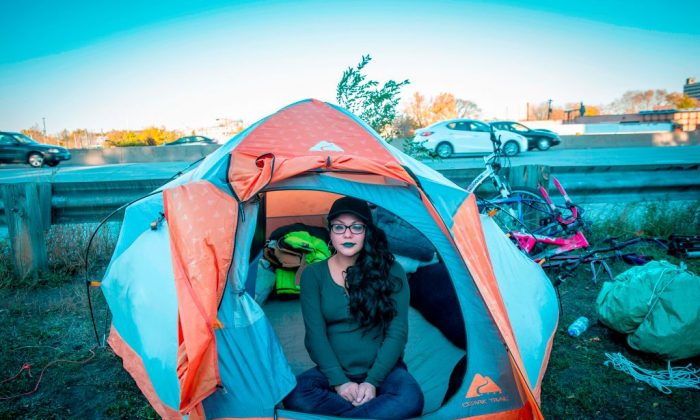 A young woman in her tent on Oct. 22, 2018. She is among the more than 200 people who live at the large encampment along Hiawatha and Cedar Avenues in Minneapolis, Minnesota. (KEREM YUCEL/AFP/Getty Images)
Viewpoints

NIMBY barriers hurt the most vulnerable among us

A glaring disparity between North American cities has accentuated in the past decade: housing affordability. As house prices spike in specific locales, they make ownership a dream rather than a reality.

Higher rents also eat away at the disposable incomes of residents. The squeeze means many locals simply must leave, and it spawns homeless populations that include the working poor.

For example, in Vancouver, Canada, the median house price is $709,000, while the median household income is $56,000. Theoretically, if 100 percent of pre-tax income were placed towards a home at 0 percent interest, each household would need 12.6 years to complete a purchase. In practical terms, not a chance.

The victims of too few affordable homes are in plain sight: Vancouver’s homeless and shelter populations have ballooned over the past decade. This includes hundreds of able-bodied youths and persistent tent cities in one of the world’s most advanced nations. The majority of surveyed homeless people have incomes, but simply can no longer afford rents. In fact, as reported by the Vancouver Courier, four-fifths were paying their rents in the city prior to losing housing access.

What makes this problem so perplexing is that it is entirely preventable. All cities suffering from out-of-whack house prices share common policies that suffocate supply.

This conclusion is impossible to miss in the 15th Annual Demographia International Housing Affordability Survey, released Jan. 20 by the Frontier Centre for Public Policy, a think tank based in the Canadian prairie provinces. Written by economists Wendell Cox and Hugh Pavletich, the survey shows that culpable city officials insist on “smart-growth” central planning and tight housing regulations.

Their survey covers the Anglosphere: Australia, Canada, Hong Kong, Ireland, New Zealand, Singapore, the United Kingdom, and the United States. It ranks 90 cities of more than 1 million residents in the eight countries according to the price-to-income ratio (PIR), also known as the median multiple.

This metric divides the median house price by the median annual gross household income. Although housing sizes and qualities differ by location, the authors’ approach offers a measure of yearly pre-tax income necessary to purchase a house, ranging from affordable (3.0 and lower) to severely unaffordable (5.1 and higher).

The chief finding is that affordability has declined markedly over the past three decades. Incomes may have risen, but house prices have risen at a faster clip.

New Zealand shows the worst result, with prices relative to incomes more than doubling. Canada and the United States saw one-third and one-quarter increases, but the results were disparate across the map, with affordable cities offsetting and concealing the severe problems elsewhere.

Conversely, Cox and Pavletich prove that a thriving economy is compatible with more affordable housing. Their findings point to major cities such as Atlanta, Chicago, Dallas, Houston, and Philadelphia.

The Worst of the Worst

Hong Kong has earned its reputation for a dysfunctional housing market, with literal cages passing as homes. It tops the chart with a PIR of 20.9, since only 3.7 percent of the Chinese city-state is zoned for urban housing.

Throughout the study’s 14 years of existence, Canadian and U.S. cities have ranked among the least affordable in the world. Vancouver’s 12.6 PIR comes in second, and it was among the first profiled municipalities with land-use restrictions, almost 50 years ago.

House prices in Toronto, the second-worst in Canada, have more than doubled since 2004, and approximately 700,000 people have left the city since 2010. One of the culprits is the 2006 plan that impeded apartments and urban sprawl. Instead, it encouraged a contained supply of dense, multi-family structures that Canadian families simply didn’t want.

California takes the crown for the U.S. state with the most expensive cities. San José, Los Angeles, San Francisco, San Diego, Sacramento, and Riverside-San Bernardino all have price-to-income ratios of 5.6 and higher.

California’s homeowners have become an entitled class, resisting policies to free up land and lower prices to more natural levels. The consequent costliness has taken a toll on competitiveness and economic growth, as workers flee the state.

The special-interest reaction, though, is hardly unique to California. “Without fail,” the authors write, “the survey sets off a chorus of criticism from the usual interests within the political, financial, and property sectors.”

Canada and the United States still have the most affordable housing markets in the survey, which helps identify the underlying cause. Cape Breton, Nova Scotia; Moncton, New Brunswick; Rochester, New York; Syracuse, New York; and Pittsburgh all offer accessible housing and could be particularly attractive to those who work remotely.

Successful cities with vibrant economies tend to attract workers and high-income families who drive up the price of real estate. However, from Hong Kong to Miami, political barriers—which restrict available land—keep markets from naturally servicing the increased demand.

Quality of Life in Cross Hairs

Despite lofty claims, so-called smart growth movements are pushing out those who need urban housing the most. Aside from taxes, housing tends to be the single most expensive item in any family budget.

Policies that keep prices artificially high to benefit homeowners and rent-seekers are an inexcusable driver of inequality. Platitudes for subsidized public housing amount to nothing more than a band-aid solution that can’t defer major trends.

The consequences of this crisis shape not only cities but lives: Families must settle for smaller houses or condos, and workers have to endure longer commutes and less free time. Less money is available for food, education, or entertainment.

Migration toward metropolitan areas is inevitable in a service- and knowledge-driven economy. However, NIMBYs and city planners need not ostracize these workers and can liberate construction and renovation to meet demand.