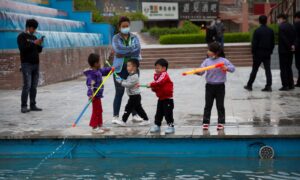 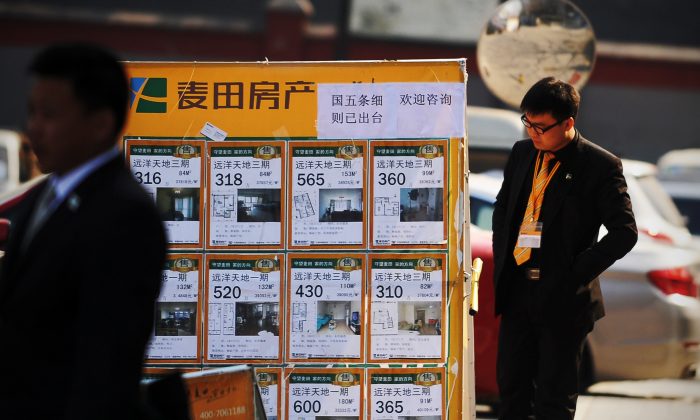 Some cities had experienced prices multiplying by factors of 10 recently, causing official concern, and locking prospective homeowners out of the market, CNBC reported.

Since the implementation of the new policies, sales for new and pre-owned housing have sharply declined in first-tier cities, such as Beijing, Shanghai, and Guangzhou, according to local realtors and official statistics.

Secondhand housing turnover in Beijing has sharply declined since March, says a leading agent in the real estate industry.

Mr. Jing of the Beijing Homelink Real Estate, told The Epoch Times that transactions in suburban Dingfuzhuang had dropped 88.6 percent from 7 million yuan (about $1.37 million) in March to 0.8 million yuan ($129,961)in April. Most of these transactions came from middle-income residents. “Many clients went to the less expensive Yanjiao area to buy property. That’s outside of pricey Beijing,” he added.

New property turnover has also declined, according to a May 1 report from state-run media China National Radio. Sales of new development housing in Beijing fell to 7,188 units in April, a 63 percent drop from March’s figures.

Although the regulations have yet to be implemented in Guangzhou, its property market has been similarly affected.

You Guixiang, a staff member of Guangzhou Bola real estate brokerage, told The Epoch Times that business had been slow, with intermediary transactions down by two-thirds. “Before the regulations were implemented, there was a panic; people rushed to buy or sell. After these regulations were in place, what was planned had been accomplished, so transactions slowed down.”

According to the same May 1st report from China National Radio, Guangzhou also experienced slowdowns in the new property market. In April, fewer than 3,000 transactions were made, that was a 20 percent decline from March.

Discussing the declining market turnover, Huang said, “I personally think it’s normal. There was a panic in March, but after the regulations were implemented, people felt that they had no need to hurry.”

Huang explains, “The main reason is that before the five new policies were implemented, there was no 20 percent capital gains tax, which meant that secondhand housing transactions went more quickly. Now though, new properties are not subject to the 20 percent tax, the new regulations stipulate an increase in both down payments for a second property and interest rates. These have slowed down sales.”

Huang believes the decline of pre-owned property sales is inevitable as the property market cannot absorb the impact of the 20 percent capital gains tax in the short term. In addition, the oversupply of real estate will put downward pressure on housing prices.

Translation by Virginia Wu. Written in English by Carol Wickenkamp