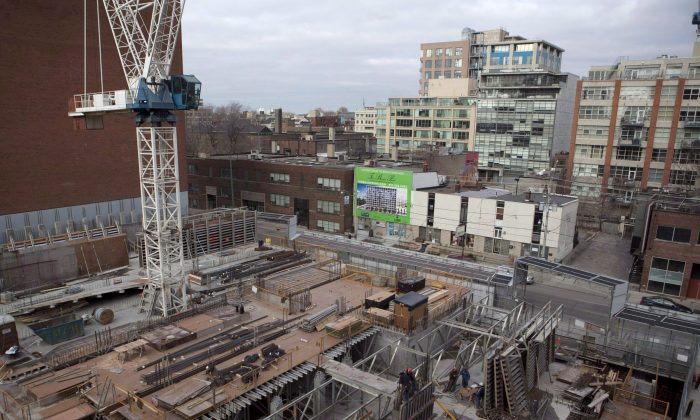 A condominium under construction is shown in Toronto in this February 2012 file photo. Major housing markets diverged in November 2013 with a Greater Toronto Area sales decrease offsetting an increase in sales in Vancouver. (The Canadian Press/Pawel Dwulit)
Canada

Canadian housing data for November suggests a balanced and well-behaved housing market. It’s almost as if no news is good news for the housing market, which continues to be under the watchful eye of the federal government.

November national home sales moved a touch lower by 0.1 percent from October, according to the Canadian Real Estate Association (CREA) on Monday.

“While there has been a lot of volatility in sales activity from month to month, sales for the year to date are on par with fairly steady levels posted for the same time period in each of the past five years,” said CREA chief economist Gregory Klump in a press release.

Major housing markets diverged with the GTA sales decrease offsetting an increase in sales in Vancouver.

“Most housing markets are in balanced market territory, including in many large urban centres where sales are below peaks reached earlier this year,” said Klump.

“The stabilization in home sales through November is an encouraging development that reflects a normalization in activity following what we viewed as a temporary decline in October,” according to TD Securities.

The Multiple Listing Service Home Price Index rose 4.1 percent year-over-year in November. While Toronto showed a decline in sales, prices managed to increase by 5.69 percent; however, Vancouver increased by less than the aggregate rise at 1.02 percent.

According to the Teranet-National Bank House Price Index, monthly readings on prices haven’t really budged in three months. The November reading, released Dec. 12, also declined 0.1 percent after a 0.1 percent rise in October and an unchanged reading in September.

Prices have been trending down in 7 of the 11 regions covered. “Only Vancouver, where prices have risen for seven straight months to reach a new record in November, bucks that trend,” according to a National Bank report.

Year over year, the increase is 3.4 percent for November.

Still, prices should be fairly stable given the Bank of Canada is unlikely to hike rates in 2014; however, the wildcard is the U.S. Federal Reserve, which is likely to begin reducing asset purchases by the first quarter of 2014. Upward pressure on Canadian bond yields could ensue.

The November housing start readings (192k) from the Canada Mortgage and Housing Corporation (CMHC) came out on Dec. 9 and showed a move lower than consensus expectations (195k) and October’s reading (198k).

According to National Bank, the drop in housing starts is “primarily due to a decline in multiple starts in the GTA.” In fact, Ontario was the weakest performer with starts falling 16.6 percent from October and outweighed Alberta’s surge higher by 5.1k starts.

“Starts are also settling in well below levels that prevailed before the fourth round of mortgage rule tightening was announced last June [just over 230k units for all of 2012Q2],” according to Bank of Montreal.

This would indicate that the government should not be spurred into further reining in the housing market based on housing starts alone.

The drop in starts is not a significant one and won’t spread fears of a collapse in housing construction due to oversupply or expected waning demand. The drop represents more of a stabilization. The six-month average trend stands at 194k, according to CMHC.