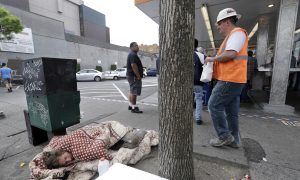 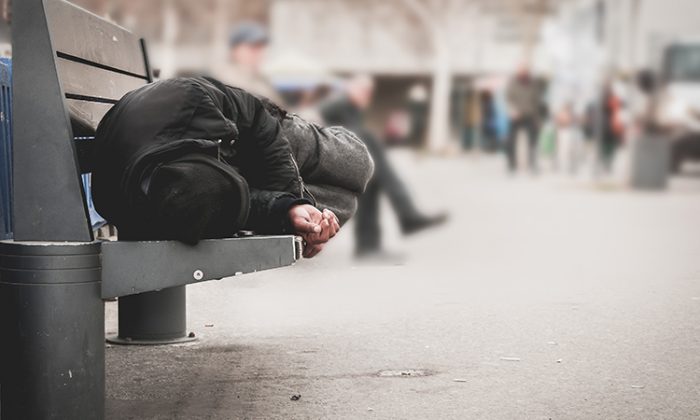 In a statement to The Epoch Times, LAHSA spokesman Sean Wright said, “Our housing and economic crisis pushes people into homelessness faster than our system can help them out.”

There are now 58,936 homeless people in Los Angeles County, a significant increase from last year, when LAHSA counted 52,765.

While the numbers paint a grim picture, the agency stated in a press release that things could have been worse if it wasn’t for the county’s Measure H sales tax. In its second year, Measure H is set to raise about $355 million annually, which is being used to combat homelessness.

According to the agency, rising housing costs has considerably worsened the homeless situation in Los Angeles.

“LA County has a tremendous shortage of affordable housing units,” said Wright. “Rents are rising faster for low-income renters and far faster than wages — median household income decreased 3% between 2000 and 2017. A renter would need to earn $47.52 per hour to afford the median monthly asking rent. More than 2 million county residents pay more than 50% of their monthly income on housing.”

To reduce homelessness, the former economist for the Colorado Division of Housing and Mises Institute fellow Ryan McMaken told The Epoch Times, “local governments must be willing to allow more housing production, and more flexibility in housing.”

In Los Angeles, he added, “governments must tolerate the expansion of housing arrangements such as those in which homeowners rent out rooms of their houses.”

“This sort of thing is prohibited by local regulations [in Los Angeles],” he added.

Furthermore, “local zoning laws must be flexible in allowing construction of homeless shelters and other types of emergency housing for homeless families and individuals.”

Instead of allowing the market to offer affordable options by lessening regulatory restrictions, McMaken said, Los Angeles officials often double down on regulations, discouraging builders from investing in helping the city’s poorest.

As promised by LAHSA, thousands more homes will be developed for the homeless by using taxpayer money, with “Prop HHH funds [being] currently dedicated to 5,303 units, more than half of the 10,000 unit target.” But as wages remain low in comparison to the rising cost of living in the city, adding these units alone may not be able to fix the homelessness issue.

In California, McMaken explained, “ordinary people can experience both income based and cost-of-living based economic hardship because the cost of living is very high, and government regulations put downward pressure on wages and hiring.”

“While minimum wage laws can bring up wages for those who keep their jobs, the overall effect is one in which the least-skilled workers cannot find work because they are not productive enough to warrant employment under the new higher mandated wage. This leads to zero income and a drop in overall household income. Coupled with government limitations on housing supply, this quickly leads to a lack of affordable housing.”

This year, San Diego County authorities said homelessness saw a 6 percent drop thanks to the city’s decision to build bridge shelters and storage centers for the homeless.

“One of the things that we are doing in San Diego, that I think is really having a dramatic effect of getting people off the street is, we’ve established bridge shelters with help and wraparound services. A storage center for belongings that is helping to clean up our streets and our sidewalks. And really a sense of our overall attitude that says a sidewalk or a tarp or a riverbed is no place for a home,” Mayor Kevin Faulconer told Fox Business.

When asked about the large sum the effort is costing the city, Faulconer said that it was “money well spent.”

The “Clean SD” program, which is part of Faulconer’s $3 billion budget, is costing taxpayers $10 million this year — a considerably low amount if compared to what LA’s Measure H is bringing in. But with only 8,000 people living in the streets in the whole county, it’s clear San Diego doesn’t have the same homelessness problem as Los Angeles.