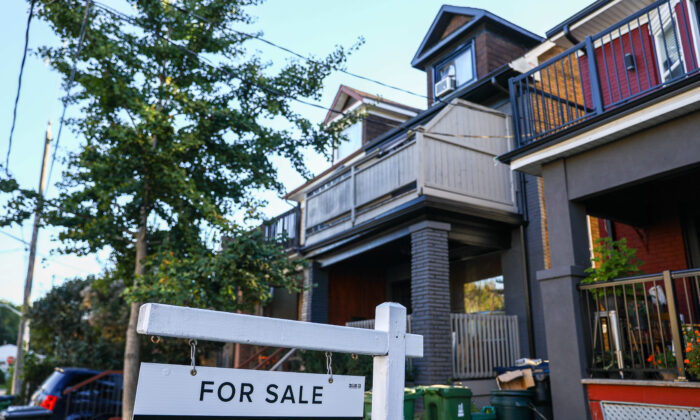 A for sale is sign is displayed in front of a house in the Riverdale area of Toronto on Sept. 29, 2021. (The Canadian Press/Evan Buhler)
Canada

Housing Correction Gaining Pace, to Continue Through Next Year: Report

Desjardins is forecasting the average home price in Canada will decline by nearly 25 percent by the end of 2023 from the peak reached in February of this year.

In its latest residential real estate outlook published on Thursday, Desjardins says it’s expecting a sharp correction in the housing market, adjusting its previous forecast that predicted a 15-per-cent drop in the average home price over that same period.

The Bank of Canada raised its key interest rate by a full percentage point in July, pushing up the borrowing rates linked to mortgages, and further increases are expected this year.

The report also notes housing prices have dropped by more than four percent in each of the three months that followed February, when the national average home price hit a record $816,720.

Despite the adjustment in the forecast, prices are still expected to be above the pre-pandemic level at the end of 2023.

Regionally, the report says the largest price corrections are most likely to occur in New Brunswick, Nova Scotia and Prince Edward Island, where prices skyrocketed during the pandemic.

“While we don’t want to diminish the difficulties some Canadians are facing, this adjustment is helping to bring some sanity back to Canadian real estate,” the report said.

The authors also note that the upcoming economic slowdown will ease inflationary pressures enough for the Bank of Canada to begin reversing interest rate hikes. Desjardins expects the Canadian housing market to stabilize late next year.