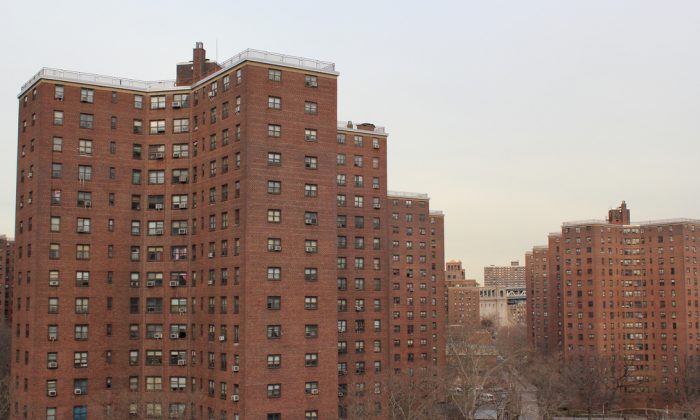 The Gov. Alfred E. Smith Houses, a public housing development built by the New York City Housing Authority in the Two Bridges neighborhood of the Lower East Side of Manhattan. (Courtesy of NYC.gov)
New York

NEW YORK—Characterizing the lack of quality, affordable housing in New York City as a “crisis,” a housing advocacy coalition is sending a message of urgency to the mayoral candidates.

The broad-based organization Housing First! is meeting with mayoral candidates one by one in conversation behind closed doors. Three back-to-back meetings on July 19 with candidates former chairman of the Metropolitan Transportation Authority Joe Lhota, City Council Speaker Christine Quinn, and NYC Comptroller John Liu lasted about an hour each, and were not open to the press.

“All of the mayoral candidates are talking about housing,” said Ted Houghton, Executive Director of Supportive Housing of New York and co-chair of Housing First! by phone after the meetings had concluded. “What was a challenge in New York City has now become a crisis.”

Housing First! is comprised of 36 member organizations that represent a broad range of interests. Members include a number of banks, development companies, housing advocacy groups, and neighborhood and ethnic rights groups.

They are aiming to meet with every mayoral candidate in person for similar conversations, which Houghton described as “very informal.” The sense among the organization’s members, he says, is that housing is related to a number of other social and economic issues.

The platform for the mayoral candidate meetings is a seven-point plan issued by Housing First! in June of this year. The most ambitious and central part of the eight-year, $8 billion plan, is to create and preserve 150,000 units of affordable housing in New York City, including 60,000 new homes over the next eight years.

“We need to be able to address New York City’s housing shortage,” said Houghton, who added that according to their numbers, about 32 percent of New York renters are now spending more than 50 percent of their income on rent.

He added that what used to be a problem of the poor is now becoming an issue for middle class and even wealthy city residents. Though the situation seems dire, Housing First! has been encouraged by the response from mayoral candidates, regardless of political party.

After the July 20 meetings Houghton said that his coalition was encouraged to see Lhota, as a republican, just as engaged as the democratic candidates. They were also impressed by the depth of his knowledge on the issue.

One issue that they have all agreed need some adjustments is the controversial New York City Housing Authority infill plan, which would fill a funding gap by selling off public housing authority land for development.