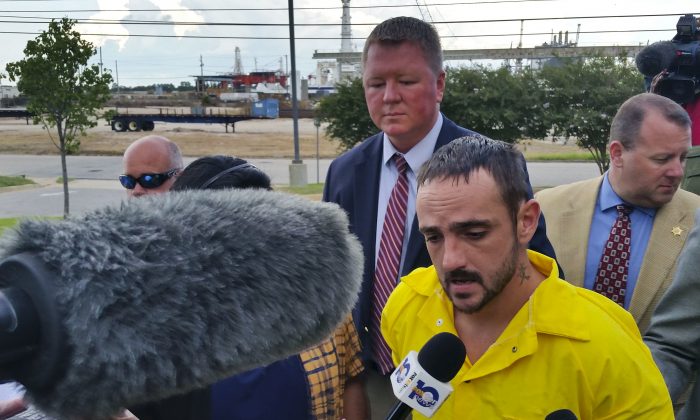 CITRONELLE, Ala.—The south Alabama house where five people were slain with an ax and gunshots has mysteriously burned, authorities said.

Investigators had gotten a tip that the home in Citronelle, Alabama, would be burned—and then it went up in flames Sunday morning, Mobile County sheriff’s officials said.

Derrick Dearman, 27, of Leakesville, Mississippi, is accused by authorities of killing five people, including a pregnant woman, in the home on Aug. 20.

He then kidnapped his ex-girlfriend, Laneta Lester, and a 3-month-old infant Lester grabbed from the house, authorities have said.

An email sent to the sheriff’s department had tipped off detectives that the house would be burned, Mobile County sheriff’s spokeswoman Lori Myles said. Investigators had already finished collecting evidence of the killings at the home before it burned, she said.

No one knows how the blaze started, Citronelle Mayor J. Albert “Al” McDonald tells Al.com. He also said it’s unclear whether it was arson.

“Nobody knows who did it or how it happened,” he told the news site.

Dearman has been held in jail since shortly after the killings, and he has pleaded not guilty to two counts of kidnapping and six counts of murder—one for each adult killed and one for the pregnant woman’s unborn child.

Lester had moved into the home shortly before the killings to escape her abusive relationship with Dearman, sheriff’s officials have said. She was awakened by the sound of a gunshot and watched her ex-boyfriend kill the other five adult occupants of the home: three men and two women, according to search warrant affidavits. Dearman told investigators that he had parked in the woods nearby and injected methamphetamine just before the killings, court records show.