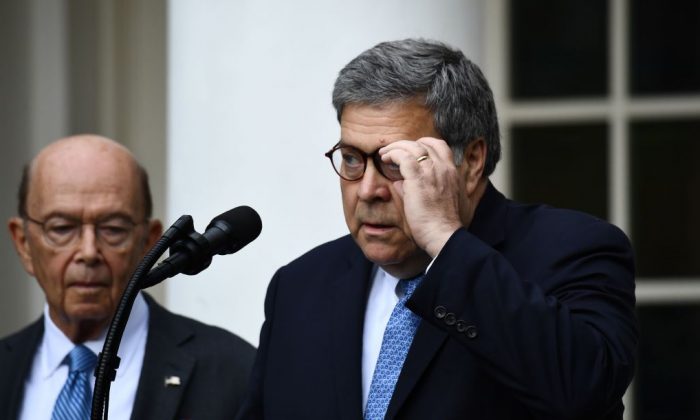 U.S. Secretary of Commerce Wilbur Ross (L) looks on as U.S. Attorney General William Barr delivers remarks on citizenship and the census in the Rose Garden at the White House in Washington, D.C., on July 11, 2019. (Brendan Smialowski/AFP/Getty Images)
Trump Administration

The U.S. House of Representatives voted on Wednesday to hold two top Trump administration officials, Attorney General William Barr and Commerce Secretary Wilbur Ross, in contempt of Congress for not complying with subpoenas related to the administration’s attempts to include a citizenship question in the U.S. 2020 census.

The move comes within an hour of the House voting to kill a resolution to impeach the president.

The House passed the vote at 230-198. The move is likely to be little more than symbolic because the Justice Department is unlikely to prosecute; the House Oversight and Reform Committee had decided to proceed with the contempt vote before scheduled interviews to address the Committee’s concerns, the Department of Commerce explained.

Four Democrats voted against the contempt measure: Reps. Jeff Van Drew of New Jersey, Anthony Brindisi of New York, Conor Lamb of Pennsylvania, and Jared Golden of Maine. All but Lamb are in their first term and all represent swing districts. Independent Rep. Justin Amash of Michigan, who quit the Republican Party earlier this month, voted in favor of the contempt measure.

The move to hold Barr and Ross in contempt was a response to their not releasing privileged documents that were requested by House Democrats as part of a Democrat-led investigation into the Trump administration attempts to add a citizenship question to the 2020 census. The question would read: “Is this person a citizen of the United States?”

“Holding any cabinet secretary in criminal contempt of Congress is a serious and somber matter—one that I have done everything in my power to avoid,” said Rep. Elijah Cummings, the Democratic chairman of the House Oversight and Reform Committee, which is conducting the census investigation.

“But in this case, the attorney general and Secretary Ross have blatantly obstructed our ability to do congressional oversight into the real reason Secretary Ross was trying—for the first time in 70 years—to add a citizenship question to the 2020 census,” he added.

The citizenship question was once included in the decennial census on a different form that was in use from 1820 until 1950. The question at the time was: “If foreign-born, is the person naturalized?”

The White House called the vote “ridiculous” and “yet another lawless attempt to harass the president and his administration,” the Associated Press reported.

“Today’s vote to hold AG Barr and Secretary Ross in contempt made it clear that House Dems will stop at nothing to harass the President and his Administration,” White House Press Secretary Stephanie Grisham wrote in a statement on Twitter.

“The Departments made good-faith efforts to accommodate their requests. They provided more than 31,000 pages of records—but the Dems only keep asking for documents they have no legal right to access.

“Their shameful and cynical politics know no bounds.”

The Departments made good-faith efforts to accommodate their requests. They provided more than 31,000 pages of records—but the Dems only keep asking for documents they have no legal right to access.

Their shameful and cynical politics know no bounds.

Ross concurred in a tweet saying, “Today’s vote is just more political theater [and] doesn’t have any substantive basis.”

“These are privileged documents & they are going to remain privileged. We are not going to be frightened into changing that position. I stand by the President & his assertion of executive privilege,” he wrote.

Today’s vote is just more political theater & doesn’t have any substantive basis. These are privileged documents & they are going to remain privileged. We are not going to be frightened into changing that position. I stand by the President & his assertion of executive privilege.

Ross said in another statement that the vote was unnecessary and was a public relations stunt.

“House Democrats never sought to have a productive relationship with the Trump Administration, and today’s PR stunt further demonstrates their unending quest to generate headlines instead of operating in good faith with our Department,” he said in a formal statement.

“It is an unfortunate fact that there are some who would like nothing more than to see this Administration fail whatever the cost to the country may be. Preferring to play political games rather than help lead the country, they have made every attempt to ascribe evil motivations to everyday functions of government,” he added.

Ross told the oversight committee that the March 2018 decision to add the question was based on a Justice Department request to help enforce the Voting Rights Act.

In a letter late Wednesday to House Speaker Nancy Pelosi (pdf), Barr and Ross asked Democrats to postpone the vote, saying they had shown a “clear record of cooperation” with Congress. The contempt vote “is both unnecessarily undermining” relations between the two branches and “degrading” Congress’s “institutional integrity,” they wrote.

JUST IN: BARR and ROSS write to Speaker Pelosi urging her to cancel the imminent vote to hold them in contempt of Congress >>> pic.twitter.com/UYDpcLts8v

Trump on July 11 announced an executive order that will require all federal agencies to submit existing information about U.S. citizens and non-citizens to the Department of Commerce after the Supreme Court ruled 5-4 against his push to add a citizenship question on the census.

According to Trump, the move would enable the Census Bureau to figure out the citizenship status of 90 percent or more of the population and be more accurate.

The Supreme Court’s ruling said that adding the citizenship question to the census “seems to have been contrived.”

According to the administration, the question was needed to gather data to help enforce the Voting Rights Act.

Trump has since called the issue an example of judicial activism, saying that district courts who were opposed to the Justice Department’s citizenship question “unfriendly to us.”

….to do whatever is necessary to bring this most vital of questions, and this very important case, to a successful conclusion. USA! USA! USA!

He later explained why he wanted the question on the census.

“And by the way, if you look at the history of our country, it’s almost always been asked.”

“They go through houses, they ring doorbells, they talk to people. ‘How many toilets do you have? How many desks? How many beds? What’s their roof made of?’” he said.