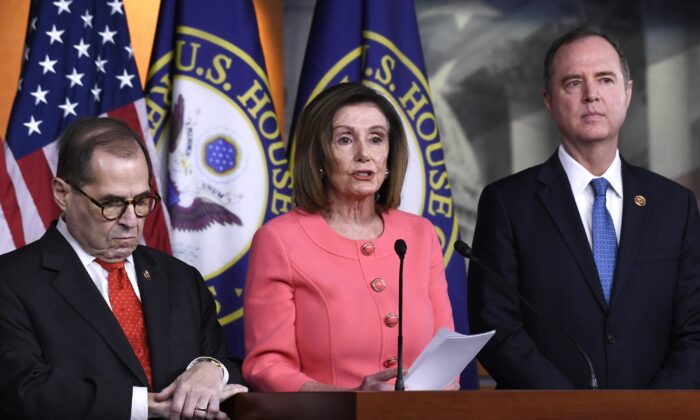 Impeachment Case Against President Trump Handed Off to Senate

Senate Majority Mitch McConnell (R-Ky.) said on the Senate floor as the articles were transmitted on Wednesday night: “Mr. President, I have been directed by the House of Representatives to inform the Senate. The House has passed H Res 798, a resolution appointing and authorizing managers for the impeachment trial of Donald John Trump, president of the United States.”

It came hours after Pelosi named two House chairmen who led the impeachment inquiry as prosecutors for the Senate trial. They are Intelligence Committee Chairman Adam Schiff (D-Calif.), who led the probe, and Judiciary Chair Rep. Jerrold Nadler (D-N.Y.), whose committee approved the impeachment articles.

Nadler called the House to vote on the managers just hours after they were named by the speaker. A 10-minute debate ensued between the GOP and Democrats on the floor, with Nadler again arguing that a “fair trial” in the Senate “must include additional documents and relevant witnesses.” Rep. Doug Collins (R-Ga.), the ranking Judiciary Committee Republican, argued that Democrats didn’t hold a “fair hearing in the House” and said the “president wasn’t allowed” to present counter-arguments and bring in fact witnesses.

The House voted to send up two articles that allege Trump abused his power and obstructed Congress, which is the last major action the lower chamber can take before the Senate takes over. After that, the managers will walk with the articles over the Senate building.

“Today is an important day,” said Pelosi in a news conference. “This is about the Constitution of the United States.”‘

Senators have said they expect to be sworn in as jurors this week, but Senate Majority Leader Mitch McConnell (R-Ky.) has told reporters that the trial likely won’t start until next week, possibly Tuesday.

The House voted Dec. 18, 2019 to impeach Trump—in a party-line vote—but Pelosi announced that her caucus would place a hold on sending the articles of impeachment, saying that she would like to see how the Senate votes on its trial. Senate Minority Leader Chuck Schumer (D-N.Y.) and Pelosi have both called for witnesses, including former Trump adviser John Bolton, to be subpoenaed in the Senate trial, but McConnell has insisted on holding a trial within the parameters of the rules that were used during the impeachment efforts against then-President Bill Clinton in the late 1990s.

Ahead of the vote, McConnell on Wednesday again faulted the Democrats for rushing their case against Trump. “These things take time,” he said on the Senate floor. Democrats have disputed this claim, saying they need to move with urgency ahead of the 2020 election.

In his speech, McConnell laid out his case for acquitting Trump. “Speaker Pelosi and the House have taken our nation down a dangerous road. If the Senate blesses this unprecedented and dangerous House process by agreeing that an incomplete case and subjective basis are enough to impeach a president, we will almost guarantee the impeachment of every future president,” McConnell said.

The Democrats have alleged that Trump abused his office and blocked a congressional investigation in his dealings with Ukraine last year. Trump, they claimed, withheld millions of dollars in security aid to Kyiv in exchange for investigations into a political rival, former Vice President Joe Biden, and his son, Hunter Biden. Trump and Ukrainian officials have denied the charges.

The White House and Republican allies said the inquiry is a continuation of a “witch hunt” that was initiated during then-special counsel Robert Mueller’s investigation into whether Trump’s campaign colluded with Russia during the 2016 election, which found no evidence of such a crime. Republicans have also claimed Democrats are trying to undo the results of the 2016 election.

But on Wednesday, Democrats again argued there was overwhelming evidence Trump abused his office while continuing to push for the Senate to compel more testimony from key witnesses.

The White House had critical words after the House team was announced by the speaker.

“The naming of these managers does not change a single thing,” White House press secretary Stephanie Grisham said in a statement after Pelosi’s announcement. “President Trump has done nothing wrong. He looks forward to having the due process rights in the Senate.”