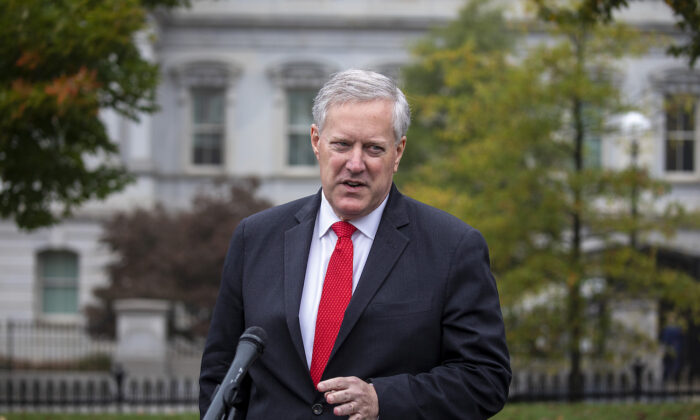 The House of Representatives late Tuesday voted to hold former White House chief of staff Mark Meadows in contempt of Congress after he ceased to cooperate with a congressional subpoena linked to the Jan. 6 breach of the Capitol building.

It marks the first time the chamber has voted to hold a former member in contempt since the 1830s. Meadows, a Republican, served as a U.S. House representative for North Carolina’s 11th congressional district prior to joining the Trump administration.

The vote was 222-208 largely on party lines in the Democrat-majority chamber. Reps. Liz Cheney (R-Wyo.) and Adam Kinzinger (R-Ill.) were two Republicans who sided with Democrats in voting in favor of the measure that recommends the Department of Justice to pursue criminal contempt charges against Meadows.

A conviction on the charge carries up to a year in prison.

The vote comes a day after the House select committee investigating the Jan. 6 Capitol breach voted 9-0 recommending that Meadows be held in contempt of Congress.

It is the second time the House has targeted a witness for defying a subpoena by the Jan. 6 House special committee. Former Trump adviser and campaign manager Steve Bannon was held in contempt of Congress in October and pleaded not guilty to the criminal charges after he refused to comply with a subpoena from the Jan. 6 committee. At the time, nine House Republicans voted in favor of the measure to hold him in contempt.

Meadows had turned over documents and negotiated for two months with the Jan. 6 committee about an interview, and had planned to appear voluntarily to answer questions about non-privileged matters, before he decided last week he would not appear for a deposition at the committee’s request.

He also sued the committee, arguing it did not have the authority to compel him to talk. The lawsuit asks a judge to invalidate two subpoenas that he says are “overly broad and unduly burdensome.”

Meadows had taken offense to the select committee issuing subpoenas for information from third parties, as well as to how Rep. Bennie Thompson (D-Miss.), the panel’s chairman, recently said that one asserting their Fifth Amendment rights was akin to an admission of guilt.

“As a result of careful and deliberate consideration of these factors, we now must decline the opportunity to appear voluntarily for a deposition,” Meadow’s attorney, George Terwilliger III, wrote in the letter.

Before the vote, Terwilliger defended his client in a statement, saying that Meadows had provided the committee with documents and argued Meadows should not be compelled to appear for an interview.

“He has maintained consistently that as a former chief of staff he cannot be compelled to appear for questioning and that he as a witness is not licensed to waive executive privilege claimed by the former president,” Terwilliger said.

“The Select Committee’s true intentions in dealing with Mr. Meadows have been revealed when it accuses him of contempt citing the very documents his cooperation has produced,” he added.

Republicans on Tuesday called the action against Meadows a distraction from the House’s work, with Rep. Jim Jordan (R-Ohio) praising Meadows: “Make no mistake, when Democrats vote in favor of this resolution, it is a vote to put a good man in prison.”

Trump also defended Meadows in an interview, saying: “I think Mark should do what’s right. He’s an honorable man. He shouldn’t be put through this.”