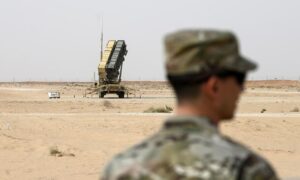 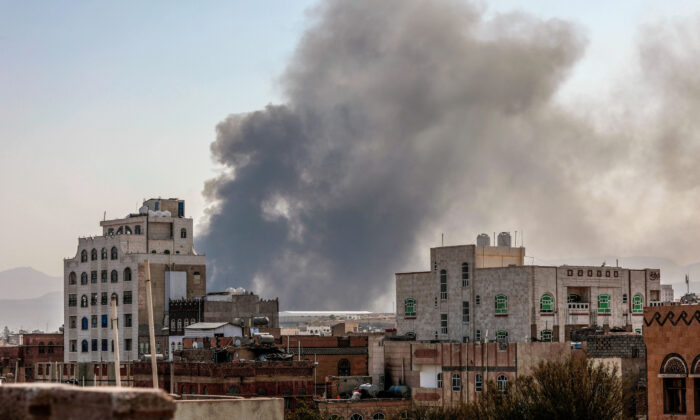 House Votes to End Support for Long Entanglement in Yemen

The U.S. House of Representatives has approved legislation that would end American support for the Saudi Arabia-led coalition in the Yemen conflict—what’s been described as a proxy war between the Saudis and Iranians, resulting in more than 230,000 deaths and a resurgence of al-Qaeda in the region.

The House vote occurred on Sept. 23 on an amendment to the 2022 National Defense Authorization Act (NDAA). The bipartisan provision was approved narrowly by a vote of 219-207, with 11 Republicans joining the Democrats, and will now head to the Senate for consideration.

The NDAA’s inclusion of this amendment would terminate U.S. logistical support, and the transfer of spare parts to Saudi warplanes conducting aerial strikes, according to the bill’s sponsor, Rep. Ro Khanna (D-Calif.)

“It would also enshrine into law the Biden Administration’s decision to end intelligence sharing that enable offensive strikes and end any U.S. effort to command, coordinate, participate in the movement of, or accompany Saudi-led coalition forces in the war,” Khanna said in a statement.

While some have celebrated the passage of the amendment, other experts say that ending support for the Saudis will empower Iran in the region.

“Consistent with its regional strategy, Iran seeks to establish a Hezbollah-styled proxy relationship with the Houthis, who are perched next to the Red Sea and on Saudi Arabia’s southern border,” the publication Foreign Policy said in March.

The conflict in Yemen has been described as a proxy war between Saudi Arabia and Iran. The Saudis have supported an Arab coalition led by former Yemen president Abdrabbuh Mansur Hadi, who was ousted during the conflict after a brief reign, while the Iranians have backed the Houthis, a political faction of Yemeni Shi’ites—Shi’ites being the dominant religious group in Iran.

The U.S. government has had a long and complicated history with all parties involved.

U.S. officials backed the Zaidi Shi’ite President Abdullah Saleh, and former President George W. Bush upped that support following 9/11—sending the CIA and special operations forces there to set up a base, train local forces, and track and kill members of al-Qaeda in the Arabian Peninsula (AQAP).

As the U.S. wars escalated in the 2000s, the Shi’ite Houthis increasingly resented the relationship between their president and the Americans, beginning to rebel. During this time, AQAP in the region grew as well.

The Obama administration changed its Yemen policy when the Arab Spring revolutions began in 2011, supporting calls for the Shi’ite Saleh to step down. In 2012, then-Secretary of State Hillary Clinton declared Saleh’s former vice president, Hadi, the new leader after an infamous election in which Hadi was the only candidate on the ballot. Clinton said the election was “another important step forward in their democratic transition process.”

But instead of retiring, the deposed president Saleh joined his fellow Shi’ites, the Houthis—sparking what would become a full-fledged civil war. By 2014, the Saleh-Houthis alliance recaptured power, marching into Yemen’s capital and causing Hadi to flee to Saudi Arabia.

At this point, the Obama administration changed course again, backing the Houthis for counterterrorism purposes.

“American officials are communicating with Houthi fighters, largely through intermediaries … to promote a stable political transition as the Houthis gain more power and to ensure Washington can continue its campaign of drone strikes against leaders of the group al Qaeda in the Arabian Peninsula, officials said,” the Wall Street Journal reported at the time.

Meanwhile, Obama was negotiating with Iran over a nuclear arms deal.

That led to him flip-flopping yet again in 2015. Then-National Security Council spokesperson Bernadette Meehan announced in March 2015 that the United States would start providing logistical and intelligence support to Saudi-led military operations.

According to reports from the time, Obama backing the Saudis in Yemen was designed to “placate the Saudis,” who were furious about the Iran deal.

“Among other reasons, the White House needed to placate the Saudis as the administration completed a nuclear deal with Iran, Saudi Arabia’s archenemy,” The New York Times reported in March 2016. “That fact alone eclipsed concerns among many of the president’s advisers that the Saudi-led offensive would be long, bloody, and indecisive.”

With the Houthis already entrenched in Yemen, national security officials conceded at the time that Obama’s newly launched campaign would likely be unsuccessful in putting Hadi back in power—though it would go on to kill thousands.

“The Obama administration is skeptical the airstrikes will reverse the Houthi gains,” the Wall Street Journal reported in April 2015. “Worried by the risk of more direct intervention by Iran, U.S. officials say they are urging the Saudis to set their sights more narrowly on halting rebel advances and reaching what amounts to a battlefield stalemate that leads all sides to the negotiating table.”

“I don’t currently know the specific goals and objectives of the Saudi campaign, and I would have to know that to be able to assess the likelihood of success,” current Defense Secretary Lloyd Austin, then head of U.S. Central Command, told the Senate Armed Services Committee at the time.

Former President Donald Trump continued Obama’s campaign. Trump described his thought process in July 2019, when he spoke about a trip he made to the Pentagon upon taking office.

“We were at the bottom of this incredible room. And I said, ‘This is the greatest room I’ve ever seen.’ I saw more computer boards than I think that they make today. And every part of the Middle East, and other places that was under attack, was under attack because of Iran,” Trump said at the time.

But despite Trump and President Joe Biden’s continued support of the Saudis, the Obama administration officials were correct in their assessments from 2015—that the Houthis wouldn’t be defeated. Today, the Houthis control much of northwest Yemen, and have consolidated power in the capital city.

Some national security experts point to Iran’s backing of the Houthis as the reason for their success in Yemen. But the extent to which Iran is backing the Houthis in the midst of its economic and fiscal crisis is unclear.

Meehan said in April 2015 that the administration’s assessment is that “Iran does not exert command and control over the Houthis in Yemen,” while Foreign Policy denied a Tehran-Houthis connection in 2017.

“The Houthis are not Hezbollah and, despite their publicly expressed sympathies for the Islamic Republic, have not developed a similarly tight relationship with Tehran,” Middle East experts Joost Hiltermann and April Longley Alley wrote for Foreign Policy. “Yet the combined efforts of Washington and its Gulf allies could still drive the Houthis into Tehran’s arms.”

Previous allegations of Iran arming the Houthis have been debunked by Wikileaks disclosures. For instance, a cable from the U.S. Embassy in Yemen in 2009 debunked a claim by Yemen’s then-government that Iranian arms headed to the Houthis had been intercepted.

“The ROYG [the government that was fighting the Houthis at the time] has failed to substantiate its extravagant, public claims that an Iranian ship seized in the Red Sea off its coast on Oct. 25 was carrying Iranian military trainers, weapons and explosives destined for the Houthis,” the intercepted State Department cable said. “In fact, sensitive reporting (RefC) suggests that the ship was carrying no weapons at all.”

Later, former U.N, Ambassador Nikki Haley claimed that a rocket fired from Yemen into Saudi Arabia had been supplied by Iran, but investigative reporting cast doubt on that allegation. Citing the industry publication Jane’s Defence Weekly, reporter Gweynne Dyer said the rocket fired from Yemen didn’t match the ones made by countries such as Iran and North Korea.

“Both Iran and North Korea have displayed Scud derivatives with shuttlecock-shaped warheads, but none of these match the Yemeni version,” Dyer wrote.

In recent years, there have been further reports of Iran sending arms to the Houthis. Few, if any, deny that there is a Tehran–Houthis connection today. It would be hard to do so, given Iran declared the Houthis to be Yemen’s official government in 2019.

But with Yemen under blockade, any aid provided by Iran hasn’t matched the billions of dollars worth of F-15s, drones, and other advanced technology the United States has provided to the Saudis, according to antiwar.com editorial director Scott Horton.

“The limited amount of support Iran has given to the Houthis over the course of the war, include radio equipment, training and supposedly a 3D printer and schematics for building drones,” Horton wrote in his book “Enough Already: Time to End the War on Terrorism.”

But by backing the Saudis, the United States has sided with al-Qaeda, according to numerous reports and national security experts.

“In recent weeks, the Qaeda affiliate in Yemen has allied with armed tribes to fight Iranian-backed Houthi rebels, putting that alliance on the same side of the country’s civil war as the United States and Saudi Arabia,” the Obama-friendly New York Times wrote in June 2015—fueling claims Trump made that year on the campaign trail that Obama and Clinton sided with terrorists.

“Elements of the U.S. military are clearly aware that much of what the U.S. is doing in Yemen is aiding AQAP and there is much angst about that,” Michael Horton, a fellow at the Jamestown Foundation, told The Associated Press in 2018.

Millions of Yemen civilians have been caught in the middle of the Iran/Saudi proxy war, including hundreds of thousands who have died from the conflict.

Estimates have put the number of dead Yemenis from the conflict at more than 230,000, with the United Nations declaring the matter a humanitarian crisis. The U.N. issued a report earlier this year, projecting that at least 400,000 children might die this year from starvation due to the conflict.

On the campaign trail, Biden promised to end support to the Saudis, citing the murder of Washington Post columnist Jamal Khashoggi—allegedly approved by Saudi Crown Prince Mohammed bin Salman. In February, Biden announced that his administration would halt “offensive” aid to the Saudis.

However, the Biden-friendly Vox reported in April that Americans are still servicing the Saudi air force—a crucial element of the country being able to maintain its blockade on Yemen. The U.S. government also approved a $500 million helicopter maintenance deal for the Saudis last week.

Skeptics have claimed that the United States’ continued involvement is fueled by military contractors’ desire to continue selling arms to the Saudis. CNN’s Wolf Blitzer reported there were such concerns in a December 2018 interview with Sen. Rand Paul (R-Ky.), who supports the effort to cease America’s involvement in the civil war.

“We are refueling the Saudi bombers that are dropping the bombs,” Paul said. “It is said that thousands of civilians have died in Yemen because of this.”

“So, for you, this is a moral issue,” Blitzer responded. “Because you know, there’s a lot of jobs at stake. Certainly, if a lot of these defense contractors stop selling war planes, other sophisticated equipment to Saudi Arabia, there’s going to be a significant loss of jobs, of revenue here in the United States.

“That’s secondary from your standpoint?”

Whether America has legitimate national security interests in the Yemen civil war, the Sept. 23 vote by Congress suggests that lawmakers want a greater say in the debate. Groups such as the bipartisan Quincy Institute for Responsible Statecraft applaud these efforts, saying that Congress is more reflective of American opinion than the executive branch.

“The passage of [t]his bill on Saudi Arabia’s National Day may drive home the fact that many Americans are tired of successive administrations bowing to Saudi preferences over those of the U.S. public,” the Quincy Institute wrote on Sept. 23.