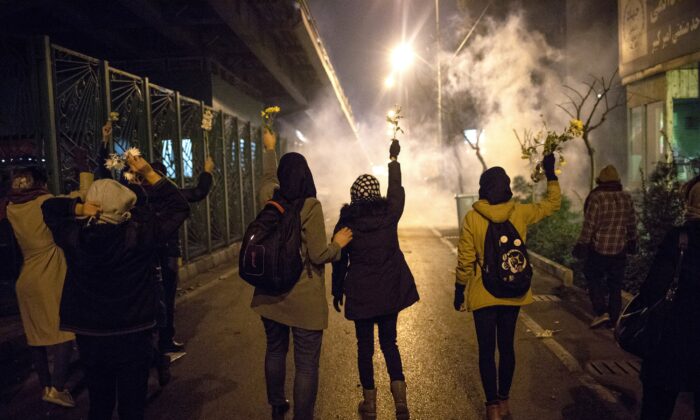 Protesters hold flowers to remember victims of a Ukrainian airplane shot down by an Iranian missile as tear gas fired by police rises at a demonstration in front of Amir Kabir University in Tehran on Jan. 11, 2020, (AP Photo)
Trump Presidency

In a party-line vote, the House of Representatives voted to advance two resolutions, blocking a resolution that voiced support for Iranians protesting against recent actions by their government.

The vote to advance the two resolutions, which dealt with protecting older workers against discrimination and student loan forgiveness, took place on Tuesday afternoon.

Shortly before the vote, Republicans announced that a vote against advancing the resolutions would trigger a vote on the resolution voicing support for the Iranian protesters, introduced by House Minority Leader Kevin McCarthy (R-Calif).

He then had the text of the amendment entered into the record.

McCarthy then stood to ask representatives to support his resolution, saying that it “sends a strong message that the United States stands with the Iranian people.”

The House soon voted 226–191 to advance the previous question.

McCarthy and other Republicans criticized Democrats for voting to advance the resolutions, issuing a statement saying, “Democrats just blocked a vote on a resolution supporting the Iranian protesters.”

What a disappointment—Democrats just blocked a vote on a resolution supporting the Iranian protestors.

This is not the time for partisan politics. This should be a time for the U.S. Congress to speak with one voice to condemn an Iranian regime that kills its own people.

But Rep. Mark DeSaulnier (D-Calif.) said before the vote for the other resolutions that it wasn’t a vote against the Iran resolution.

“If I could take a moment to respond to the comments by my friend from California. We know the government of Iran admitted mistakenly shooting [down] the Ukrainian airlines flight. It was a tragedy, and tragedies led to tragedy. The people of Iran stood up and demanded accountability and are standing up from their government today. This Congress supports those who demand transparency and fighting for their rights. That’s why the concurrent resolution we passed last week reaffirmed that it is in our national interest to support the people of Iran and other countries who demand [the] end of corruption in violation of basic human rights,” he told lawmakers.

“As of this morning, the Foreign Affairs Committee is examining our policy with Iran. While the Foreign Affairs Committee is hearing from experts on Iran, the house is taking action to protect students and protect Americans from discrimination in the workplace, and that’s what this rule is about. Make no mistake, defeating the previous question is not about the McCarthy resolution but a vote to hand over control of the house floor to the minority. Vote yes on the previous question. And so we may proceed to these critical pieces of legislation without delay.”