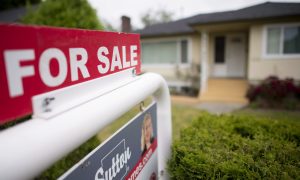 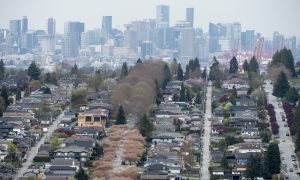 Talk of Housing Bubble in Canada Distorted by Toronto, Vancouver
0 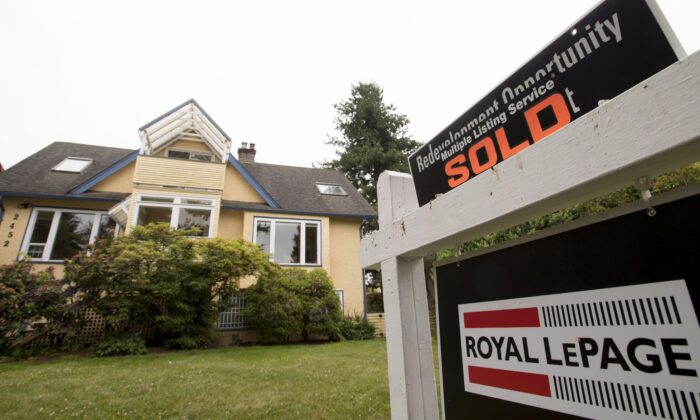 A real estate sign outside a home in Vancouver on June 12, 2018. Housing assessments in British Columbia show the real estate market continues to see signs of moderation in the Lower Mainland while stabilizing on Vancouver Island and other parts of the province. (The Canadian Press/Jonathan Hayward)
Canada

House Values Drop 11 Percent in Vancouver, Stabilize or Rise Elsewhere in BC

VANCOUVER—Housing assessments are in the mail for nearly two million homeowners in British Columbia, but those in Vancouver may have already searched their properties online to learn that values have fallen dramatically.

“It’s an annual rite of passage that on Jan. 1, you say ‘Happy New Year’ and then you immediately check your property assessment and then your neighbour’s,” joked Andy Yan, director of Simon Fraser University’s City Program.

The figures released Thursday by BC Assessment show the typical value of a single-family home in Vancouver has dropped 11 percent, from $1.76 million to $1.57 million, as of July 1, 2019.

The decline is more dramatic in the costly University Endowment Lands on the city’s west side, where average single-family home values fell 16 percent from $5.9 million to $4.95 million.

Vancouver’s housing prices saw large gains from 2015 to 2017 that were unrelated to local incomes, prompting a flurry of intervention by all three levels of government. The current downturn reflects the ongoing stabilization of the market, said Yan.

“This is part of a really important conversation here, which is really, how precarious was the market? Is it realistic to expect 15, 20 per cent increases per year? How much of this is really meant to tap on the brakes before the vehicle breaks down on you?”

Federal measures including the mortgage stress test and more rigorous identity and income verification have had an impact, along with new taxes imposed by the provincial and Vancouver governments, he said.

The province levied a 15 percent tax on foreign buyers in Metro Vancouver in 2016 that recently rose to 20 percent and expanded to other areas including Greater Victoria and the Fraser Valley.

Yan also said China has made it more difficult to move money out of the country, potentially reducing the flow of foreign capital to B.C.

The new assessments may ground homeowners to a more realistic understanding of their actual wealth as opposed to their wealth on paper, he said.

“Really, are you as rich as you think you are?” he asked.

The top end of the market is underperforming the most, suggesting provincial measures are having the most impact, said Tom Davidoff, the director of the University of British Columbia’s Centre for Urban Economics and Real Estate.

Those measures include the foreign-buyers tax, a speculation tax on empty homes and a school tax on properties worth more than $3 million, he said.

Davidoff said the condominium market is one to watch over the next couple years as tens of thousands of new units are set to be completed.

“I’ve been surprised at how resilient condos have been given that number of completions,” he said.

Elsewhere in B.C., housing values in the resort community of Whistler and nearby Pemberton rose five percent, while Vancouver Island saw modest reductions and some notable gains.

Yan suggested southern Vancouver Island may be experiencing a ripple effect of people cashing out of Vancouver and moving across the Georgia Strait.

At the same time, values of single-family properties in Terrace and Kitimat in northern B.C., where the massive LNG Canada project is being built, rose 20 and 41 percent respectively.

B.C.’s Housing Minister Selina Robinson said she was encouraged by the assessment figures.

“For the second year in a row, we see only modest changes in the value of both single-family and strata homes in most regions, particularly in the Lower Mainland and on Vancouver Island,” she said in a statement.

“This is a positive sign that our government’s efforts to make housing more affordable for more British Columbians are having a real impact.”