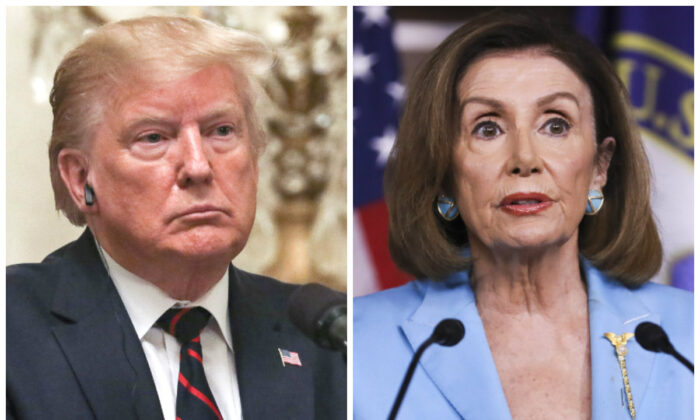 House to Vote This Week on Impeachment Inquiry, Says Pelosi

The House is slated to vote this week on the impeachment inquiry into President Donald Trump, top Democrats have said.

Speaker Nancy Pelosi (D-Calif.) said Monday that “we will bring a resolution to the Floor that affirms the ongoing, existing investigation that is currently being conducted by our committees as part of this impeachment inquiry, including all requests for documents, subpoenas for records and testimony, and any other investigative steps previously taken or to be taken as part of this investigation.”

Rep. Jim McGovern (D-Mass.), the chairman of the House Rules Committee, said on Monday that he will introduce a resolution to “ensure transparency” and “provide a clear path forward” in the inquiry.

According to the House Rules Committee’s website, a meeting will be held Wednesday “directing certain committees to continue their ongoing investigations as part of the existing House of Representatives inquiry into whether sufficient grounds exist for the House of Representatives to exercise its Constitutional power to impeach Donald John Trump, President of the United States of America, and for other purposes.”

McGovern, meanwhile, said that he plans on introducing it on Tuesday, according to a statement, as reported by CBS News.

It will be the first, formal vote on the impeachment process after House Speaker Nancy Pelosi (D-Calif.) announced the inquiry in September.

Republicans and the Trump administration have called for the House Democrats to hold a vote on the inquiry.

“As committees continue to gather evidence and prepare to present their findings, I will be introducing a resolution to ensure transparency and provide a clear path forward,” McGovern said in a statement. “This is the right thing to do for the institution and the American people.”

At the same time, Republicans have criticized the way in which Democrats have conducted the investigation, saying they are being held in secret while leaking information about them to the media. Last week, a coalition of GOP lawmakers entered a closed-door meeting that was being held by House Intelligence Chairman Adam Schiff (D-Calif.).

“We are taking this step to eliminate any doubt as to whether the Trump Administration may withhold documents, prevent witness testimony, disregard duly authorized subpoenas, or continue obstructing the House of Representatives,” said Pelosi in the statement.