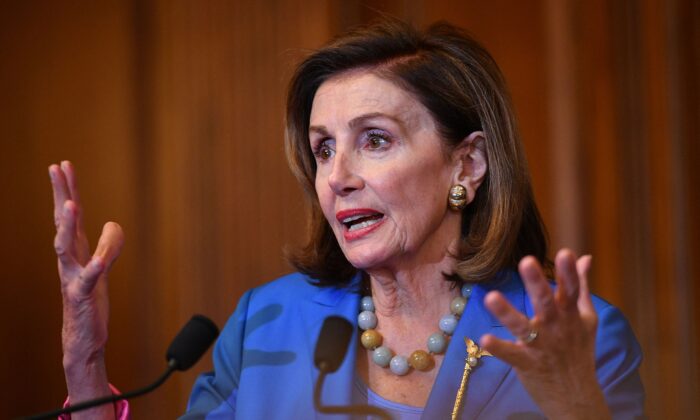 House Speaker Nancy Pelosi (D-Calif.) speaks before signing a bill to fund the government avoiding a federal shutdown at the U.S. Capitol in Washington on Sept. 30, 2021. (Mandel Ngan/AFP via Getty Images)
Congress

Friday morning, Speaker of the House Nancy Pelosi (D-Calif.) told reporters that the House would vote on the bipartisan $1.2 trillion infrastructure bill during its Friday session. This vote comes as the gap between progressives and moderates continues to widen.

Initially, the House was set to vote on the infrastructure bill, crafted by Senate Republicans and Democrats, on Monday. However, divisions within the party forced Pelosi to delay that vote.

Since early August, moderates and progressives in the House have been playing a game of political brinksmanship with the infrastructure bill and the $3.5 trillion budget reconciliation bill. Both wings control more than enough votes to tank the other’s priorities.

Pelosi originally wanted to move the bills forward together as part of what Democratic leaders called a “two-track strategy.”

Nine moderates rejected this strategy in an August letter to Pelosi, saying that they would not vote for the budget bill unless it was de-linked from the infrastructure bill. The infrastructure bill, they said, was “a bipartisan victory for our nation,” and they opposed entangling the legislation with the more partisan budget bill.

Pelosi initially dismissed the rebellion as a kind of political “amateur hour.” However, these moderates refused to relent, forcing Pelosi to make an eleventh-hour agreement with them on the day of a vote to advance the budget bill to committees for drafting. Under the terms of the agreement, moderates would vote to advance the bill in exchange for a promise on a Sept. 27 vote on the infrastructure bill.

Monday, the deadline laid out in the agreement, came and passed without a vote. Pelosi delayed the vote to Thursday, but was unable to fulfill the promise because of continued threats from progressives.

Other progressives have shared this demand.

“It’s not the infrastructure bill THEN maybe the Build Back Better [reconciliation] package down the road. That wasn’t the deal. Progressives won’t back down. We’re fighting the people’s fight and we’re going to deliver the entire ‘Build Back Better’ agenda,” Rep. Pramila Jayapal (D-Wash.), who leads the progressive caucus, wrote on Twitter.

Asked whether the infrastructure bill could pass, Rep. Adriano Espaillat (D-N.Y.), deputy whip of the Congressional Progressive Caucus, said during a Sept. 29 appearance on MSNBC “Right now, it doesn’t look like it.”

Despite these challenges in the House, Pelosi and other Democratic leaders in the lower chamber have remained confident of the bill’s success.

“Failure is not an option,” said Hakeem Jeffries (D-N.Y.), chairman of the Democratic House Caucus.

Challenged on whether the bill would go to a vote Friday, Pelosi continued this confidence, snapping back “There will be a vote today.”

With Thursday’s delay, the vote on the infrastructure package has already been pushed back three times.

Rep. Josh Gottheimer (D-N.J.), co-chair of the bipartisan Problem Solvers Caucus (PSC), expressed frustration on Sept. 29 on CNN at how things are unfolding.

Still, he also expressed hope. “We’re going to get both done,” he insisted.

Such a bundling, Fitzpatrick said, is “a one-party solution” that should not be pursued.