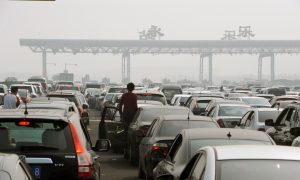 WASHINGTON—Faced with the prospect of a shutdown in highway and transit aid to states, the House is due to take up a bill to temporarily shore up funding for transportation programs for the 35th time since 2009.

The House bill on the schedule Wednesday would scrape together $8 billion to keep programs going through Dec. 18, but the Senate is moving in a different direction. Senate Republican leaders are trying to quickly cobble together a longer-term, more comprehensive bill that would pay for programs for possibly as long as six years.

Congress is under pressure to act quickly. Authority for transportation programs expires on July 31, which would eliminate the Transportation Department’s ability to process promised aid payments to states. But simply renewing the department’s authorization isn’t enough.

Without an infusion of cash, the balance in the federal Highway Trust Fund is forecast to drop below $4 billion — the minimum cushion needed to keep money to flowing to states without interruption — by the end of this month.

Senate Majority Leader Mitch McConnell, R-Ky., has said he wants a bill that will fund programs at least through next year’s election. The biggest holdup has been how to pay for a long-term bill since most lawmakers don’t want to raise federal gasoline taxes, the chief source of revenue for the programs.

In a closed-door GOP meeting on Tuesday, Senate Finance Committee Chairman Orrin Hatch, R-Utah, unveiled a list of revenue increases and spending cuts that could be used to fund a longer-term bill, but some of the proposals are controversial.

“I like the idea of a long-term bill, but there are a lot of different issues on the pay-fors,” said Sen. Susan Collins, R-Maine. She said she is unhappy with some of the proposals, but she declined to describe them.

Senate Minority Leader Harry Reid, D-Nev., said he understands the Republican offsets include changes in federal employee pensions. He said he would oppose anything along those lines, since Congress recently passed legislation in that area.

If the Senate can’t reach agreement on a longer bill, GOP leaders are likely to accept the House’s short-term extension bill.

Rep. Bill Shuster, R-Pa., chairman of the House transportation committee, said the five-month bill is necessary to buy more time to work on a longer measure.

“I believe we can get there, but we can’t get there in the next three weeks,” he said.

Lawmakers in both parties, as well as the White House, say a six-year bill would relieve states of the nearly constant uncertainty over whether they can count on federal aid. Some states have delayed or shelved construction projects this year rather than wait for Congress to settle on a solution.

Transportation Secretary Anthony Foxx has warned states that he will start slowing down payments on Aug. 1.

Federal fuel taxes and other fees bring in about $35 billion a year, while the government spends about $50 billion. The gas tax hasn’t been increased since 1993.

The Pamir Highway: A Road Adventure for Everyone

The biggest source of revenue to pay for the House bill — $3.2 billion — comes from an accounting maneuver involving security fees paid by airline passengers. Two years ago, Congress increased the fees and dedicated the additional money to pay for highway construction projects for 10 years.

The new bill would leave the fees unchanged, but continue dedicating the money to highways for an additional two years.

Much of the rest of the money would come from stepping up tax enforcement, an approach that drew scorn from some Democrats who complained that Republicans are leaning on tax agents for more revenue even as they continue to cut the IRS’s budget.