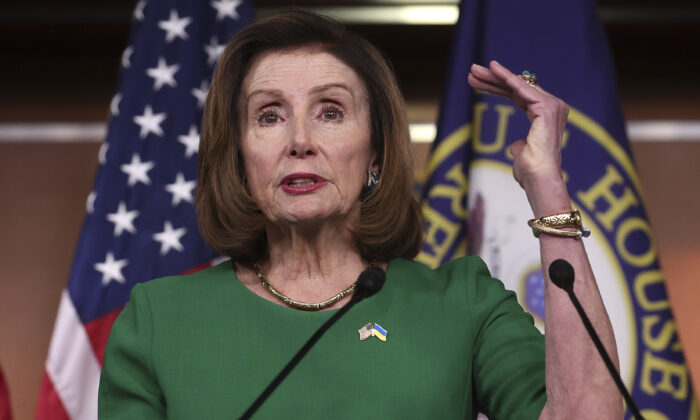 House Speaker Nancy Pelosi (D-Calif.) has invited at least three lawmakers to join her planned trip to Taiwan, according to some contacts familiar with the matter, NBC News reported.

Rep. Michael McCaul (R-Texas.), the top Republican on the House Foreign Affairs Committee, said in an interview at the U.S. Capitol that he and Committee Chairman Gregory Meeks (D-N.Y.) are on the list.

His remarks appeared to confirm Pelosi’s trip to the self-governing island, which the Chinese regime considers part of its territory, to be taken by force if necessary.

Both Pelosi’s office and the White House have declined to confirm the visit, citing security concerns.

Leslie Shedd, McCaul’s spokesperson informed the news outlet the congressman cannot make the trip because of a pre-arranged personal engagement, but that he supports Pelosi’s intention.

“Any member that wants to go, should,” McCaul said, noting that “it shows political deterrence to President Xi.”

“But she should also pay attention to the military, if it’s going to cause a blowback and escalate things,” the congressman warned.

Rep. Anna Eshoo (D-Calif.) told NBC she also was invited to join the proposed trip, but had to decline.

Pelosi’s proposed trip could loom over the call between President Joe Biden and Chinese Communist Party (CCP) head Xi Jinping scheduled for July 28, with Taiwan expected to be a key agenda item. The U.S.-Sino top leader call will be the fifth of its kind.

CCP leadership threatened “forceful measures” against the United States and Taiwan should Pelosi visit. Following the remarks, Biden publicly stated that Pelosi should not go to Taiwan as a matter of national security, in an apparent concession to the communist regime.

U.S.-based China affairs commentator Wang He told The Epoch Times on July 25, “President Biden said last Wednesday [July 20] that he would talk to Chinese leader Xi Jinping by end of this month. He doesn’t want to anger Beijing now, which is the reason he doesn’t support Pelosi’s trip.”

Yet, Trump-era Defense Secretary Mark Esper expressed doubt that Beijing would make any serious military move against the top congressional visit to the democratically ruled island.

“We should not be self-deterred, and we should not take all these declarations and proclamations from Beijing too seriously,” Esper said. “I mean, do we honestly think they’re going to start a war or do something because the speaker of the House of Representatives travels to Taipei?”

U.S. officials reportedly echoed his view but took into account the possibility that China might escalate provocative overflights of military aircraft in or near Taiwanese airspace and send naval patrols into the Taiwan Strait.

The Pentagon would deploy military forces and assets available in the Pacific region to provide overlapping rings of protection for Pelosi’s flight to Taiwan and any time spent on the ground there, according to U.S. officials speaking on the condition of anonymity to discuss sensitive security issues, AP reported.

U.S. Gen. Mark Milley, chairman of the Joint Chiefs of Staff, also asserted, “if there’s a decision made that Speaker Pelosi or anyone else is going to travel, and they asked for military support, we will do what is necessary to ensure a safe conduct of their visit.”