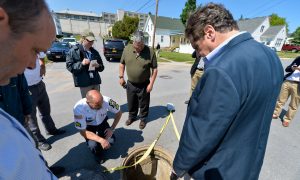 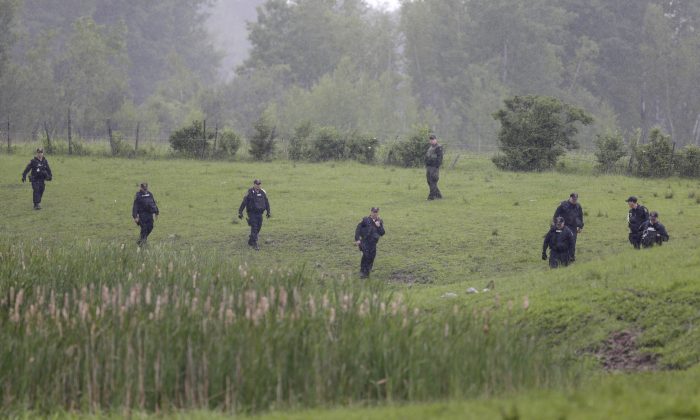 Law enforcement officers search for escaped prisoners near Essex, N.Y., Tuesday, June 9, 2015. State and federal law officers searching for two killers who used power tools to break out of a maximum-security prison poured into a small town 30 miles away Tuesday after getting a report of a possible sighting. (AP/Seth Wenig)
Crime and Incidents

WILLSBORO, N.Y.—Police plan to resume searching homes located near the maximum-security prison in northern New York where two killers escaped using power tools, authorities said Wednesday as they renewed their plea for help from the public.

State Police said the fifth day of searching will entail going from house to house in Dannemora, where David Sweat and Richard Matt cut their way out of the Clinton Correctional Facility. The house searches aren’t the result of any new leads and law enforcement is retracing its steps made soon after the escape, troopers said.

“They’ll be doing a 100 percent sweep from the prison right out, see how that goes,” said David Favro, the sheriff for Clinton County, where the prison is located, about 20 miles from the Canadian border.

Law enforcement officials reiterated their plea for the public’s help in reporting anything unusual in the area since the prison break, which was discovered over the weekend.

“We don’t want them out searching the woods,” Favro said. “But if you’re sitting on your porch, get your binoculars out and see if you see something unusual.”

A search Tuesday in a rural town about 30 miles from the prison turned up no sign of the convicts. The search was prompted by reports of two men seen walking late Monday during a driving rainstorm along a road in Willsboro, near Lake Champlain.

Hundreds of law enforcement officers swept through the small Adirondack foothills town. Searchers walked shoulder to shoulder, wearing bulletproof vests and carrying sidearms as they went through hilly woods, fields and swamps, checking every home, garage, shed and outbuilding, then yelling, “Clear!” when there were no signs of the inmates.

By early evening, it appeared the sweep had come up empty, and there was no confirmation from police that the escaped convicts had been there. State Police said more than 400 corrections and other law enforcement officers were in the area and planned to go door to door, checking homes and seasonal camps.

Sweat, 34, and Matt, 48, cut through a steel wall, broke through bricks and crawled through a steam pipe before emerging through a manhole outside the prison grounds.

They were discovered missing early Saturday after stuffing their beds with clothes to fool guards on their rounds and leaving behind a taunting note: “Have a nice day.”

There was speculation that the inmates had arranged for someone to pick them up outside the prison and were long gone from the area, even in Canada or as far as Mexico.

The escape from the 3,000-inmate state prison has raised suspicions the men had help on the inside.

Investigators have been questioning prison workers and outside contractors to try to find out who may have supplied the power tools. Contractors have been doing extensive renovations at the 170-year-old prison, a hulking, fortress-like structure that looms over Dannemora’s main street.

A $100,000 reward has been posted for information leading to the men’ capture.

Sweat was convicted in the 2002 killing of a sheriff’s deputy and was doing life without parole. Matt was serving 25 years to life for kidnapping and dismembering his boss in 1997.