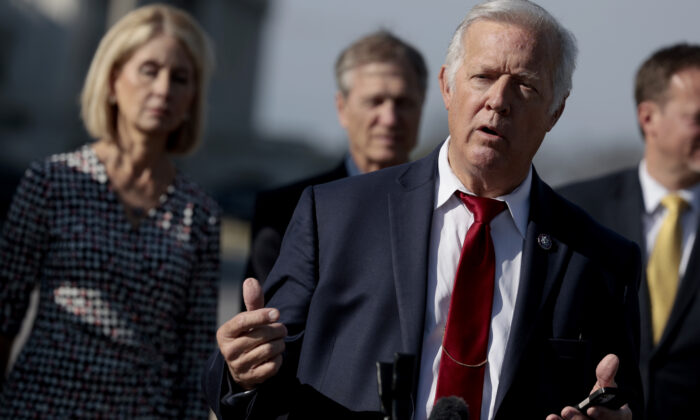 Rep. Randy Weber (R-Texas) speaks at a press conference, alongside members of the Second Amendment Caucus, outside the U.S. Capitol Building in Washington, on March 8, 2022. (Anna Moneymaker/Getty Images)
US-China Relations

Andrew Thornebrooke
Reporter
Andrew Thornebrooke is a reporter for The Epoch Times covering China-related issues with a focus on defense, military affairs, and national security. He holds a master's in military history from Norwich University.
View profile
Follow
and Steve Lance

House Republicans announced this week that they are working on new legislation that would increase punitive economic measures against China for its continued espionage efforts in the United States.

Rep. Randy Weber (R-Texas) said that the new Chinese espionage bill is intended to shore up what Republicans saw as weaknesses in the Biden administration’s China policies.

“It doesn’t take rocket science to figure it out that the Chinese are not our friends,” Weber said during a Sept. 8 interview with NTD, a sister media outlet of The Epoch Times.

“China has been stealing stuff from us for so long … [and] Biden will do nothing toward trying to rein them in.”

Weber noted that, despite the tough rhetoric on China, it is not the Chinese people who are attempting to undermine the United States, but the Chinese Communist Party (CCP), which currently rules China as a single-party state.

“China has always been a bad actor since the Communist Party took control,” Weber said.

“We [the GOP] don’t have any gripe with the Chinese people. We’ve got a lot of good Chinese folks living over here. It’s the Chinese Communist Party that we have the gripe with.”

The remarks echoed similar comments by Rep. Michael McCaul (R-Texas) on Sept. 8 at a press conference, which aimed to outline the GOP’s China platform should the party regain a congressional majority after November’s midterm elections.

“[Biden] shut down the China Initiative that the Trump administration started,” McCaul said.

“Guess what? Espionage hasn’t gone away.”

The China Initiative was a Department of Justice (DOJ) anti-espionage program that sought to counter CCP efforts to steal research and technology.

The Biden administration terminated the program in February, citing concerns about racial discrimination against Chinese people. An internal DOJ investigation found no evidence of discrimination, but the department still ended the program to avoid what it termed a “harmful perception” of bias.

“What this bill does is put new sanctions on China [as punishment for that theft].”

Norman said that he became more involved with the issue of Chinese espionage some years ago after investigating the Confucius Institutes.

The Confucius Institutes, now named Centers for Language Exchange and Cooperation, are CCP-funded cultural outreach programs described by Beijing as “an important part of China’s overseas propaganda set-up” and are also believed to double as espionage centers for the regime abroad.

Though some 40 of the centers have been shut down across the United States, many still operate at American universities, and some universities replaced the institute with a differently named, but still CCP-funded, program.

“I got involved three or four years ago on the Confucius Institute, pointing out that this was just another way for China to steal our intellectual properties and do it on the dime of the American taxpayer,” Norman said.

“[This bill] prohibits universities from receiving grant money from the NSF, the National Science Foundation, that works with China. And [it] prevents companies from using our federal dollars to expand businesses in China.”

The details of the GOP’s proposed legislation to counter the CCP are still being worked out. Still, Norman said he is confident in the ability of the party to deliver and that the policies should have been brought forward long ago.

“[The CCP is] no friend of the United States,” Norman said. “This should have happened long ago.”