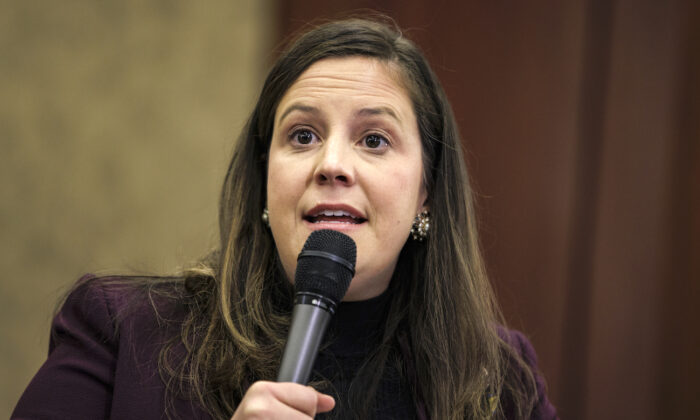 House Republicans Will Be ‘Pushing Back’ Against Jan. 6 Committee: Rep. Stefanik

Rep. Elise Stefanik (R-N.Y.) said that House Republicans would be “pushing back” against the Jan. 6 Committee in an effort to tell the American people how the committee’s efforts have been “unconstitutional and illegitimate.”

She said Republicans would be countering the messaging from the panel investigating the Jan. 6, 2021, breach of the U.S. Capitol amid a series of nine primetime public hearings over the next few weeks, starting with one on June 9 at 8 p.m. Washington time.

During the hearings, the panel will “present previously unseen material documenting January 6th, receive witness testimony, preview additional hearings, and provide the American people a summary of its findings about the coordinated, multi-step effort to overturn the results of the 2020 presidential election and prevent the transfer of power,” the committee said in a statement.

“We’re working very closely with President [Donald] Trump and his team, with [Republican] Leader Kevin McCarthy, with [Rep.] Jim Jordan, and really all of the House Republicans, we’ll be pushing back in a rapid response fashion,” Stefanik told Breitbart News.

“You will see us all over the airwaves, we’ll be setting the record straight, we’ll be telling the truth to the American people, sharing the facts, and also really pointing out how unprecedented and unconstitutional and illegitimate this committee is,” she said.

“We have lots of media bookings already set. I know that many of our members are going to shine in this moment. But similar to impeachment sham one, and really, impeachment sham two, just out there, every single day,” she said, equating the Jan. 6 panel to previous Democratic-led efforts to impeach former President Donald Trump on two separate occasions, which both resulted in Trump being acquitted.

In May 2021, Stefanik was voted House Republican Conference chair, the No. 3 GOP leadership position in the chamber, after Republicans ousted Rep. Liz Cheney (R-Wyo.) from the post. Cheney is a member of the Jan. 6 panel.

She said Pelosi’s office is “the only office that is off limits” from the Jan. 6 panel’s investigation and noted that Pelosi has refused to produce documents related to the security posture of the U.S. Capitol.

House Republicans have been demanding answers from Pelosi about why the U.S. Capitol didn’t have adequate security, even though the Capitol police chief had asked Pelosi’s office more than once to order in the National Guard ahead of Jan. 6, 2021—requests that were rejected or not followed up.

“There were concerns about security that were raised with Speaker Pelosi’s office. She was concerned about political optics, and the Capitol was left vulnerable on that day,” Stefanik said. “The American people deserve to know why Nancy Pelosi isn’t releasing those documents and they deserve to know full transparency.”

Stefanik previously accused the Jan. 6 panel of being a political weapon “used to cover up for Nancy Pelosi’s failures.”

The nine-member Jan. 6 panel has also been criticized for its apparent partisanship. The panel consists of seven Democrats and two Republicans—Rep. Adam Kinzinger (R-Ill.) and Cheney, both known for their strong opposition to Trump. Pelosi selected Kinzinger and Cheney after she refused to seat members picked by House Minority Leader Kevin McCarthy (R-Calif.).

Chairman Bennie Thompson (D-Miss.) told reporters previously that the upcoming hearings “will tell the story about what happened” on Jan. 6.

“We will use a combination of witnesses, exhibits, things that we have—to the tens of thousands of exhibits we’ve interviewed and looked at as well as the hundreds of witnesses we deposed or just talked to in general,” he said at the time. “It will give the public the benefit of what more than a year’s worth of investigation has borne to the committee.”

Thompson has said that the committee plans to release a report on its findings in early fall.