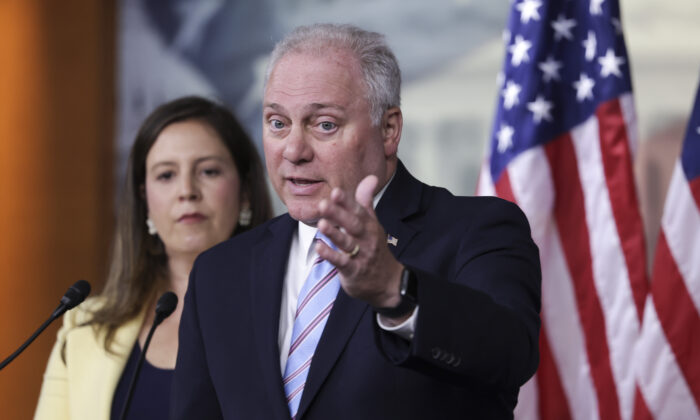 House GOP leaders have announced that they will vote against the Senate’s gun control bill, with House Republican Whip Steve Scalise (R-La.) saying he will whip voting against the measure.

Lauren Fine, Scalise’s spokesperson, told Fox News Digital on June 22 that the No. 2 House Republican will encourage his fellow Republicans to vote “no.”

“In an effort to slowly chip away at law-abiding citizens’ 2nd Amendment rights, this legislation takes the wrong approach in attempting to curb violent crimes,” Scalise wrote in a whip notice, according to the outlet.

Sens. Kevin Cramer (R-N.D.) and Pat Toomey (R-Pa.) did not cast a vote. However, Toomey issued a statement supporting the legislation.

The Senate is expected to vote on the legislation this week, before the senators depart for a two-week recess on June 27.

House GOP Leader Kevin McCarthy (R-Calif.) has also voiced his opposition to the bill, according to The Federalist.

“I will oppose the Senate bill because provisions in it would place additional unnecessary impediments and burdens on [a] law-abiding citizen’s right to own a firearm,” McCarthy said.

House GOP Conference Chair Elise Stefanik (R-N.Y.) issued a statement saying she will not vote for the Senate bill either.

“This bill contains unconstitutional gun control provisions and allows the implementation of red flag laws that take away due process rights,” Stefanik wrote. “It would restrict men and women who are able to serve in our military from purchasing a firearm and would strip the constitutional rights of gunowners by broadening the scope of punishment for even nonviolent misdemeanors.”

“As this blatant government overreach seeks to make gun owners second-class citizens, I will continue to stand up for the Constitution and push for solutions, including advocating for increased mental health resources across the country,” she concluded.

“Red flag laws permit the preemptive seizure of firearms from Americans without due process by allowing any person to report a gunowner to law enforcement and petition for the confiscation of that individual’s firearms, even before the gunowner has an opportunity to defend themselves,” the caucus said in a statement.

However, at least one House Republican has publicly declared his intention to support the Senate bill.

Rep. Tony Gonzales (R-Texas), who represents Uvalde, took to Twitter to explain why he is going to support the Senate legislation.

“I am a survivor of domestic abuse, my stepfather would come home drunk & beat on me and my mother,” Gonzales wrote. “One night he decided that wasn’t enough and shoved a shotgun in my mother’s mouth. I was 5 at the time and not strong enough to fend off the wolves. School was my sanctuary from the chaos at home.”

“As a Congressman it’s my duty to pass laws that never infringe on the Constitution while protecting the lives of the innocent. In the coming days I look forward to voting YES on the Bipartisan Safer Communities Act,” Gonzales concluded.

House Speaker Nancy Pelosi (D-Calif.), in a statement released on June 21, said she planned to “swiftly bring” the bill for a vote once it passes the Senate.

“Communities across the country will benefit from House Democrats’ proposals included in this package,” Pelosi stated.

Other House Republicans who have declared their opposition to the bill include Reps. Lauren Boebert (R-Colo.) and Mary Miller (R-Ill.).

During a press conference on June 22, Boebert criticized the GOP senators who had voted in favor of the bill.

“These red flag laws are unconstitutional and the provisions that would ensure our teachers are disarmed. That’s exactly the opposite of what we should be doing,” Boebert said.

“How sad is it that our Second Amendment is under siege by the very people who are elected, who are positioned to protect that right? Our Second Amendment was designed to keep us from tyranny, and these same people are the ones who are wanting to take that away,” she added.