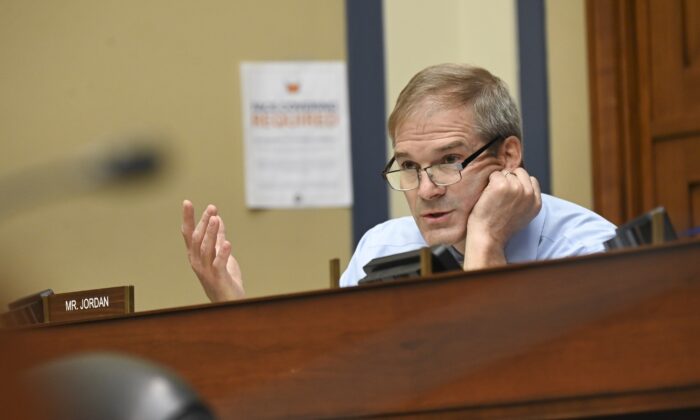 Ohio Rep. Jim Jordan, the top Republican on the House Judiciary Committee, on Tuesday introduced a resolution that would force key individuals to cooperate with an investigation into actions the Biden administration has taken to potentially crack down on parental protests.

If the resolution were adopted, the committee would issue subpoenas to Attorney General Merrick Garland, FBI Director Christopher Wray, Education Secretary Miguel Cardona, and National School Boards Association (NSBA) President Viola Garcia, requiring these individuals to provide information about the Biden administration’s reactions to a now-rescinded letter (pdf) that characterized disruptions at school board meetings as “a form of domestic terrorism.”

Specifically, the subpoenas seek “documents relating to Biden administration’s use of federal law enforcement, including counterterrorism tools, to target concerned parents at local school board meetings and to chill protected First Amendment activity.”

The move comes days after Jordan asked Rep. Jerry Nadler (D-N.Y.), the judiciary committee’s chairman, to issue subpoenas to investigate the matter. In his Dec. 2 message (pdf), Jordan told Nadler that the Republicans on the committee had sent several requests to the Biden administration and the NSBA for information, but they had received no responsive material to date.

Jordan pointed to an internal memo sent to NSBA members by Garcia, who was appointed by the Education Department to a federal advisory board following the controversy. The memo, which was dated to Oct. 12, included a timeline of the NSBA’s interaction with the White House.

According to the memo obtained and made public by Parents Defending Education, there had been at least one meeting with White House staff on Sept. 14, before the NSBA sent their letter to President Joe Biden on Sept. 29. Just five days later, on Oct. 4, the Justice Department issued a memo directing federal law enforcement agents to meet with state and local leaders to discuss strategies to address alleged threats of violence against school board members. On Oct. 22, the NSBA issued an apology for the letter.

Jordan also noted that on Oct. 20, 2021, the Deputy Assistant Director of the FBI’s Criminal Investigative Division sent an email to an internal mailing list. The email, according to Jordan, referenced Garland’s Oct. 4 memo and notified FBI personnel about a new “threat tag” created by the Counterterrorism and Criminal Divisions, and directed FBI personnel to apply this new threat tag to all “investigations and assessments of threats” relating to school boards.

“This information is scandalous and we have good reason to believe that the Biden Administration and the NSBA possess additional material that is necessary and important for our investigation,” Jordan argued. “We have requested documents and information from the Justice Department and its components, the Education Department, the FBI, and the NSBA. None of these entities have cooperated with our requests or have engaged with us in any constructive manner.”

In the aftermath of the “domestic terrorism” letter, 27 state school board associations have distanced themselves from NSBA, with 17 of them have terminated their membership, citing disagreements over the letter’s content. A calculation based on NSBA’s 2019 financial data suggests that the national federation could lose over $1.1 million in funding due to the state chapters’ departure.