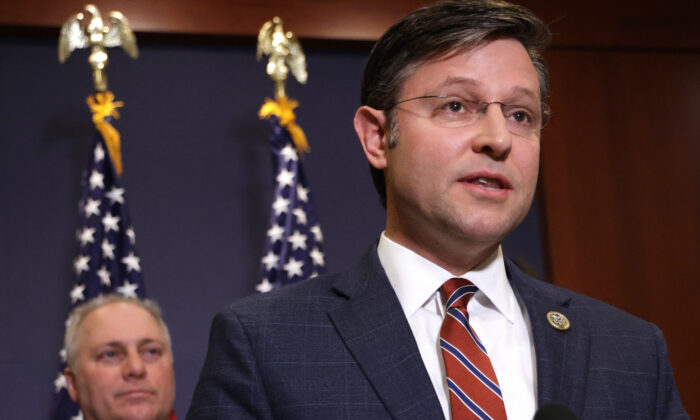 Republicans in the House of Representatives on May 3 introduced legislation that would ax funding for the newly announced “disinformation governance board.”

“The government has no role in determining what constitutes truth or acceptable speech, and this dystopian, unconstitutional board must be dissolved,” Rep. Mike Johnson (R-La.), who led the 50 Republicans backing the bill, said in a statement.

If President Joe Biden won’t dissolve the board, “then we will,” he added.

The legislation states that no federal funds can be authorized to establish or fund the activities of the board.

Department of Homeland Security (DHS) chief Alejandro Mayorkas revealed the initiative during a congressional hearing in late April for the first time.

“We have just established a disinformation governance board in the Department of Homeland Security to more effectively combat this threat, not only to election security but to our homeland security,” Mayorkas told members of Congress in Washington.

The DHS later called the board “an internal working group” that aims to identify disinformation that threatens America while protecting Americans’ rights.

“The working group also seeks to coordinate the Department’s engagements on this subject with other federal agencies and a diverse range of external stakeholders. The working group does not have any operational authority or capability,” the department said in a May 2 fact sheet.

Nina Jankowicz, until recently a fellow at the Woodrow Wilson Center for International Scholars, was tapped to head the new group.

Jankowicz said she’d been working on the initiative for two months.

It remains unclear who decided to form the board and when exactly it was formed.

The Epoch Times has filed Freedom of Information Act requests seeking more information on its origins.

Republicans have criticized the effort as overbroad, triggering the new legislation and plans from Sen. Josh Hawley (R-Mo.) to introduce a similar bill in the upper chamber this week.

Taxpayer money should not go toward “a federal mandate for the definition of ‘truth.'” Rep. Diana Harshbarger (R-Tenn.), one of the House bill’s co-sponsors, said in a statement, adding that the legislation was meant to “stop this bizarre and un-American program in its tracks.”

The bills would require support from Democrats, who control both chambers of Congress, to be approved.

Both Mayorkas and the White House have defended the board, including describing it as nonpartisan despite Jankowicz’s history of supporting Democrat presidential candidate Hillary Clinton.

Jankowicz also has a history of promoting dubious claims, including portions of the dossier compiled by ex-British spy Christopher Steele that was paid for in part by Clinton’s campaign.

Johnson’s office described Jankowicz as “a frequent purveyor of falsehoods” and noted the Biden administration has pushed unsubstantiated claims during its time in office, including the allegation that Mayorkas has effectively managed the flood of illegal immigrants entering the United States.