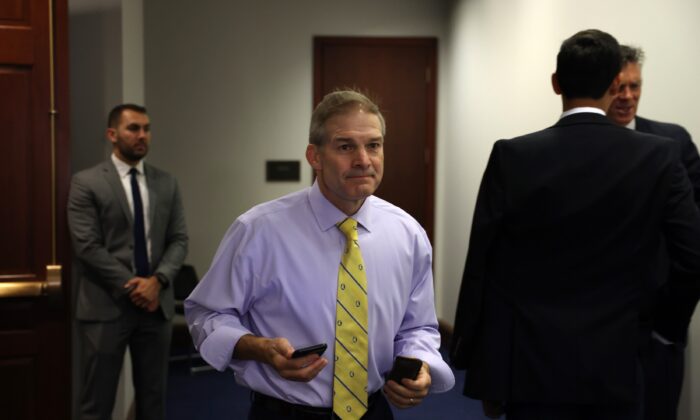 Two top Republicans in the U.S. House asked for answers from the White House about its role in the protests at the private residences of some conservative U.S. Supreme Court justices.

Rep. Jim Jordan (R-Ohio) and Rep. James Comer (R-Ky.) on Friday asked the White House in a letter to:

The two Republicans said they wrote the letter because some Democrats have tried to intimidate the Supreme Court.

“For several years, we have seen prominent Democrats attempt to intimidate and bully the U.S. Supreme Court so that it will be reluctant to strike down legal challenges to the left’s radical progressive agenda,” read the letter.

In a very rare circumstance, a draft Supreme Court opinion was leaked to a media outlet on May 2. The opinion appears to show that the justices are ready to overturn Roe v. Wade, a ruling in 1973 that de facto federalized pro-abortion rules and deprived some states of the right to be against abortions.

“When you lose that trust, especially in the institution that I’m in, it changes the institution fundamentally,” he said Friday during a conference in Dallas, Texas. “You begin to look over your shoulder. It’s like kind of an infidelity that you can explain it, but you can’t undo it.”

Thomas emphasized in early May that government institutions must not allow themselves to be strong-armed into delivering outcomes that people demand.

Progressive activists went to the Supreme Court plaza. They also protested at the private residences of some conservative justices and caused broad concerns about the safety of the justices.

However, the White House refused to deescalate the situation.

Outgoing White House press secretary Jen Psaki said “peaceful protest is not extreme” on May 5 when asked if she thought progressive activists’ protesting outside some of the justices’ houses went too far.

“I know that there’s an outrage right now, I guess, about protests that have been peaceful to date, and we certainly do continue to encourage that, outside judges’ homes, and that’s the president’s position,” he said in a statement via Psaki.