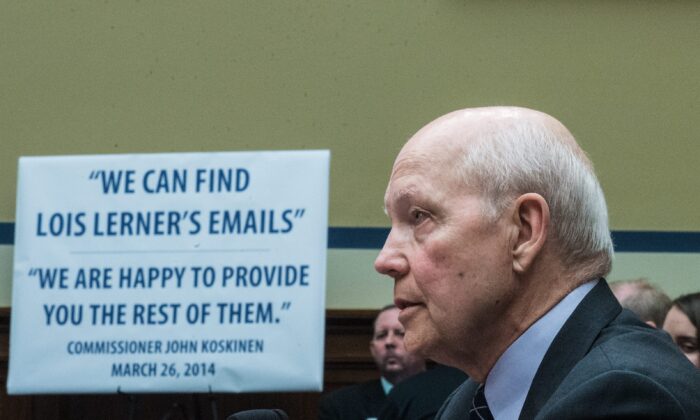 A bewildered civil liberties lawyer expressed frustration to Republican members on the House Ways and Means Committee on Sept. 29, asking why the IRS has time to harass evangelical Christian groups seeking tax exemptions but can’t prevent leaks of tax records.

“Why is it that the IRS has time to go after Christians Engaged, but they don’t have time to secure the files of taxpayers, so that they are not breached by foreign adversaries? Why is it not a priority to track the dollars of terrorist organizations, but it is a priority to find out what Christians Engaged was up to?” asked Jay Sekulow, chief counsel for the American Center for Law and Justice (ACLJ).

He was responding to a question from Rep. Ron Estes (R-Kan.) during a roundtable titled “Weaponization of the IRS: A Sordid History and the Need for Taxpayer Protections.” No Democratic members of the panel attended the roundtable.

Sekulow was referring to a recent leak of hundreds of tax documents for 15 of the nation’s wealthiest individuals to ProPublica, a liberal investigative advocacy group. The group stated that it didn’t know the identity of the source that provided the documents, but conceded that the source could be Russia, China, or another foreign adversary of the United States such as a terrorist group.

The roundtable was convened by Rep. Kevin Brady (R-Texas), the ranking Republican member of the Ways and Means panel, and Rep. Mike Kelly (R-Pa.), the top Republican on the panel’s oversight subcommittee.

The roundtable was prompted by President Joe Biden’s proposal to spend $80 billion to double the IRS workforce and grant the federal tax agency new authority to examine the financial records of any business or private individual whenever a transaction worth $600 or more is made into or out of their bank accounts. The agency currently has the authority it was given following the 9/11 terrorist attacks to examine bank transactions of $10,000 or more.

The Republicans argued the Biden proposal should be defeated because the IRS has a history of politically abusing its power, as illustrated by the ProPublica leak and the 2013 scandal under President Barack Obama in which the agency was found to have singled out conservative, Tea Party, and evangelical nonprofit applicants for extreme delays and unjustified denials during the 2010 and 2012 election campaigns.

The IRS admitted in a 2017 consent decree issued by a federal court that it had acted illegally in the Tea Party controversy and agreed to make management changes to prevent a recurrence. Sekulow repeatedly noted that, despite the consent decree, the IRS is again discriminating against applicants based on their viewpoints.

The IRS was also the center of controversy during the Clinton administration when it claimed conservative think tanks such as the Heritage Foundation and the Western Journalism Center were being harassed by the tax agency.

Also testifying during the roundtable was Bunni Pounds, president of Christians Engaged, a Texas-based nonprofit that encourages members to pray on a nonpartisan basis for elected leaders and to be informed on a biblical basis about public policy issues.

Christians Engaged was improperly denied exemption by the IRS in May because it allegedly “[engages] in prohibited political campaign intervention” and “[operates] for a substantial non-exempt private purpose and for the private interests of the [Republican] party,” according to Stephen K. Martin, the IRS director of Exempt Organization Rulings and Agreements.

Martin’s denial of Christians Engaged’s application and The Epoch Times’ reporting of it was followed by a flurry of negative national media coverage for the federal tax agency. Multiple members of Congress, who saw in it a repeat of the targeting scandal in 2013 under Martin’s predecessor, Lois Lerner, also spoke out against the initial decision.

Participants at the roundtable remarked that the denial had fueled opposition to Biden’s proposed expansion of the IRS by financial institutions concerned about added regulatory reporting burdens, and by civil liberties advocates and Republicans in Congress worried about further invasions of privacy.

Patterson told the roundtable that “the IRS did not offer any explanation apart from the denial letter … and the IRS was able to hold Christians Engaged’s application for at least a year, to 18 months. There’s not really a firm deadline that the IRS has to hold to in making these tax-exempt status determinations.”

She also noted that the denied organization has only 30 days to appeal an adverse IRS decision and even less time if the group has to find and retain a qualified tax attorney to handle the appeal.

The Biden IRS proposal, which is contained in the president’s $3.5 trillion “Build Back Better” spending program, was also denounced during a Sept. 28 hearing of the Senate Committee on Banking, Housing and Urban Affairs, when Sen. Cynthia Lummis (R-Wyo.) cross-examined Secretary of the Treasury Janet Yellen.

“Do you distrust the American people so much that you need to know when they bought a couch? Or a cow?” Lummis asked Yellen.

“There are obvious privacy concerns for all Americans here and this represents a dramatic new regulatory burden for community banks and credit unions in Wyoming and elsewhere. Banks will have to hire contractors to rat on their customers,” Lummis said.

“Bank customers are not subjects to the federal government. Banks do not work for the IRS.”