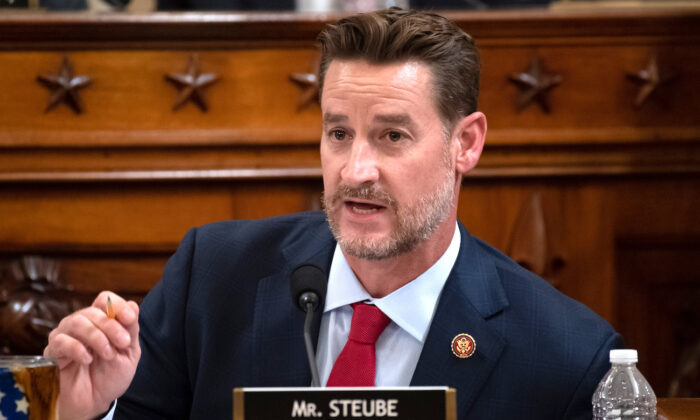 House Republicans are attempting to bring to the House floor a bill that makes it illegal for biological males to participate in sports designated for females.

Rep. Greg Steube (R-Fla.) and Rep. Jim Banks (R-Ind.) submitted a discharge petition on April 26 to bring “The Protection of Women and Girls in Sports Act” (H.R. 426) out of the Committee on Education and Labor, which did not act on the bill since Steube introduced it in the House in January 2021.

The bill is the first attempt at the federal level to bar transgender athletes from participating in single-sex sports by amending Title IX, a law that prohibits sex-based discrimination in educational institutions.

The bill would make it illegal “for a recipient of Federal funds who operates, sponsors, or facilitates athletic programs or activities to permit a person whose sex is male to participate in an athletic program or activity that is designated for women or girl.”

It would further recognize that, for Title IX, “sex shall be recognized based solely on a person’s reproductive biology and genetics at birth.”

The lawmakers would need 218 signatures to bring it to the House floor for a vote. As of April 28, 106 signatories stand behind the bill.

“Congress passed Title IX 50 years ago, but the left is now scheming to effectively destroy that important civil rights protection,” Banks said in an April 26 statement.

“House Republicans must respond by strengthening protections for female athletes and by forcing Democrats to publicly state whether they support women’s right to compete on a level playing field,” he added.

Steube, in a video posted on Facebook on April 26, said “Allowing biological men to compete in women’s sports has stripped talented athletes of records, rosters, and scholarships, including Sarasota’s own Emma Weyant who was robbed of her NCAA championship by a transgender athlete.”

“This radical agenda to obliterate the enduring differences between the sexes is draconian and erases women’s inherent dignity and status under the law,” said Penny Nance, CEO and president of Concerned Women for America Legislative Action Committee, a Christian advocacy group.

“This issue is nonpartisan,” she said in an April 22 statement.

The lawmakers’ move came as 27 parent-led organizations objected to the Department of Education’s plans to rewrite Title IX sex discrimination rules to extend its scope to transgender people in school settings and sports.

“For schools, this means that female sports teams, bathrooms, and locker rooms would be open to anyone who “identifies” as female, and vice versa,” the groups, representing 393,823 members, wrote to Secretary of Education Miguel Cardona on April 26. “With regard to sports, the Department’s new “gender identity” rule would rob girls and women of equal athletic opportunities by requiring schools to allow biological boys and men to compete in women’s athletics.”

The letter added, “the sweeping changes to Title IX that you are reportedly set to announce would erode the very rights that protect all students—regardless of sex— and ensure a safe and equitable learning environment.”

Conservative groups have highlighted the significance of this issue going into the midterms later this year.

“Make no mistake: defending women’s sports is fast becoming a litmus test issue for Republicans, and voters will be paying attention to where their representatives stand,” said Terry Schilling, president of American Principles Project, in an April 26 statement.